According to the American Customer Satisfaction Index (ACSI) Telecommunications Report 2019-2020, Disney+ has set the bar with an impressive debut, securing the top spot in video streaming – and across all five telecom categories – with an ACSI score of 80.

Last year’s leader, Netflix, has fallen to second place, slipping 1% to an ACSI score of 78.  Hulu, now controlled by Disney, and Apple TV App (formerly Apple iTunes) close in on Netflix, both up 1% to 77. The group of smaller streaming services shows massive improvement, rising 6% to match the industry average of 76, the same score as Amazon Prime Video (unchanged) and Microsoft Store (down 1%).

Four companies are just below the industry average with scores of 75: Starz (up 4%), CBS All Access (unchanged), Amazon’s Twitch (unchanged), and Google’s YouTube TV (unchanged).

Apple TV+ also makes its debut in the ACSI, but, VanAmburg says, “There’s nothing particularly ‘plus’ about Apple TV+.” The streaming service scores below average at 74, tying it with Google Play (down 1%) and AT&T’s HBO (unchanged).

AT&T TV NOW (formerly DIRECTV NOW) remains on the lower end of the industry despite gaining 4% to 72. Walmart’s Vudu drops 4% to 72, followed by CBS’ Showtime, unchanged at 71. DISH Network’s Sling TV falls 4% to match Showtime. Sony’s Crackle continues to be the least satisfying streaming service, unmoved at an ACSI score of 68. 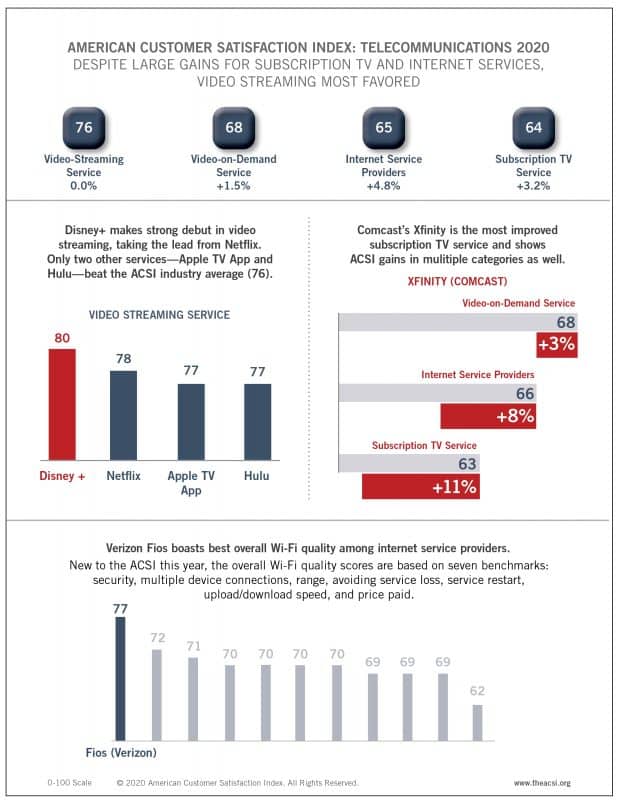 “With stay-at-home and work-from-home becoming a new normal for many American households, the services offered by major telecommunications companies are more crucial than ever before,” says David VanAmburg, Managing Director at the ACSI. “Fortunately, many telecom companies laid the groundwork before the pandemic, offering their customers better services compared to last year.”

Are you satisfied with Disney+ ?