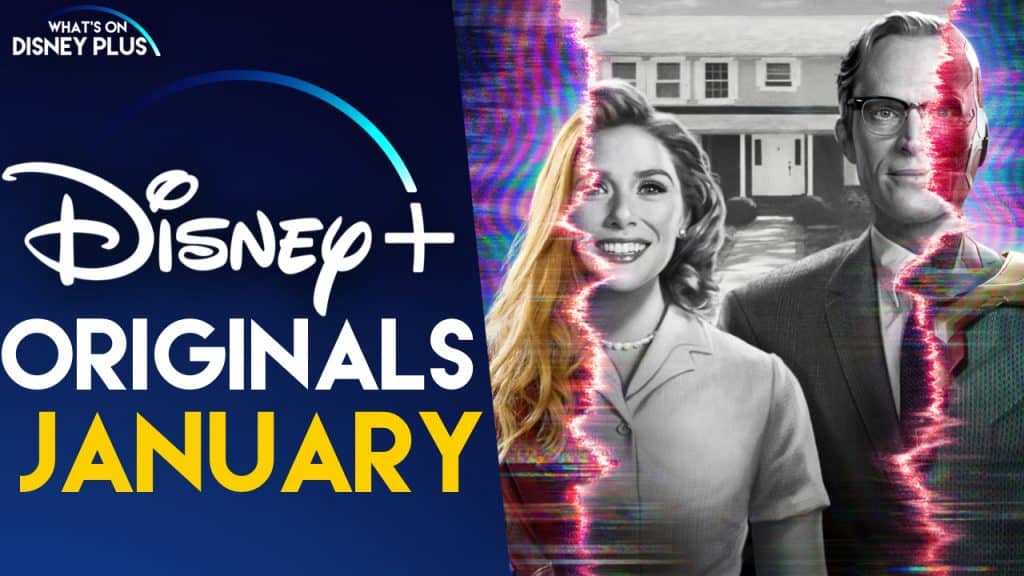 As we approach January, here is a look at all the new Original programming coming to Disney+, which includes a brand new Marvel series, “WandaVision”, along with lots of other new shows.

The biggest new Disney+ Original arriving in January is the first Marvel Studios series, “WandaVision” and it kicks off Phase 4 of the Marvel Cinematic Universe.  “WandaVision” is a blend of classic television and the Marvel Cinematic Universe in which Wanda Maximoff (Elizabeth Olsen) and Vision (Paul Bettany)—two super-powered beings living idealized suburban lives—begin to suspect that everything is not as it seems.

New episodes will be dropping weekly onto Disney+ from Friday, January 15th.

“Earth to Ned” is back to kick off the new year with 10 all-new episodes!  This series comes from the Jim Henson Company comes a late-night talk show hosted by alien commander Ned and his lieutenant Cornelius, who calls off the invasion of Earth after they fall in love with human culture. Broadcasting from the bridge of their spaceship, hidden deep underground, Ned and Cornelius interview Earth’s greatest resource, celebrities. With the help of the ship’s artificial intelligence, BETI, and the destructive CLODs, Ned must keep his show a secret from his home planet or suffer the wrath of his father, the Admiral of the Galactic Fleet.  Celebrity guests include Penn & Teller, Alyson Hannigan, Ginnifer Goodwin, Alan Tudyk, Yvette Nicole Brown and Kevin Smith.

All 10 episodes of “Earth To Ned” arrive on Disney+ on January 1st.

“Marvel Studios: Legends” serves as an exciting refresher for the various heroes and villains making their way to the highly anticipated streaming shows premiering on Disney+, setting the stage for the upcoming adventures. The first two episodes will feature Wanda Maximoff and Vision.

Grab a quick snack of Pixar! This collection of mini shorts stars your favorite characters in all-new, bite-size stories. Created directly by Pixar animators as a quick pop of Pixar fun.

The whole season arrives on Disney+ on Friday, January 22nd.

Throughout January, Disney is added new episodes of “Beyond The Clouds”, which is a behind the scenes look at the making of “Clouds”.  These episodes are available within the “Extras” section of the film.

What Disney+ Original are you looking forward to seeing in January?

Roger has been a Disney fan since he was a kid and this interest has grown over the years. He has visited Disney Parks around the globe and has a vast collection of Disney movies and collectibles. He is the owner of What's On Disney Plus & DisKingdom. Email: Roger@WhatsOnDisneyPlus.com Twitter: Twitter.com/RogPalmerUK Facebook: Facebook.com/rogpalmeruk
View all posts
Tags: disney, january