With the Coronavirus situation causing major disruption to Disney’s “upfront” events (Walt Disney Television use these events to sell advertising to companies), forcing them to become virtual presentations rather than physical events taking place in New York.

The latest Disney upfront presentation consisted of a 45 minute video, showcasing all of its different brands including for the first time, Hulu and Disney+.

During the presentation, which featured Jimmy Kimmel, who added entertainment to the presentation with lots of “roast” humor, along with other celebrities being featured such as American Idol host Ryan Seacrest, a montage of devices including iPads, laptops and phones was shown, featuring a clip from Disney+ Original show The Mandalorian, showing how Disney is now going all in on streaming.

Jimmy Kimmel joked about the success of Disney+ and how advertising isn’t allowed on it.

“We don’t have the Olympics. No one does. But we have something better than the Olympics. We have Disney Plus. Disney Plus is thriving. That’s right, our most successful platform is the one you’re not allowed to be on.”

He also made a joke about the head of Disney+ moving to Tiktok:

“We are a mess. We don’t know who our boss is. Kevin Mayer quit us to go work for Chinese identity thieves. Even our executives are leaving us for a younger audience!” 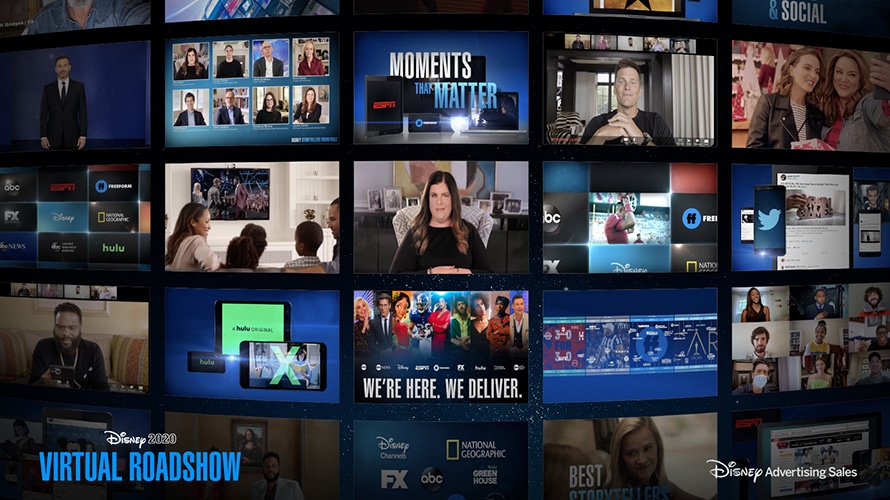 Most of the focus was on Hulu’s advertising system, with Ryan Seacrest saying:

The streaming service currently has 32.1 million subscribers in the US and about two-third of those are currently using the cheaper ad-supported version, with a third taking out the more expensive non-ad supported version.  Plus the addition of the Disney Streaming Bundle with Hulu, ESPN+ and Disney+ is resulting in more people bundling their products, though no numbers have been revealed.

Advertising is a major revenue stream for Hulu and is expecting to bring in $2.7 billion by the end of next year, according to a recent forecast by eMarketer.  Hulu will also be hosting its own upfront digital event on June 22nd.

Disney sale chief Rita Ferro told Deadline that it made sense to highlight subscription streaming — even an ad-free service like Disney+ — to an audience of brand marketers.

“As we think about our ability to form consumer relationships, it’s important to highlight all of the ways we do that, whether they’re ad-supported or not. Using data to create the products is important.”

She is also being very open about discussing Hulu and ESPN+ into all her conversations with ad buyers, adding:

“We are bringing out one unified ad product.  Clients will be able to buy one product across Disney and Hulu.”

While Disney+ might not be the main focus during the upfront events, it shows Disney is pushing all three of their streaming services to advertisers.

Roger has been a Disney fan since he was a kid and this interest has grown over the years. He has visited Disney Parks around the globe and has a vast collection of Disney movies and collectibles. He is the owner of What's On Disney Plus & DisKingdom. Email: Roger@WhatsOnDisneyPlus.com Twitter: Twitter.com/RogPalmerUK Facebook: Facebook.com/rogpalmeruk
View all posts
Tags: disney, hulu, Upfront