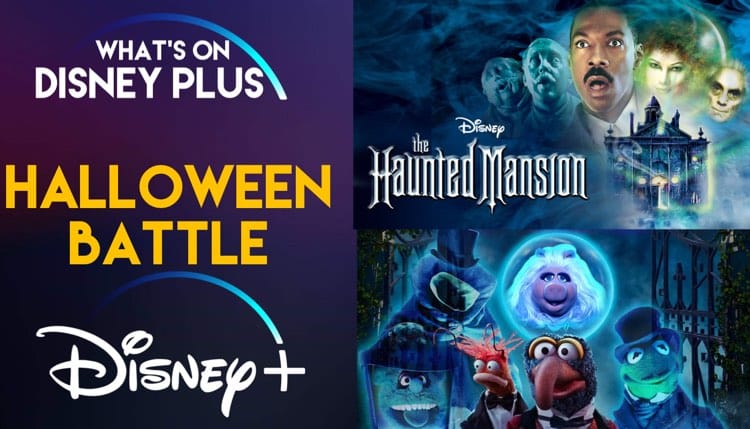 This is a special Halloween edition of my battle series, where I will be comparing and contrasting “The Haunted Mansi0n,” starring Eddie Murphy, and “The Muppets Haunted Mansion” special that was just added to Disney+ in 2021.

The main character of “The Haunted Mansion” is Jim Evers, a workaholic real estate agent who shows up at the mansion with his family to make a deal not realizing the ghosts that haunt the mansion want his wife to marry the ghost of the original owner because his butler killed her. That’s a confusing sentence to write, but the plot is pretty straightforward. Jim is unlikable most of the movie, but we’re supposed to be cheering for him to save his wife who he has never appreciated. That’s a hard task even at the end of the film. In “The Muppets Haunted Mansion,” Gonzo the Great has “won” the right to compete in a fear challenge at the home of his favorite magician who disappeared a century ago. Gonzo brings Pepe along and they are expected to die in the house, but Gonzo makes it through and rescues Pepe in just enough time to face his fears and get out of the house. That’s a far more interesting lead character. Point to “The Muppets Haunted Mansion.” “The Haunted Mansion” features a wide array of ghosts. Basically, everyone in the movie that’s not one of the Evers family is a ghost. There are some good ghosts, some bad ghosts, and some funny ghosts. Terrence Stamp does a great job as the ghost of the butler while Wallace Shawn basically plays the same character he does in every movie. The ghosts are probably the best part of “The Haunted Mansion.” In “The Muppets Haunted Mansion,” the ghosts are all played by well-known; or at least semi-well-known; celebrities. The point of the ghosts is not to advance the story, but to let you see who they got for a cameo. It’s a staple of Muppets movies and specials. It’s a lot of fun, but it doesn’t do much. I’m giving this point to “The Haunted Mansion.” But, I’m going to toss it over to you. Which do you think is better?

Jeremy has been a big Disney fan since he was a kid growing up during the Disney Renaissance. One day he hopes to go to every Disney Park in the world.
View all posts
Tags: Battle, disney, Disney+ Original, haunted mansion, muppets, muppets haunted mansion