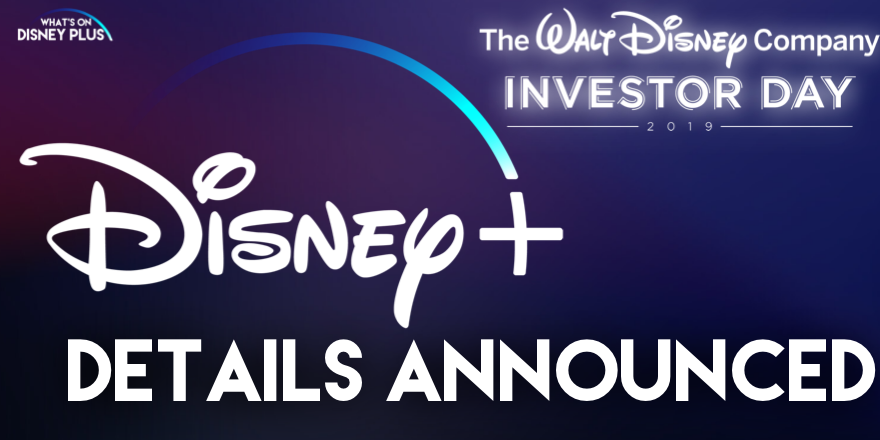 Today, the Walt Disney Company hosted its “Investor Day” event, which was focused on the Company’s direct-to-consumer streaming services including the upcoming Disney+.

Here is the official press release regarding the launch of Disney+:

The Walt Disney Company’s highly anticipated Investor Day provided an extensive overview of Disney’s comprehensive direct-to-consumer strategy, and included presentations on Hulu, Hotstar, ESPN+ and the upcoming Disney+ service, which will launch in the U.S. market on November 12, 2019, at $6.99 a month. The service will offer fans of all ages a new way to experience the unparalleled content from the company’s iconic entertainment brands, including Disney, Pixar, Marvel, Star Wars and National Geographic, and will be available on connected TV and mobile devices.

“Disney+ marks a bold step forward in an exciting new era for our company—one in which consumers will have a direct connection to the incredible array of creative content that is The Walt Disney Company’s hallmark. We are confident that the combination of our unrivaled storytelling, beloved brands, iconic franchises, and cutting-edge technology will make Disney+ a standout in the marketplace, and deliver significant value for consumers and shareholders alike,” Iger said.

Disney+ will launch in November with a robust library of theatrical and television content, and in its first year will release more than 25 original series and 10 original films, documentaries and specials by some of the industry’s most prolific and creative storytellers. New original titles for Disney+ announced today include:

Additionally, Disney+ announced that all 30 seasons of The Simpsons will be available on the service on day one. In the service’s first year, audiences will also have access to family-friendly Fox titles like The Sound of Music, The Princess Bride and Malcolm in the Middle as part of an impressive collection of more than 7,500 television episodes and 500 films including blockbuster hits from 2019 and beyond.

“We’re extremely excited about our growing portfolio of direct-to-consumer offerings. As we demonstrated today, with Disney+ we will deliver extraordinary entertainment in innovative ways to audiences around the world,” said Mayer. “We’ll continue to enhance the user experience with a constant pipeline of high-quality programming, making the service even more appealing to consumers.”

Today, Disney also unveiled a feature-rich product experience that makes it easy for subscribers to navigate, discover, and watch their favorite programming, with dedicated immersive branded tiles and dedicated pages for Disney, Pixar, Marvel, Star Wars and National Geographic. Subscribers will have the ability to create custom profiles, with each receiving personalized experiences curated to their unique tastes based on past behaviors and preferred content.

The Disney+ service will be available on a wide range of mobile and connected devices, including gaming consoles, streaming media players and smart TVs, and will adjust to the best possible high-definition viewing experience based on a subscriber’s available bandwidth, with support for up to 4K HDR video playback. An unprecedented amount of content will also be available to fans for offline viewing.

Following its U.S debut, Disney+ will rapidly expand globally, with plans to be in nearly all major regions of the world within the next two years.

Visit DisneyPlus.com to register your email and receive updates on the service.

Are you looking forward to Disney+ ?