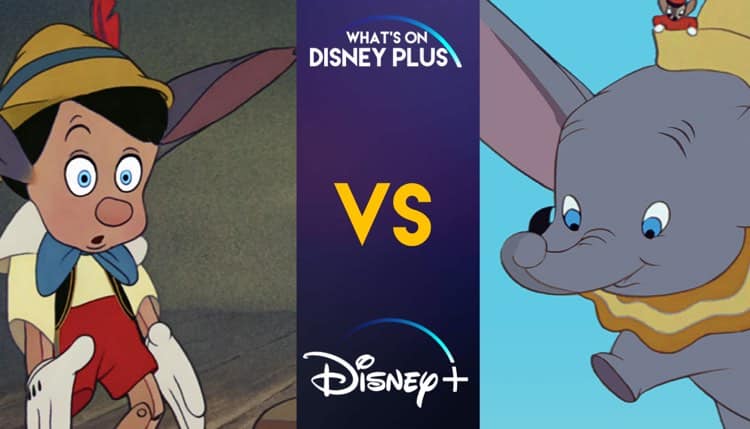 We’re back with another Disney+ battle. This week, it’s a battle of two of the classic films of Disney’s Golden Age of Animation as “Pinocchio” faces off against “Dumbo.” “Pinocchio” is the second feature length animated film produced by Disney while “Dumbo” is the fourth. So let’s take a look at who wins this classic battle.

The main character of both of these films are obvious from the names. Pinocchio is the main character of “Pinocchio,” while Dumbo is the main character of “Dumbo.” Pinocchio is a wooden puppet who is brought to life by the Blue Fairy. He must prove to be honest, brave and true to become a real boy. Dumbo is actually Jumbo Jr., the son of Jumbo. But, the other elephants call him Dumbo because of his big ears. Dumbo is trying to fit in at the circus while other animals make fun of him, kids harass him and the clowns make him do the dangerous stunts. In the end, Pinocchio becomes a real boy by nearly dying to save his father, Gepetto, from the whale, “Monstro.” And, Dumbo figures out how to fit in at the circus when the crows teach him to fly using his ears and “the magic feather.” Both are very interesting protagonists, but I’m going to give the slight edge to Pinocchio. Point to “Pinocchio.” There are two main antagonists throughout “Pinocchio.” The first is Honest John who keeps leading Pinocchio astray. He leads Pinocchio away from school to be an actor. Then, he leads Pinocchio to the boat to Pleasure Island. Later, after Pinocchio has escaped Pleasure Island, he goes out on the sea to help rescue Gepetto from Monstro. The whale swallows him whole, but Pinocchio is able to save Gepetto, Figaro and Cleo; nearly dying in the process. Meanwhile, there are also many antagonists throughout “Dumbo.” The other elephants who hate Dumbo because of his ears keep putting him down. The mean kids harass Dumbo to the point that Jumbo attacks them to protect him and forces the ringmaster to lock her up. Then, when Dumbo is made to perform with the clowns, they keep making him do incredibly dangerous stunts. This is tough because there are plenty of antagonists to choose from, but I’m going to give the edge to “Pinocchio.” I think Honest John has more of a direct effect on Pinocchio’s actions than any of the antagonists in “Dumbo.” Point to “Pinocchio.” “Pinocchio” has some of the best supporting characters of all time. Jiminy Cricket is the first that comes to mind as he serves as Pinocchio’s conscience. But, Gepetto is loving father figure. And, Lampwick shows Pinocchio what not to do when they are together on Pleasure Island. As for “Dumbo,” Timothy Mouse steps up and proves again that Disney really does its best with mice. While not as iconic as Mickey, Timothy serves a similar purpose for Dumbo as Jiminy Cricket does for Pinocchio. There’s also the crows that are racially insensitive by today’s standards, but serve as good guides to Dumbo. It would be nice if those characters were able to stand the test of time, because they are some of the most likable in their treatment of Dumbo. In the end, Jiminy Cricket is iconic. Point to “Pinocchio.” “Pinocchio” has the most iconic song in all of Disney. “When You Wish Upon a Star” is the song heard at the beginning of every single Disney movie. The song has really moved beyond “Pinocchio” and is the song that defines Disney. It also features the immensely popular, for its time, “No Strings.” Meanwhile, “Dumbo” has the very sweet “Baby Mine,” but the rest of its music is not as memorable. Point to “Pinocchio.” Here we are to the most subjective of the categories. The most memorable moments of “Pinocchio” to me are wishing upon a star, Pinocchio going to school and getting sidetracked by Honest John, “No Strings,” Pinocchio’s nose growing, Pleasure Island, Monstro and Pinoccho risking his life to save Gepetto. The most memorable moments of “Dumbo” are his big ears, him being made fun of and Jumbo trying to protect him, pink elephants on parade, “Baby Mine” and Dumbo flying. “Pinocchio” is just a little more memorable than “Dumbo.” Point to “Pinocchio.” It’s a clean sweep for “Pinocchio” which doesn’t surprise me. Yes, “Dumbo” was a bigger box office draw than “Pinocchio,” but box office success doesn’t necessarily equate to a film’s quality. These are two classics, but even before this battle, I thought “Pinocchio” was the better film.

But, which do you find to be the better film?

Jeremy has been a big Disney fan since he was a kid growing up during the Disney Renaissance. One day he hopes to go to every Disney Park in the world.
View all posts
Tags: Battle, disney, dumbo, Golden Age of Animation, Pinocchio, Walt Disney Animation Studios