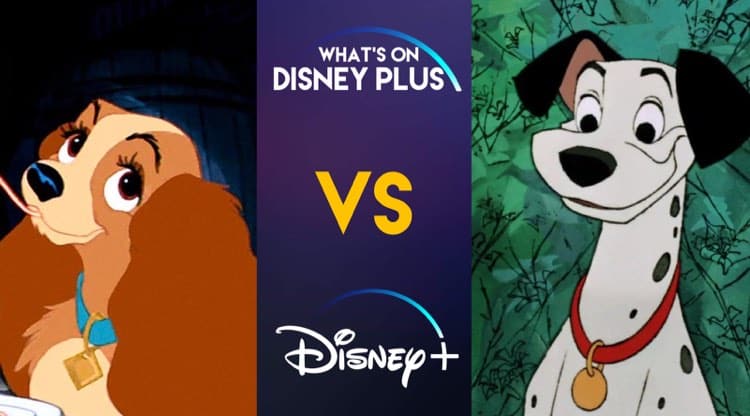 It’s time for another Disney+ Battle where we pit two animated Disney movies against each other and, completely subjectively, compare and contrast them to see which one is “better.” This week, in honor of the Puppy Bowl, it’s a battle of two of Disney’s best films about dogs. So, let’s see who wins between “Lady and the Tramp” and “101 Dalmatians.”

Both of these films have multiple protagonists. The main stars of “Lady and the Tramp” are Lady and the Tramp. Shocking, I know. Lady is cocker spaniel from high society who ends up locked out of her home by Aunt Sarah and goes on adventures with the Tramp until she is captured by the dog catcher. Meanwhile, the Tramp is a stray who makes it on his own but comes to Lady’s aid when a rat gets in the home to hurt her owner’s baby. In contrast, the protagonists of “101 Dalmatians” are the 99 dalmatian puppies and two adult dalmatians. They are either kidnapped or bought and the parents are saving all of the puppies. Both have great protagonists, but I’m giving the point to “Lady and the Tramp.” “Lady and the Tramp” has several antagonists throughout the film. There’s Aunt Sarah, the Siamese cats, the dog catcher and the rat. While only the rat is trying to hurt anyone, all are mean to Lady and/or the Tramp in some way. But, the big villain of “101 Dalmatians” is Cruella de Vil, arguably the worst villain in the Disney canon. Cruella want to kill and skin the puppies to make a dog-skin coat. She’s easily the better antagonist as she’s the worse villain. Point to “101 Dalmatians.” “Lady and the Tramp” features two wonderful supporting characters in Jock and Trusty who are always willing to help Lady. There are also several dogs at the pound who are trying to escape who help Lady learn more about the Tramp. The supporting characters in “101 Dalmatians” are mostly the dogs’ owners, Roger and Anita. They are wonderful owners who help the dogs become a family and then adopt the other dogs after Pongo and Perdita rescue them. There are also the dogs, cat and horse who assist with the midnight bark. All are great, but I think Jock and Trusty are the better supporting characters. Point to “Lady and the Tramp.” Both of these films have that one iconic song that sticks out from them. For “Lady and the Tramp,” it’s “Bella Notte.” For “101 Dalmatians,” it’s “Cruella de Vil.” Both have other songs, but none of them live up to the legacy of these two songs. Both of these songs are so iconic, they were both put on the “Now That’s What I Call Disney” Volume 1 collection. This is tough, but I think “Cruella de Vil” is a little more iconic. Point to “101 Dalmatians.” “101 Dalmatians” wins this battle, but it was very close, and I wasn’t sure who was going to win. But I want to know which film do you like better: “Lady and the Tramp” or “101 Dalmatians?”

Jeremy has been a big Disney fan since he was a kid growing up during the Disney Renaissance. One day he hopes to go to every Disney Park in the world.
View all posts
Tags: 101 Dalmatians, Battle, disney, lady and the tramp, Silver Age of Animation, Walt Disney Animation Studios