Disney+ Battle | Bambi vs. The Sword in the Stone

What's On Disney Plus > Blog > Brands > Disney > Disney+ Battle | Bambi vs. The Sword in the Stone 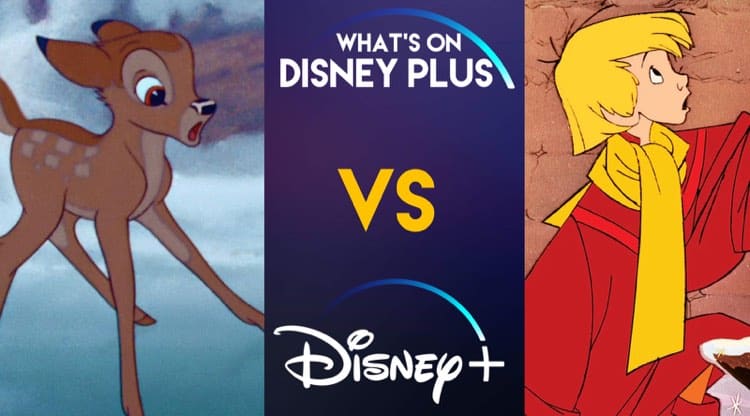 Disney+ Battle | Bambi vs. The Sword in the Stone

The main character of “Bambi” is, of course, Bambi. The film follows the deer’s life from birth right up until Feline gives birth to his child. He is the driving force of the film. The main character in “The Sword in the Stone” is Arthur, also known as Wart. He is a young boy who Merlin is trying to educate. At times, it feels like Merlin is more of the main character than Arthur is. Bambi moves the story along, while Arthur has the story happen to him. Point to “Bambi.” The villain of “Bambi” is the hunter, or Man. The hunters don’t pay attention to their campsite and cause a massive fire that endangers all the creatures of the forest. Earlier in the film, the hunters killed Bambi’s mother leading to him having to grow up faster than expected. Man is one of the most effective Disney villains without ever actually appearing on screen. Meanwhile, there are three main antagonists in “The Sword in the Stone.” The first two are Wart’s foster father and brother. Neither is actually villainous; they are just wanting Wart to complete his chores and serve as a squire. That’s not actually a bad thing, but it stands in the way of Wart’s wishes. The final antagonist is Madam Mim, who is definitively a villain. She lies, she cheats, and she tries to capture Wart and get rid of Merlin. But she is only a small part of the film. Man is more effective. Point to “Bambi.” Neither of these films are known for their music. “Bambi” does have the slightly memorable “April Showers,” but the score is what really drives that film. You can sense the urgency during Bambi’s battle to protect Feline and the fire making its way through the forest. You can sense the fear from Bambi and his mother as they flee the hunters, the relief Bambi has making it to their home, and the sadness when he realizes his mother didn’t make it. The score to “Bambi” is amazing. There are no memorable songs in “The Sword in the Stone” and while the score is decent, it doesn’t stand out. Point to “Bambi.” The memorable moments in “Bambi” are him being introduced to the forest, meeting his woodland friends, the first encounter with man, his mother’s death, getting twitterpated, the fire and Bambi leaving with the Great Prince of the Forest. The memorable moments of “The Sword in the Stone” include a squirrel not realizing Wart is actually a boy and falling in love with him, the duel between Merlin and Mim and Wart pulling the sword from the stone. “Bambi” is just more memorable. Point to “Bambi.” “Bambi” sweeps this round of the Disney+ Battle. It’s not that surprising given the legacy of “Bambi.” Personally, I enjoy “The Sword in the Stone” more, but I’m willing to bet I’m in the minority on that one. But I want to know which film do you think is better?

Jeremy has been a big Disney fan since he was a kid growing up during the Disney Renaissance. One day he hopes to go to every Disney Park in the world.
View all posts
Tags: bambi, Battle, disney, Golden Age of Animation, Silver Age of Animation, The Sword in the Stone