Mickey, Donald and Goofy are building a boat to set sail in the 1930s Walt Disney Animation Studios short, “Boat Builders.” Mickey Mouse orders a boat from a kit and works Goofy and Donald to build it. But, as with any animated short featuring these three, nothing comes easy and that ends up leading to all of them getting manhandled by the boat during the building process. Once it’s finally built, Minnie christens it with a bottle of wine, but that leads to it setting sail while still tied to the dock and coming apart when it reaches the end of its rope, leaving our three stars floating on what little bit is left.

This is a lot like a lot of other shorts featuring Mickey, Donald and Goofy. One of the three, usually Mickey, has a plan for what they are going to do. They start working on the plan and hijinks ensue. At least one, and sometimes all three, get hurt during the activity. And, in the end, everyone is right back where they started but we’ve seen some funny stuff happen to the trio. It’s formulaic, but it works every time. I always find myself laughing at whatever misfortune befalls the three of them. 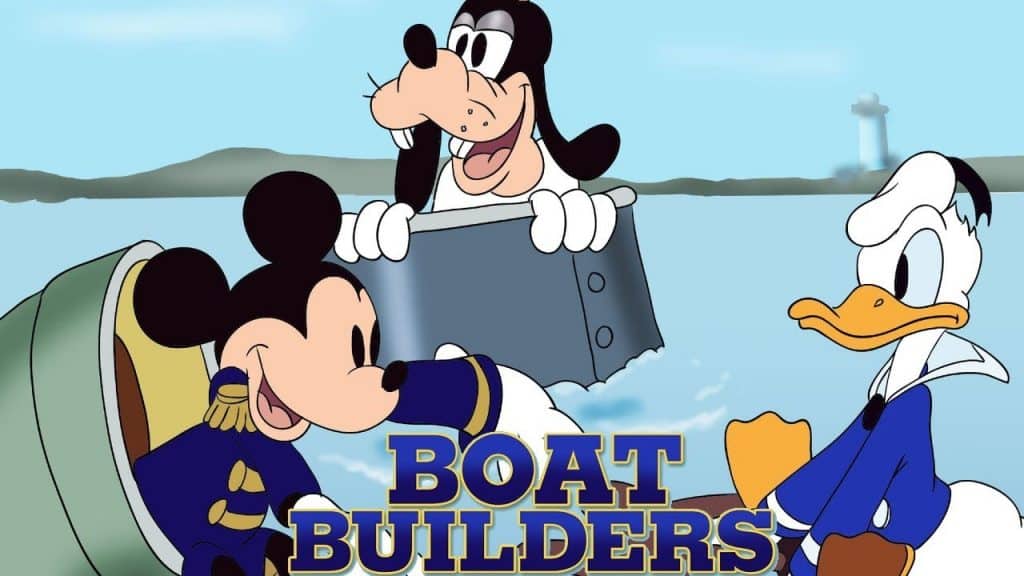 In these shorts from the 1930s, it’s usually the most fun to see Donald have the misfortune. Mickey is our hero, the one we’re all supposed to be rooting for. Goofy is just that, a loveable goof. It’s funny to see the things happen to him, but it’s not fun to see it. You laugh, but you still kind of root for him. But Donald could be downright mean in his early appearances. He wasn’t in this one, but he’s been mean enough over the shorts he’s appeared in that it’s fun to see him get comeuppance. Over time, he becomes very loveable in his own right, but he’s not quite there when this short came out.

There have been a lot of shorts like this one and there will be a lot more like this one. It’s a formula they are still using on “The Wonderful World of Mickey Mouse,” and it still works. No matter what hijinks or calamity ensues, we know these three will face it head on and we’ll love to see them rebound. It’s almost always fun.

What did you think of “Boat Builders?”

Jeremy has been a big Disney fan since he was a kid growing up during the Disney Renaissance. One day he hopes to go to every Disney Park in the world.
View all posts
Tags: Boat Builders, disney, retro review, review, Walt Disney Animation Studios