Be Our Chef: Episode 6 “Slimy Yet Satisfying” Review

What's On Disney Plus > Blog > Brands > Disney > Be Our Chef: Episode 6 “Slimy Yet Satisfying” Review

Be Our Chef: Episode 6 “Slimy Yet Satisfying” Review

The Perez and Platt families are back in the Disney kitchen to make another dish in the Disney+ Original cooking series, “Be Our Chef.” This episode they are making dishes inspired by the Disney Renaissance hit, “The Lion King.” The families were required to incorporate vegetables into a child-friendly dish.

I’m enjoying most of the opening scenes where you see them meet some of the characters and get inspiration for their dishes. As long as these scenes are kept short and to the point, they do a good job of giving you an idea of what the families are looking to do while also getting in the obligatory Disney promotions. I have one question about this opening scene, though. Why is Rafiki there? The episode title implies they are inspired from the scene where Timon and Pumbaa introduce Simba to the grubs. But, in the opening scene, the families meet Timon and Rafiki? Why not incorporate Pumbaa and/or Simba? Either would’ve made more sense than Rafiki.

Once again, the dishes look amazing. No matter your opinion of this show, the families come through with dishes that should make you want to try them. I, genuinely, hope the Disney chefs add some of these dishes to their menus because these families have come up with inspired ideas over the past six weeks and it would be great to see their hard work honored in the Disney parks. 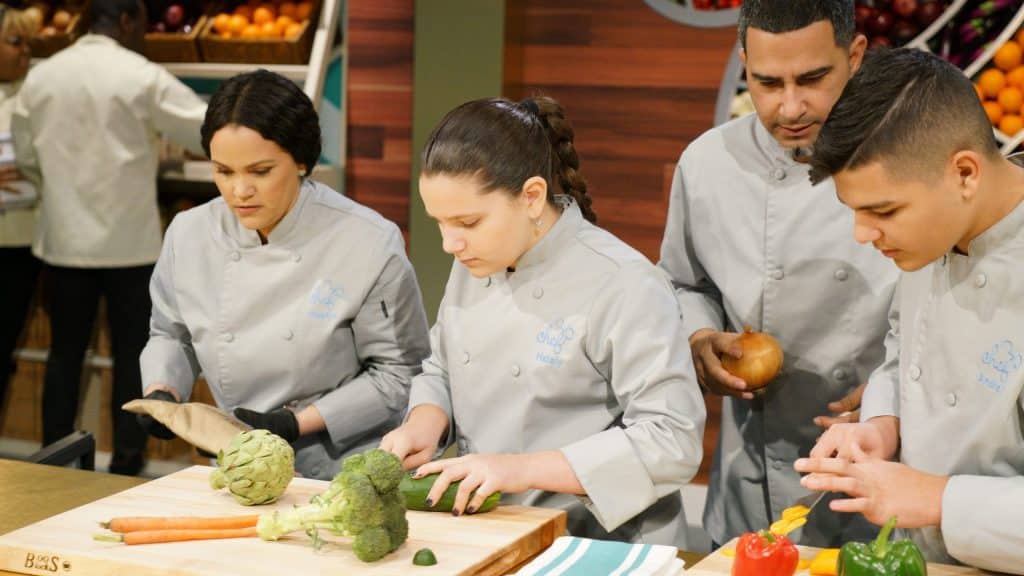 This week’s Garden Game is a puzzle of Simba holding a grub with a disgusted look on his face. It’s a perfectly fine game that adds a nice advantage to the game. But, in this competition, the Platt family sent both parents to the challenge while the Perez family sent both kids to the challenge. Part of me wishes the producers would require one parent and one child to the competition to keep it more even. That being said, I enjoyed the advantage being extra help for the winning family. I prefer the rewards being an advantage to the winner rather than a disadvantage to the loser and this is a nice way to incorporate Disney chefs into the competition.

Angela Kinsey is still not growing on me. I know she’s trying to show a passion for cooking and keep the energy up for the competition, but her presentation annoys me. I can’t really explain it. She’s not doing anything wrong, per se, but it just doesn’t appeal to my tastes.

Another week where my favorite part of the show is the judging. I love seeing the Disney chefs step up and judge the creations. They are far more fun to see than most celebrity chefs and I would love to see Disney+ to create a DocuSeries following them to see their process.

All in all, the show is still a lot of fun to watch as a family. It’s the perfect show to get inspiration for dinner and to cook with the family. I’m really enjoying the show and hope it returns for a second season.

What did you think of “Be Our Chef?”