Be Our Chef Episode 5: “Beyond the Reef” Review

What's On Disney Plus > Blog > Brands > Disney > Be Our Chef Episode 5: “Beyond the Reef” Review

Be Our Chef Episode 5: “Beyond the Reef” Review

The Merrill and Wells families are back in the Disney kitchen for “Be Our Chef” as they make dishes inspired by the film “Moana.” The two families have to make seafood dishes reminiscent of when Moana set sail to try and save her people. It’s a battle between the Kakamora’s Catch of the Day; featuring lobster, bacon wrapped steak, asparagus and homemade pico de gallo; and the Wayfinder’s Canoe; featuring a deep fried sweet potato, avocado and cod.

Once again, both dishes look absolutely amazing and I’m interested in seeing if we can try these for dinner at my house. I love how the kids are involved in the competition and are showing a passion for cooking. For some, it might be a career, while for others, it might just be a hobby, but it’s inspiring to see the joy on their faces as they get to try to cook new dishes and how they can tie them back to their love of Disney.

The challenge this week was interesting as it was just a baseball toss, but the winner got additional help from one of the guest chefs which I think was a wonderful prize. I’ve said how i like the concept of the mid-competition game to earn an advantage, but some of the advantages have been better than others. Being able to seek advice from a professional chef is one of the advantages I like and gives extra incentive to win future challenges. 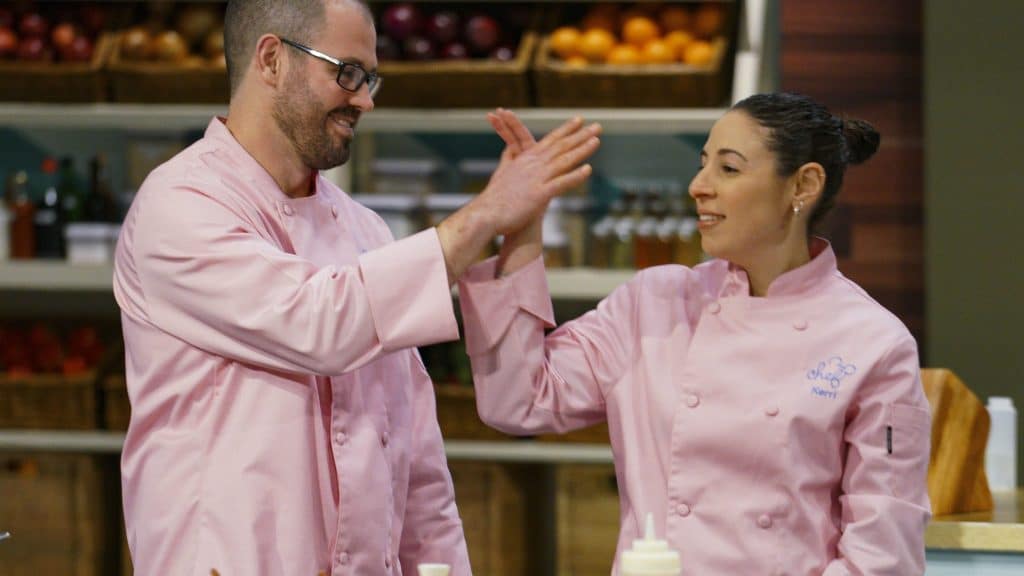 I’m still only a marginal fan of the scenes showing the families meet the characters who inspired the week’s episode, but something I enjoyed about this one is how they went to a portion of Epcot and got to see who fresh produce is grown on the grounds. On top of meeting characters from movies, they also got to see how some of the ingredients they are using came to be. It’s simple, yet effective for a cooking show.

In this episode, we get to meet the third of our celebrity chef judges. In the first four episodes, two other chefs judged two episodes each. It was nice to see this third chef and to see how the man who comes up with some of the menus at Disney restaurants judged the dishes being made. From an adult standpoint, I’d like to see a series following the Disney chefs at their jobs and to see how they do what they do. While the show is great for a family setting, when I’m watching alone, I’d rather see what the chefs are doing. I think that’s a reality show Disney+ could pursue that would appeal to adults.

Once again, this series has been a lot of fun to watch from a family aspect. A friend of mine reached out and said his daughter loves cooking shows and he loves having a wholesome cooking show like this to show her. It’s good clean fun, but it works best in a family setting. I’m not saying an adult can’t watch this alone and enjoy it, but I believe it’s more fun when you watch it with children.

What did you think of this episode of “Be Our Chef?”