Be Our Chef Episode 4: “Curiouser and Curiouser” Review

What's On Disney Plus > Blog > Brands > Disney > Be Our Chef Episode 4: “Curiouser and Curiouser” Review

Be Our Chef Episode 4: “Curiouser and Curiouser” Review

The Perez and Robbins families are back for round 2 in the Disney+ Original Cooking Show “Be Our Chef.” This week the families take inspiration from “Alice in Wonderland” to make a tea party themed dessert.

I continue to be in awe of what these families can do in just an hour. Each week I come away hungry and wanting to try the foods the families make. This week that features a Queen of Hearts Chocolate Raspberry Tart and a Mad Hatter Matcha Tea-Cup-Cake. Both look delicious and can be used as inspirations for fun cooking with your family.

The format for this show remains the same which makes it easy to follow. I enjoy the family competition aspect and while I don’t always understand why they are performing the particular challenge in the middle of the competition, I like the concept of taking a minute and trying to secure an advantage. I also like the advantage isn’t the same each and every week, although I’m still not a fan of forcing the other family into a timeout. The additional five minutes for the winning family and the subtraction of five minutes from the losing family are nice additions that help the competition heat up. 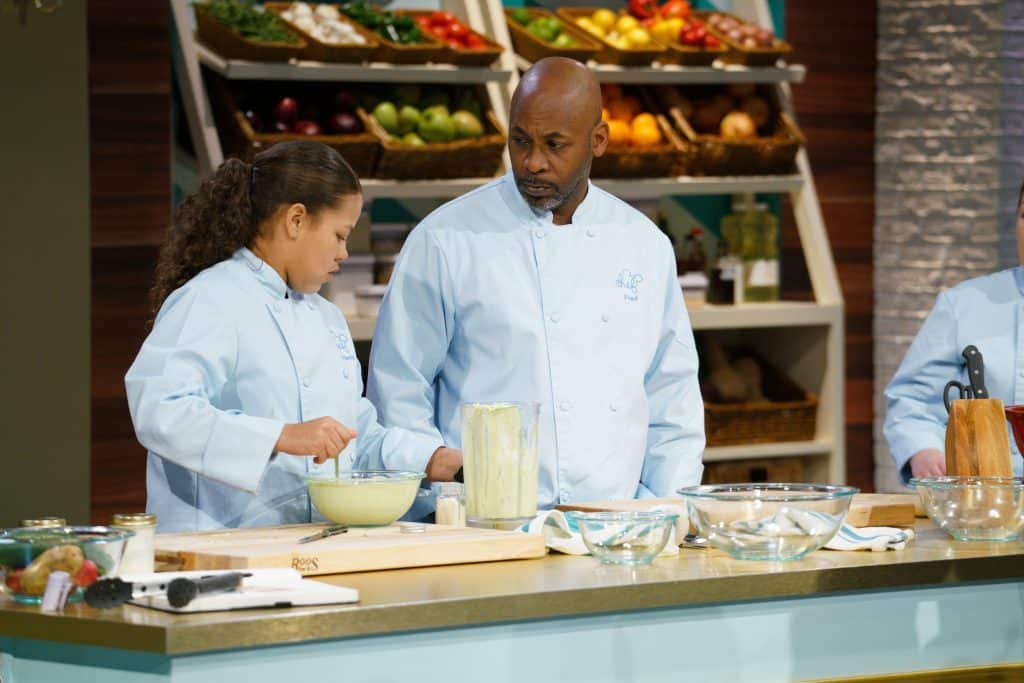 This week the scenes showing the families interacting with characters based on the film that inspired the dish seemed to drag. Like the “Cinderella” episode, it felt long. I’m not sure why the “Big Hero 6” and “Mulan” episodes felt so much shorter but I enjoyed the flow of those episodes a little more than I did here.

I’m also still not thrilled with the host. Angela Kinsey popped around the two families and even took a raspberry from the Robbins family while they were planning out their dish. I don’t know if it’s not the right fit or if she’s not comfortable in the role yet, but the show flows better when the producers and directors just focus on the families and don’t incorporate the host too much. She’s obviously needed to introduce the dish, run the challenge in the middle of the competition and to handle the ending announcements, but beyond that, she’s not necessary to the show. In the middle, it feels like the show would benefit greatly from less of her. I hope she finds a rhythm soon.

I would also like to hear more from the judges. Each week, they’ve had one judge make the final decision. We know they have more than one Disney World chef serving as a judge, so I’d like to see the lead judge from each week confer with the other chefs. I understand the type of dish may lend itself to one judge’s specialty and that judge will make the final decision, but it would be nice to see he or she leaning on her colleagues for their opinions. I’m hopeful the finale will have a combined score from each of the dishes. On a cooking show, I care more about the judges with legitimate credentials than I do about a host famous for appearing on a sitcom. If I had my way, more time with the chefs and less with the host.

Overall, I still enjoy watching this show each and every week. I’m hopeful for what I’m seeing. And, I’m getting new ideas each week for something I’d like to have with my dinners.