What's On Disney Plus > Blog > Brands > Disney > Be Our Chef Episode 111: “The Spectacular Finale” Review

The final two families face off in the Disney kitchen in the finale of season one of “Be Our Chef.” In the finale, the two families must make two dozen desserts in two hours with the winning family earning a Disney cruise. The Wells Family makes a lemon meringue dessert, while the Robbins Family makes a baklava inspired by “Aladdin.”

I’ve said many times in these reviews I wanted to see the families make something with each course of the meal for the finale. They didn’t do that here, but making two dozen treats isn’t a bad way to wrap up the family. It’s a lot easier to make one small dish for a judge to sample than it is to make two dozen, so the families were definitely put to the test and I appreciate the finale being more complicated than the qualifying rounds.

There was no meeting of characters this time as the dishes didn’t have to be inspired by a particular movie. Disney found a way to get its fluffy advertisements in without showing the characters in the park. It made the show feel more important. It got to the cooking faster and added a level of intensity. Again, I think this was the correct decision for the finale and a great way to beef up the importance.

We’ve seen many Disney characters during the first 10 episodes of this series. It’s only fitting that the mouse that started it all make an appearance in the finale. We see Mickey Mouse in the Garden Game segment where he brings a giant spatula to host Angela Kinsey. Then, he appears later to visit the families and give hugs in the middle of their cooking. I’ve loved Mickey Mouse since I was a kid, so I’m always excited to see him on screen. With no set movie for inspiration, I think it was a great idea to bring Mickey in to visit the families. If this show gets more seasons, I’m hopeful episodes without a clear movie inspiration will get some other of the main Disney line to show up. Minnie, Donald, Daisy, Goofy and Pluto would all be great additions. And, while it was clearly Disney promoting itself, it felt more natural than the introductions in the park did. I can believe Disney would send in one of the Mickey and Friends crew to visit a show airing on its app. 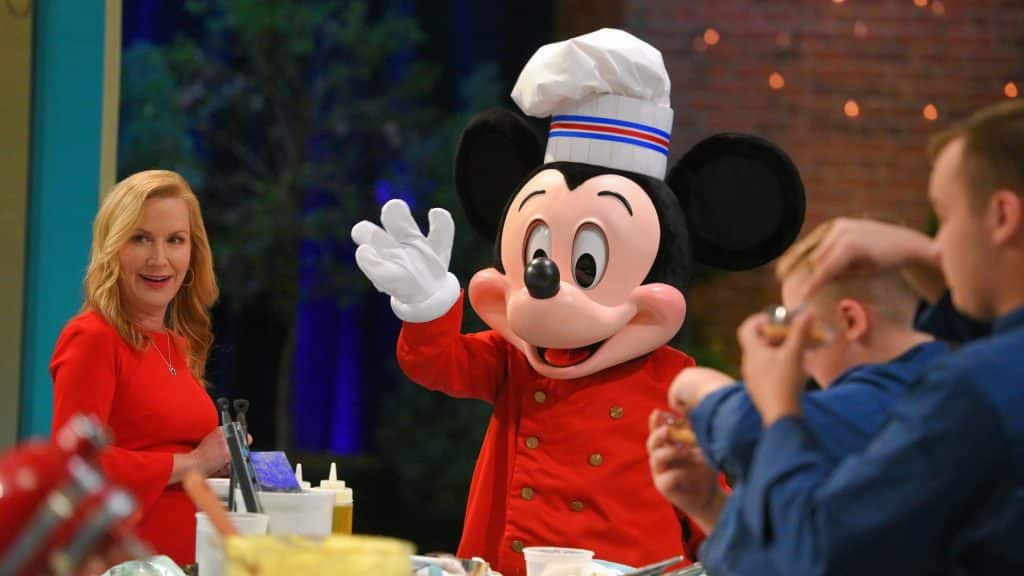 The finale also went all out with the judges. Instead of having one judge make the decision, five judges decided which dessert won. We bring back the four chefs we’ve already met this season and a fifth who is the Vice President of Food and Beverage Concepts at the Walt Disney World resort. I think it’s very important to bring in multiple chefs for this one. Plus, introducing someone so high up the food chain; no pun intended; at Disney is a good way to work in the top.

At the end, we find out why they wanted two dozen treats as the other three families to compete in this series, along with Angela Kinsey’s family and the judging chefs each got to try their own treat from each family. It’s a nice way to wrap the season and bring back the families that took part. The competition made all the families better cooks and I think that’s great to see them celebrating together.

The Robbins family won with their baklava, earning Disney cruise vacation. Given world events, it’s an odd prize, but clearly no one knew a pandemic would be hitting the world at the time this series was filmed. Congratulations to the Robbins family. This has been an adorable show that a family can watch together. I wouldn’t recommend it to adults without kids, because it will seem a little juvenile, but it was an excellent show to watch with my son.

What did you think of the finale of “Be Our Chef?”