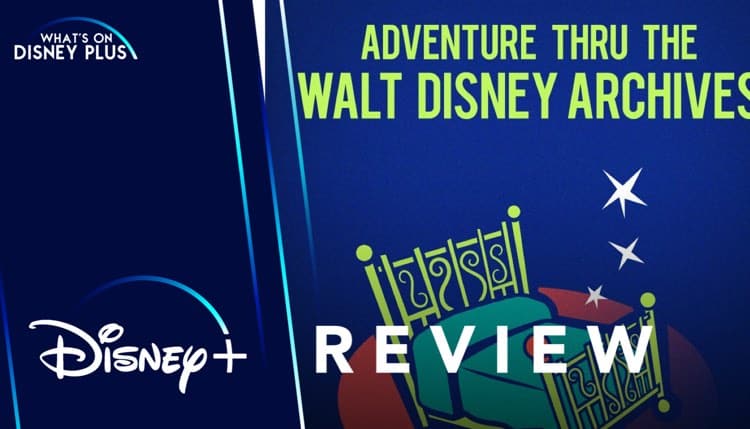 Legendary producer Don Hahn gives us a tour through the iconic Walt Disney Archives in this new documentary on Disney+. Hahn gives the viewers a tour through some of the greatest bits of history of the Walt Disney Company; introduces us to early documents, World Series rings, Disneyland attraction vehicles, the Disney Legends park, and finally Walt Disney’s office. We get to meet some of the archivists who keep the history preserved. We get to hear from some of the Disney Legends whose lives have been changed by Disney; like Mark Hamill, Kurt Russell, and Richard Sherman. And, we get to see the place where Walt Disney and his many collaborators worked on the next great project for the fans.

This documentary first premiered last year for D23 gold members. While that was very cool for the gold members, it would’ve been cooler to drop this on Disney+ then. It’s something that would’ve added great documentary content during last year’s content drought due to the pandemic. I appreciate Disney wanting to reward the people who have signed up to be D23 gold members, but as we all know 2020 wasn’t a typical year, and I think premiering this on Disney+ would’ve been a nice addition. I’m glad it’s there now and I’m glad I got to see it.

It was really cool to see some of the people who have been a part of Disney for so long step in front of the camera and show appreciation for the Walt Disney Archives. From archivist Becky Cline to Marvel head Kevin Feige to Pixar head Pete Docter to former CEO and current Chairman Bob Iger, a collective of great people who have helped make Disney what it is today take a moment to appreciate the work of the archives. It’s nice. It’s heartwarming. And, as a Disney fan, it reassures me that the people who help create the magic are just as blown away by it as the rest of us are. While many documentaries can be very dry, I love the funny moments in this one. I love Hahn insisting he can’t go to Disneyland because he needs to go to Walt’s office only for the next scene to show him eating a corn dog at Disneyland. I love Mark Hamill using the force to convince Hahn to go to digitization, and again the corndog causing issues for Hahn. And, I loved Becky Cline using the bedknob from “Bedknobs and Broomsticks” to teleport out of Disneyland leaving Hahn confused. There was some fun added to the information and I love it.

What did you think of “Adventure Through The Walt Disney Archives?”

Jeremy has been a big Disney fan since he was a kid growing up during the Disney Renaissance. One day he hopes to go to every Disney Park in the world.
View all posts
Tags: Adventure Through the Walt Disney Archives, disney, documentary, review