At the D23 Expo event this weekend, Disney offered guests a special promotion of 3 years subscription to Disney+, with 33% discount and a free pin.

Now the event is over, Disney has extended the offer to D23 Members, until September 2nd.  Which brings the price down to just $3.92 a month, though the entire three years subscription has to be paid in advance, which is around $140 plus taxes. 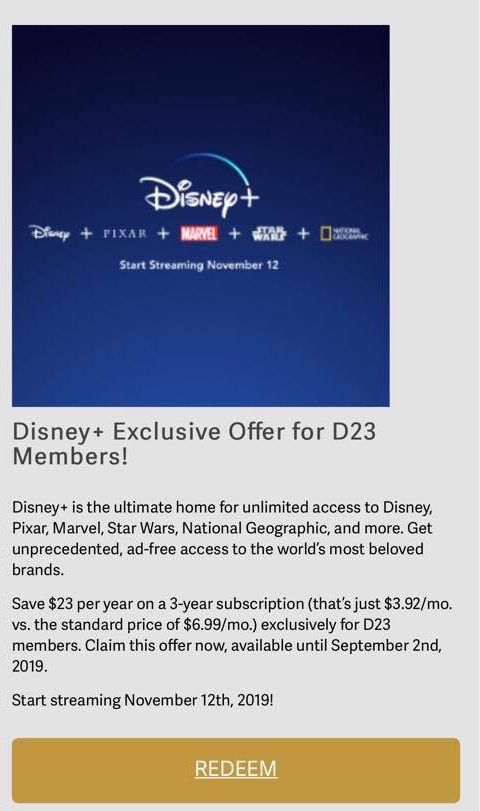 The offer is only open to residents of the United States, with a US payment payment method and can be accessed via the official D23 website.  Simply log into your account and you will be presented with the offer.

This is open to both Gold (paid) and Standard (free) members. Many members of our Disney Plus Facebook Group are reporting conflicting reports of being offered the offer within their D23 account.  This could be because they are offering the promotion in waves to stop any technical issues with overloading subscriptions on the first day.  So it’s worth rechecking later in the week.   Disney has also confirmed if you have sign up today, it will take 24 hours before the link becomes available.

Will you be signing up for 3 years worth of Disney+ ?

Roger has been a Disney fan since he was a kid and this interest has grown over the years. He has visited Disney Parks around the globe and has a vast collection of Disney movies and collectibles. He is the owner of What's On Disney Plus & DisKingdom. Email: Roger@WhatsOnDisneyPlus.com Twitter: Twitter.com/RogPalmerUK Facebook: Facebook.com/rogpalmeruk
View all posts
Tags: d23, disney, front