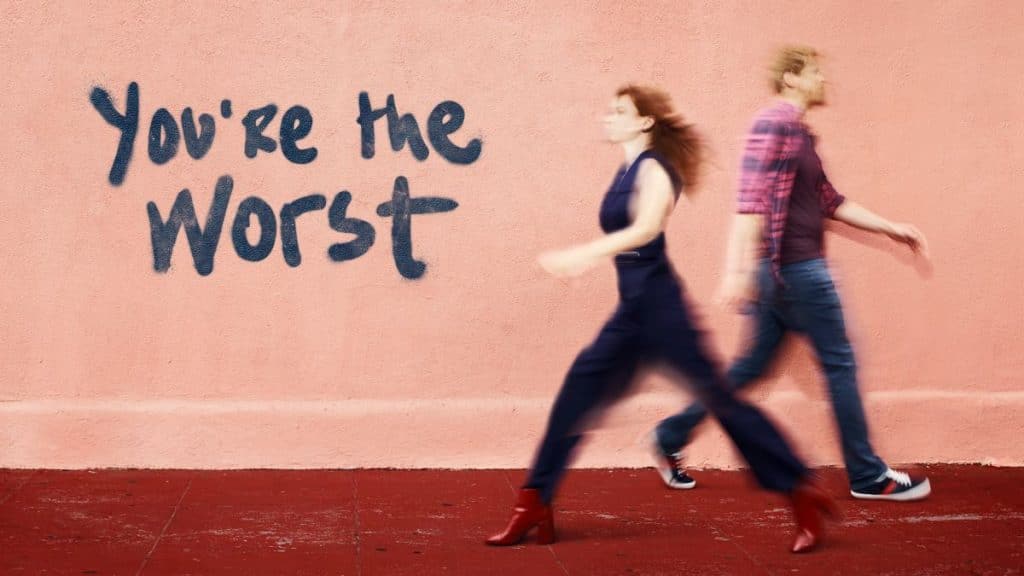 Disney has announced that all five seasons of the FX series, “You’re The Worst” will be coming to Disney+ in Australia and New Zealand on Wednesday 30th March 2022.

“You’re the Worst” is a modern look at love and happiness told through the eyes of two people who haven’t been very successful with either. It’s the story of Gretchen and Jimmy, fear, heartbreak, romance, sex, food, Los Angeles, Sunday Funday, friendship, and the fact that sometimes the worst people make the best partners. An original comedy from writer and executive producer Stephen Falk, You’re the Worst puts a dark twist on the romantic comedy genre.

An original comedy from writer and executive producer Stephen Falk, You’re The Worst puts a dark twist on the romantic comedy genre. Narcissistic, brash, and stubborn Jimmy Shive-Overly has inadvertently found himself paired up with cynical, people-pleasing, and self-destructive Gretchen Cutler. So when they meet at a wedding, it’s only natural that the two of the go home together and, despite their better judgement, begin to find themselves falling for each other.

“You’re The Worst” was nominated for a Critics’ Choice Television Award for “Best Comedy Series” in 2015 and 2016, and the series earned a TCA Award nomination for “Outstanding Achievement in Comedy” in 2016. In 2017, costumes and props from the series were featured as part of a curated exhibition in The Museum of Broken Relationships in Los Angeles.

The series is also available on Disney+ in other countries including Canada.

Are you looking forward to watching “You’re The Worst” on Disney+?

Roger has been a Disney fan since he was a kid and this interest has grown over the years. He has visited Disney Parks around the globe and has a vast collection of Disney movies and collectibles. He is the owner of What's On Disney Plus & DisKingdom. Email: Roger@WhatsOnDisneyPlus.com Twitter: Twitter.com/RogPalmerUK Facebook: Facebook.com/rogpalmeruk
View all posts
Tags: you're the worst