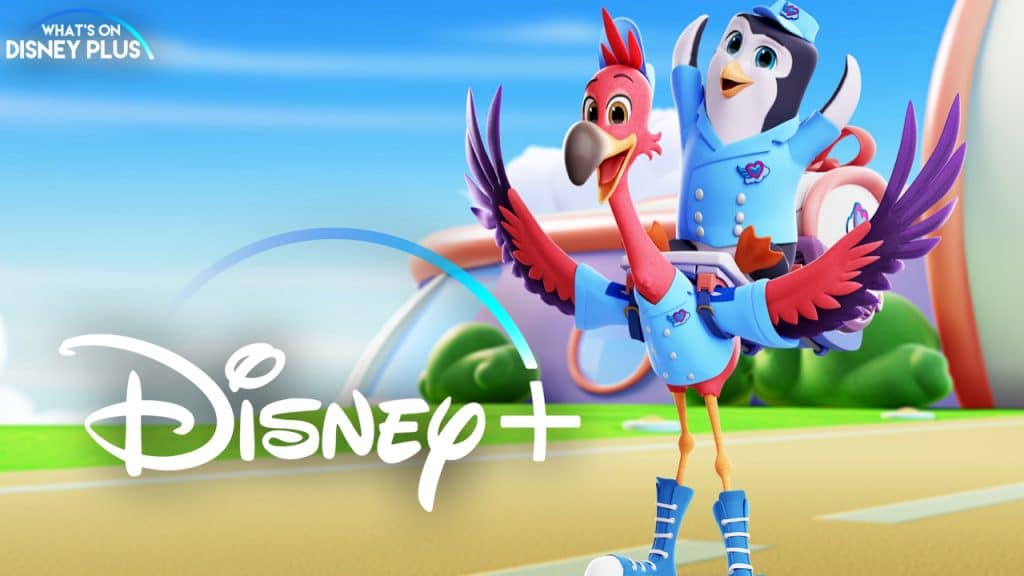 One of Disney Junior’s latest shows is “T.O.T.S” and many fans have been asking when it will be coming to Disney+.

T.O.T.S is a heartfelt animated comedy series for preschoolers, that explores the hilarious adventures of best friends Pip and Freddy, a tenacious penguin and a kind-hearted flamingo, who are the only non-stork delivery birds in-training at Tiny Ones Transport Service (T.O.T.S.). As new members of the esteemed team, these junior flyers must use tender care in taking baby animals—kittens, cubs, calves, bunnies, puppies and joeys among them—from the nursery to their forever families around the globe.

The reputable T.O.T.S. organization is run by Captain Beakman, a tough but fair pelican who leads her team with efficiency and encouragement. She has a soft spot for Pip and Freddy, who have just landed their dream job as the newest junior flyers hoping to earn their wings. Pip is a determined and loyal problem-solver while Freddy is nurturing, upbeat and a little silly. In each episode, the loveable oddball duo must work together to overcome challenges and navigate adventures in order to earn a stamp in their handbooks—one for each successful delivery.

Set in a vibrant minicity in the sky, T.O.T.S. is a safe and magical starting point for baby animals. Upon arrival, they are tended to by K.C., a playful, free-spirited koala who runs the nursery with love, patience and expert care. When it’s time to depart for their forever homes, each adorable animal is placed in a customized crate specific to their needs. Every delivery bird has a Flypad which signals that it’s time to send another bundle of joy on its way, uniting the precious babies with their families around the world.

With the first season due to finish airing on Disney Junior in the United States on Friday July 10th, so it is likely to be added to Disney+ a month later.  This has been when previous Disney Channel shows such as “Raven’s Home” and “Star Wars: Resistance” have been added to Disney+.

Hopefully Disney will start releasing shows on Disney+ in smaller batches, as they have started in Australia/New Zealand, especially when a show is on hiatus, since the first season of T.O.T.S has had multiple hiatus, resulting in the first season taking over a year to air on Disney Junior.

Created for kids age 2-7, the series is designed to communicate themes of friendship, nurturing, perseverance and accepting other’s differences through relatable characters, humorous situations and a variety of charming baby animals. Each episode features two 11-minute stories that highlight the use of creative thinking, teamwork and problem solving to model for young viewers that there is more than one way to achieve a goal. Music also plays an important role in the series with a new original song in every episode, in addition to the recurring delivery tune “Bringing This Baby Home.”

Are you looking forward to seeing T.O.T.S on Disney+?

Roger has been a Disney fan since he was a kid and this interest has grown over the years. He has visited Disney Parks around the globe and has a vast collection of Disney movies and collectibles. He is the owner of What's On Disney Plus & DisKingdom. Email: Roger@WhatsOnDisneyPlus.com Twitter: Twitter.com/RogPalmerUK Facebook: Facebook.com/rogpalmeruk
View all posts
Tags: t.o.t.s, tots