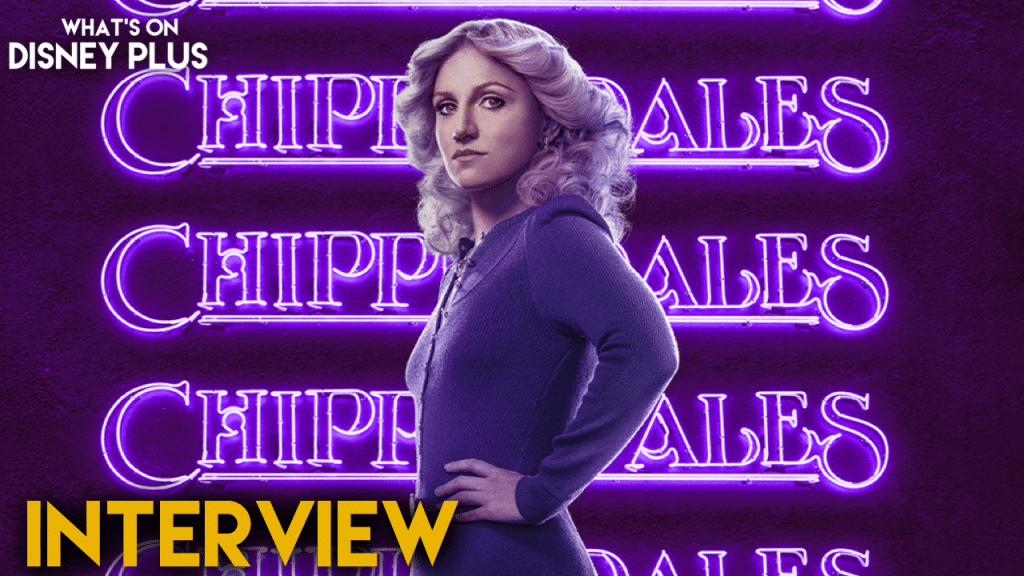 This month, Disney+ subscribers in the UK and Ireland are going to be treated to a new limited series from 20th Television, called “Welcome To Chippendales”, which is a sprawling true-crime saga, “Welcome to Chippendales” tells the outrageous story of Somen “Steve” Banerjee, an Indian immigrant who became the unlikely founder of the world’s greatest male-stripping empire – and let nothing stand in his way in the process.

Recently, I got to speak with Annaleigh Ashford about her role, Irene Banerjee, in the new series, which is coming to Disney+ in the UK and Ireland on January 11th 2023.

What was one of your highlights of working on “Welcome to Chippendales?“

“Yeh, first I think this is such an interesting, complicated story!   It takes place in the 70s, 80s and the early 90s, and I think any Period show now forces us to ask questions the way that we looked at our life, the way we lived our life in that period and era.   Certainly, as a woman in this, I found it extremely relevant.   I played a woman who’s not only a businesswoman, a woman trying to make a name for herself and tied to my husband, who’s my business partner. I feel it was really important we watched her be strong and stand up for herself but also navigate the pressures of the patriarchy. “

She stands up for herself when she can longer stay, so in the end, I was really grateful to play a woman who stood up for herself.   But the show is delightfully complicated not only is there the sex and the magic that you want there to be with the Chippendale dancers, but there’s also murders and crime, a lot of love, heartbreak, also a lot of unexpected hearts, so I think a lot of people are going to be surprised how dynamic it is! “

What was your biggest challenge working on this new series?

“I think the biggest challenge for me on this show was making sure that Irene wasn’t a compliment to Steve, and that she had her own arc.  She could of easily just have been apart of his story, but I wanted to make sure that the audience watched her grow and change, especially so that when she leaves at the end, it’s earned.

You know a lot women stay until they can’t stay until they can’t stay any longer, and this is absolutely Irene’s journey. I’m proud of her I’m proud of the choices she makes in the end and ultimately so heartbroken for her because I think the love story between these two is so pivotal, it makes it even harder for her for her to walk out the door, also harder for us to walk out the door.”

“Welcome To Chippendales” is coming to Disney+ in the United Kingdom and Ireland on Wednesday 11th January 2023.  The entire season is also available to stream now on Disney+ in many countries including Australia, New Zealand and Canada, plus on Hulu in the United States.

Roger has been a Disney fan since he was a kid and this interest has grown over the years. He has visited Disney Parks around the globe and has a vast collection of Disney movies and collectibles. He is the owner of What's On Disney Plus & DisKingdom. Email: Roger@WhatsOnDisneyPlus.com Twitter: Twitter.com/RogPalmerUK Facebook: Facebook.com/rogpalmeruk
View all posts
Tags: “Welcome to Chippendales”, interview