Pixar brings the old friends from the “Toy Story” universe back for one last adventure. This time, Woody, Buzz, Jessie, Rex and the rest of the gang are helping Bonnie adjust to Kindergarten.

The movie gives us an explanation as to why Bo Peep wasn’t in “Toy Story 3” with the rest of our friends, as she was donated in the events between “Toy Story 2” and “Toy Story 3.” This becomes important later when Woody and new friend Forky get lost on a road trip and while trying to get back to Bonnie, Woody finds Bo’s lamp in an antique shop. Together Bo helps Woody and Forky get back to Bonnie. But, it’s at the end where Woody learns a new lesson in the series’ central theme of getting home. I look forward to checking out the Disney Plus short “Lamp Life” to see what happened from when Bo Peep was donated until Woody found her again.

The film makes me feel very nostalgic given I was 10-years-old when the first “Toy Story” was released. We’ve seen Woody and Buzz escape Sid’s house to get back to Andy, Buzz and friends rescue Woody from a toy shop sending a complete set of Woody’s Roundup toys to a collectors in Japan and the entire gang escape Sunnyside Daycare to start a new life with Bonnie while saying goodbye to Andy. Now, Woody helps Forky get back while reuniting with Bo and meeting new friends along the way. 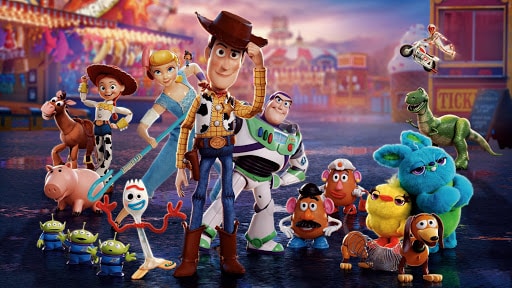 Forky is an interesting new addition to the cast of characters. Bonnie makes Forky during Kindergarten orientation and the Spork can’t wrap its head around the fact that it’s now a toy not trash. Along the way, they meet Gabby in the antique store. The doll, presented as the villain, isn’t as diabolical as Stinky Pete or Lotso Bear from the previous films. She really wants the same thing Woody wants, a kid to love.

As a fan of the series for almost 25 years, this is a fun time. As I saw Woody and Buzz on screen again, I was taken back to 1995 when I first saw the original “Toy Story.” The sounds of Tom Hanks and Tim Allen together are soothing to me. And, I enjoyed how they worked in unused dialogue from Don Rickles as Mr. Potato Head despite his passing in 2017.

If I have one complaint about “Toy Story 4,” it’s that it felt slightly out of place compared to the previous three films. The ending of “Toy Story 3” had such a finality to it that another feature length film has never felt necessary. The continued stories of the toys in the shorts and the tv special felt like enough once the toys moved from Andy to Bonnie. But, needed or not, “Toy Story 4” sure was a good time that I love to share with my kids.

Jeremy has been a big Disney fan since he was a kid growing up during the Disney Renaissance. One day he hopes to go to every Disney Park in the world.
View all posts
Tags: pixar, toy story