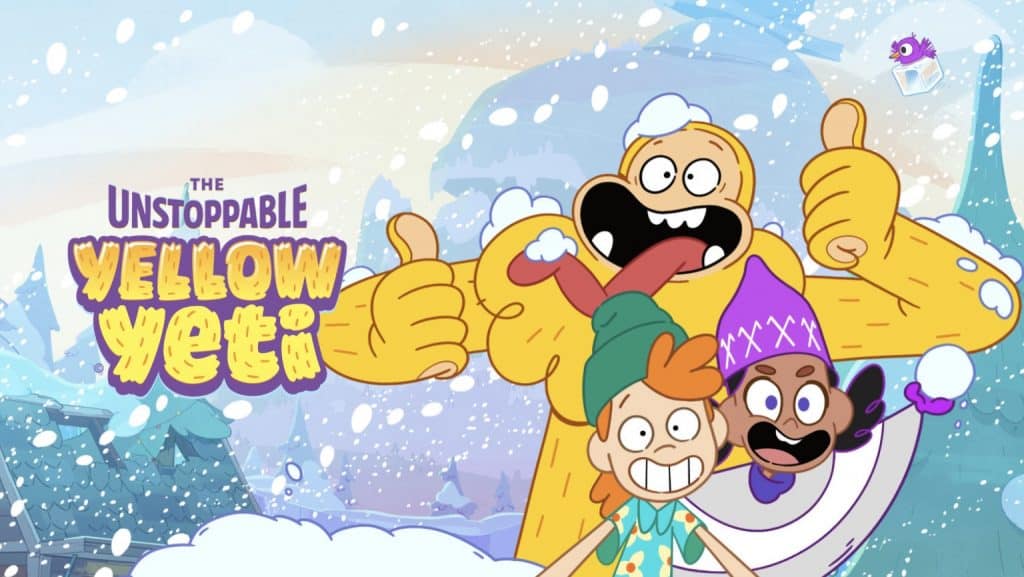 Disney EMEA and Finnish broadcaster YLE have announced they are working on a new animated series called “The Unstoppable Yellow Yeti”.

The idea for The Unstoppable Yellow Yeti is inspired by the experiences of director Joonas Utti, growing up in a rural small town in Finland. When Joonas was 12, his family hosted a Costa Rican exchange student. He did not fit the mould but coloured life with vibrance! The friendship opened Joonas’ eyes to experiences he only dreamed of & they remain best friends even today.

In the series, 12-year-old Osmo and his dad move from the beach to live with their distant cousins in the quirky town of Winterton, where it snows all-year-round, and monsters are strictly forbidden. While exploring his strange new home with his no-nonsense cousin Rita, the two of them form an unlikely friendship with a 6 ft tall yellow yeti called Gustav – who is an unstoppable giant goofball. Together, the fearless cousins help keep Gustav hidden from Osmo’s monster-loathing uncle, the bureaucratic Mayor Chrome, while exploring all the adventures their frozen home has to offer.

The animated show is targeted at 6-10 year old boys & girls. Created by Joonas Utti & Anttu Harlin at Gigglebug Entertainment, YY is co-developed with Zodiak Kids Studio France & Disney EMEA – the lead commissioning broadcaster – along Finland’s YLE and Nordic broadcasters DR, SVT, NRK. Gigglebug has also been working on 101 Dalmatian Street, which can be found on Disney+.

“The unstoppable Yellow Yeti is a top comedy IP we have been successfully developing with Gigglebug and Disney EMEA for a couple of years. We are so proud to greenlight the production and give birth to this series with such quality partners all over the world.”

“At Gigglebug we aim to positively impact the lives of children around the world by spreading joy through our work, and no character is more outrageously delightful than the Yellow Yeti himself! The coming together of Zodiak, Disney, YLE and our creative team at Gigglebug has been great fun and together we look forward to sharing with kids everywhere our exuberant fish-out-of-water comedy about the power of friendship and belonging.”

This show is due to arrive in 2021/2022, though no Disney+ release details have yet been confirmed.  It includes 50 x 11-minute episodes, along with 11 x two-minute shorts.

Roger has been a Disney fan since he was a kid and this interest has grown over the years. He has visited Disney Parks around the globe and has a vast collection of Disney movies and collectibles. He is the owner of What's On Disney Plus & DisKingdom. Email: Roger@WhatsOnDisneyPlus.com Twitter: Twitter.com/RogPalmerUK Facebook: Facebook.com/rogpalmeruk
View all posts
Tags: The Unstoppable Yellow Yeti