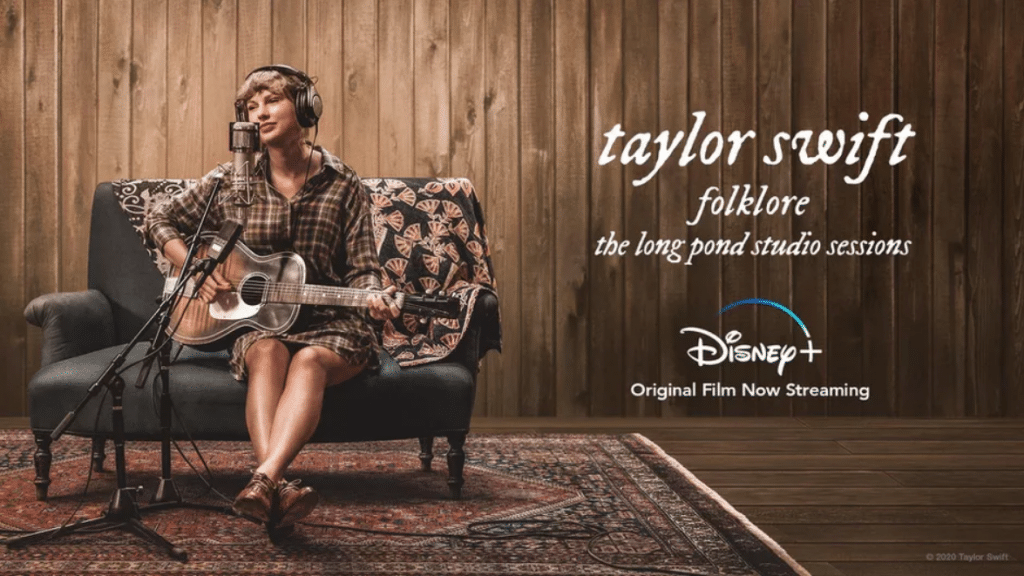 In a surprise release in time for Thanksgiving, this Disney+ special sees Taylor Swift along with co-producers Aaron Dessner and Jack Antonoff come together for the first time to perform the critically acclaimed number one smash-hit album, “Folklore”.

They created the album during the lockdown, and they made the album from their homes.   So months later, they came together and filmed this special in upstate New York.  To comply with Coronavirus restrictions, they kept the crew to a minimum by using 6 cameras embedded in the studio, along with one robotic camera on 30+ feet of curved track, plus some drone overhead shots of the property.   It makes the whole presentation much more grounded; it doesn’t distract from the experience of watching it, since it’s very beautifully shot.

They often talk about the effects the lockdown had on them, how they channelled their creative sides into this album and how it helped.  With so many of us having to stay at home more, to be away from people we love and doing the things we love, I found this special to fit 2020 perfectly.  It’s laid back, bare and simple, just three people together in a room making some fantastic music from the heart.   It’s just a very relaxing experience.

One aspect I liked about the discussions between Taylor, Aaron and Jack is that they are very open about the creation process, giving you much more insight into what the song is about and how they made it.  It sounds like your just listening in on a conversation, rather them talking to the viewer.   The revelation that her boyfriend, Joe Alwyn was one of the co-writers on the album under a pseudonym, William Bowery, was sweet.  The idea of just the two of them just writing some songs together in lockdown feels completely natural and not wanting for people to know this when the album was released is interesting.

I’ve listened to the “Folklore” album several times since it was released this past summer, which much like this Disney+ special, was dropped without much notice.   This is the first big Disney+ Original that has just been released without any publicity, and it just fits perfectly with the whole “Folklore” concept.   Usually, whenever Taylor Swift releases an album, it’s a huge promotional operation with an international press tour, followed by a huge global arena tour with millions of fans attending.  This time, none of that can happen, and they’ve completely embraced that they can’t do that, doing things completely different and delivering us a lovely special for Disney+.

Earlier this year, Disney added Taylor Swift’s “City Of Lover” performance that was filmed last year for the promotion of her “Lover” album and it was only on Disney+ for about a month, so I’m hoping “Folklore” will be staying around longer as this is such a great addition to Disney+.    I’m really hoping that Disney+ adds more music specials like “Folklore” and Beyonce’s “Black Is King” because they are a fantastic addition to the service and offers something unique.

Taylor Swift’s “Folklore – Long Pond Studio Sessions” is a heartwarming special that keeps things cosy as they sit around a log cabin singing and sat in the garden around a fire chatting.  It’s simple but so effective.  I really enjoyed this special and it’ll be something I watch over on multiple occasions because its something I can just put on while working, cooking or just chilling out.

Roger has been a Disney fan since he was a kid and this interest has grown over the years. He has visited Disney Parks around the globe and has a vast collection of Disney movies and collectibles. He is the owner of What's On Disney Plus & DisKingdom. Email: Roger@WhatsOnDisneyPlus.com Twitter: Twitter.com/RogPalmerUK Facebook: Facebook.com/rogpalmeruk
View all posts
Tags: review, taylor swift