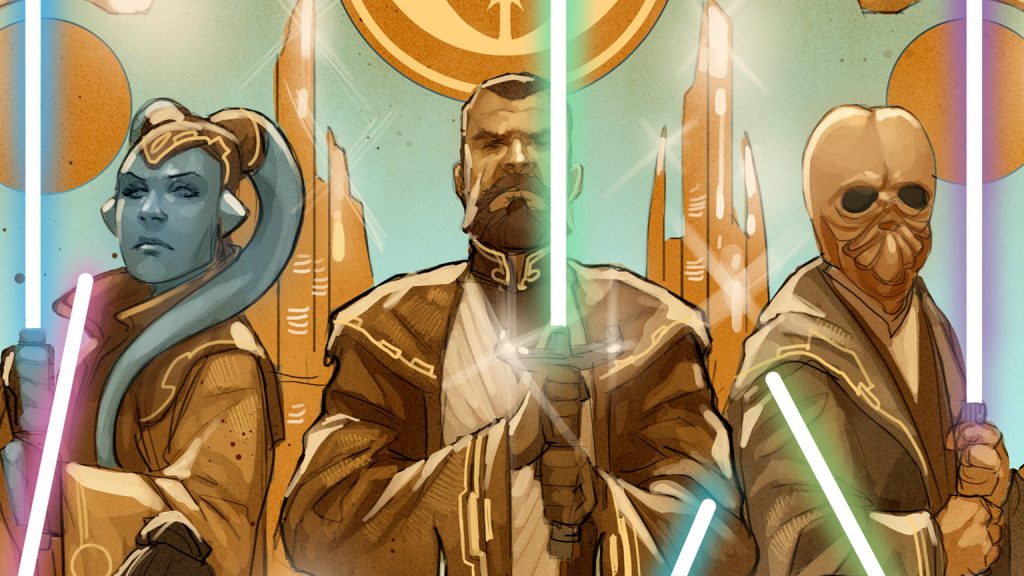 Now that Disney has finished off the “Skywalker Saga”, there has been much speculation about where Disney would be taking the franchise next, with many rumors of upcoming projects being set years before the “Skywalker” era.  And today, Lucasfilm announced a brand new publishing campaign called “Star Wars: The High Republic”, which will be set in an era when the Galactic Republic and the Jedi Order are at their zenith, about 200 years before the events of Star Wars: The Phantom Menace.

This campaign will include multiple projects including adult and young adult novels, children’s books, and comics from a variety of publishers including Disney Lucasfilm Press, Del Rey, IDW Publishing, and Marvel.

They’ve specifically said that this period on the Star Wars timeline will not overlap any of the filmed features or series currently planned for production, which will include Disney+ series.   It’s been done like this to give creators a vast amount of room to tell Star Wars stories with new adventures and original characters.  However, if these books become popular, I wouldn’t be surprised if these stories are eventually told on the screen via movies or Disney+ series, either animated or live action.

“Star Wars: The High Republic features the Jedi as we’ve always wanted to see them — as true guardians of peace and justice. This is a hopeful, optimistic time, when the Jedi and the Galactic Republic are at their height. But of course, into this glorious new era something wicked this way comes.  This initiative will give readers young and old a new corner of the galaxy to explore through rich, meaningful stories. Plus, readers will learn what scares the Jedi.”

“This was a golden age for the Jedi, and also a time of galactic expansion in the Outer Rim. So expect there to be rich tales of exploration; charting out the galaxy, meeting new cultures, and discovering what pioneer life in the Outer Rim was like. This is an incredible sandbox for our storytellers to play in, both within publishing and beyond, and we can’t wait to see the great fiction they build within it,”

The first books and comics are set to debut at Star Wars Celebration Anaheim in August 2020 with Star Wars: The High Republic: Light of the Jedi, a massive interconnected story that’s told across various formats by various publishers.

Currently Disney has multiple movies and series in development, including movies being released in 2022, 2024 and 2026, plus other unannounced titles.  So if Disney are spending this much time and money creating new characters, planets and stories for this new era, it would seem logical to use these assets for possible projects in the future.  This era is wide open for Disney to explore, while also allowing for some fan favorites such as a younger Yoda to appear.

What do you think of the idea of the “High Republic” period and do you think it will be something Disney brings to our screens in the future?

Roger has been a Disney fan since he was a kid and this interest has grown over the years. He has visited Disney Parks around the globe and has a vast collection of Disney movies and collectibles. He is the owner of What's On Disney Plus & DisKingdom. Email: Roger@WhatsOnDisneyPlus.com Twitter: Twitter.com/RogPalmerUK Facebook: Facebook.com/rogpalmeruk
View all posts
Tags: star wars, the high republic