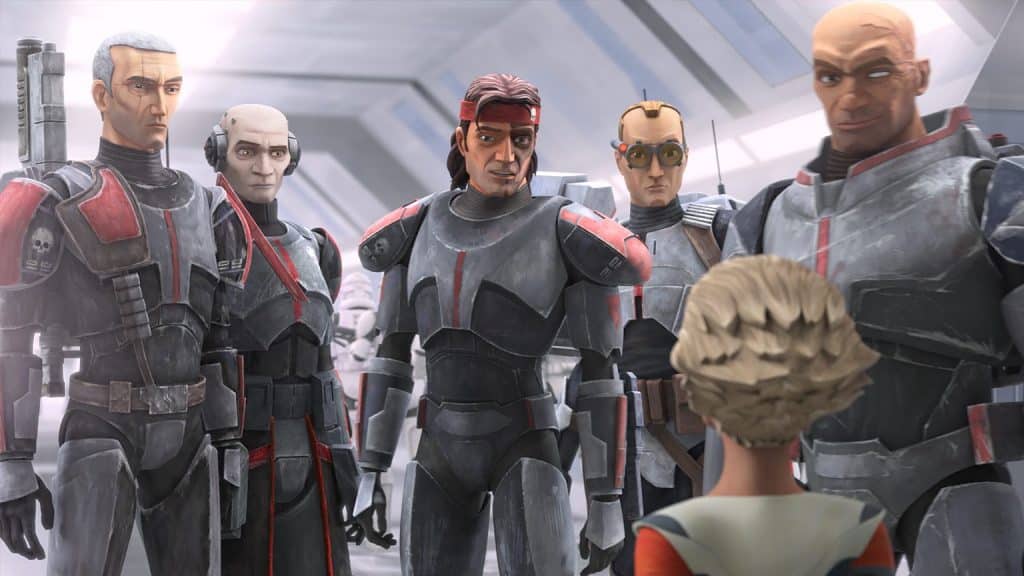 Star Wars: The Bad Batch is almost a sequel series to Star Wars: The Clone Wars, as it follows Clone Force 99, AKA The Bad Batch, after Order 66 occurs. This ragtag group of oddball clones must find their way in the changing galaxy as the Republic becomes the Empire. In this interview the voice of the clones himself, Dee Bradley Baker talks all about this group of misfits, their new addition Omega, and the fallout of Order 66.

The clones may look similar, but fans know they are all unique in their own way. So does the voice of these clones, Dee Bradley Baker, and when asked to describe each of them in a few words, this is what he has to say.

Hunter: “The leader of the pack. He’s got tracking skills, smell, and this heightened sense that helps him gauge the terrain.”

Tech: “[He] is very technically oriented – always has a handheld device that he’s working on. And is super cool, super calm, and competent with all things technical. ”

Wrecker: “To no surprise [Wrecker] is the muscles of the group. [He’s got] incredible strength.”

Echo: “A modified clone. An android clone from The Clone Wars episodes, who was brought on board with the Batch.”

Crosshair: “Crosshair is the sharpshooter of the group. Who’s kind of a contrary character and quite interesting in the dynamic.”

The big question is though, does he have a favorite? While Baker of course has a great affection for each and every one of the members of The Bad Batch, he admits that Wrecker is most fun to voice. Why? Because he is so different from his own personality. He is funny and honest, and great fun to voice.

That said, much of the story will focus on Crosshair though, and Baker describes him as the lynchpin member of the team. He is practical. He is the sniper of the group – standing further back from the rest o the group and taking enemies out one by one. “He is not someone who’s running around with the team, he’s assisting the team, in a very strategic and laser focused way. His nature is to be apart from the team he is a part of. That very definitely plays out as the larger political story plays out. Of this instantaneous mega transformation from Republic to Empire. Which is a very profound moment in the entire story of Star Wars.”

Omega and the Bad Batch’s Dynamic

Omega is the newest addition to The Bad Batch show – a young girl with a bit of sass and attitude. Just from the trailers, she seems like a pretty important character. Baker touches on her relationship with Clone Force 99, and specifically the dynamic between her and Hunter.

“It’s a fascinating relationship that unfolds. Because the team is their own sealed unit and they’re certainly not used to having anybody else along or working with anybody else. Although, they brought Echo on board after he proved himself to them. It i s interesting in terms of the story and the writing, to have this personal relationship with the younger character. And to see how that changes, and how they accommodate that, and how that works. It’s more of like an uncle/niece, or a father/child, dynamic, but not entirely. Omega has her own interesting potential of powers. Maybe. It’s interesting to see all of that unfold. I think it connects you to the story in a personal way. So it’s not just an action story. Star Wars never is. There’s a personal story that’s also playing out as well that connects you to the entire story.” 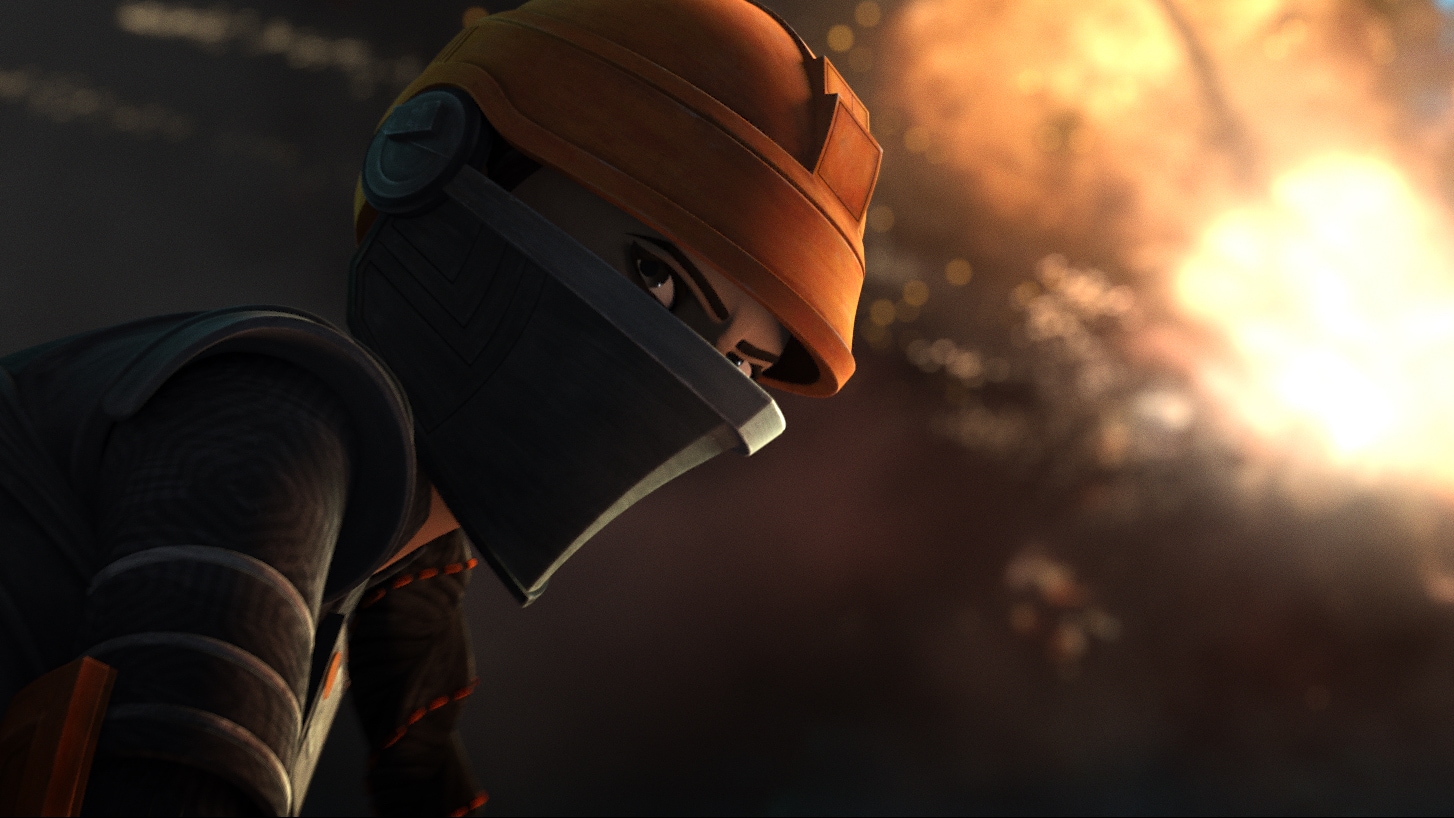 Star Wars: The Bad Batch dives into the aftermath of Order 66, and picks up right where The Clone Wars series ended. It is basically a sequel series, with Dave Filoni working closely with the creative team. Baker explains how the Bad Batch isn’t exactly known for following the rules, and that the transition from Republic to Empire might be quite a shock for them.

“[The] shocking transition from Republic to Empire – it becomes a suddenly much more rule-based power structure of the galaxy. Of the universe. And the Bad Batch are not so much a rule-based unit. They’re very much a team, but they’re not like the Clones are, where it’s more of a top down command structure. It’s very interesting to place them in the middle of this transformational moment and to see how that plays out.”

His Approach To Voicing All The Clones

Of course Baker is not just the voice of the members of The Bad Batch, he is the voice of all the clones throughout the Clone Wars series. He explains that this group was always a step beyond what he had done in the Clone Wars series. The tricky part for the clones characters in general is that there is a very small differentiation between them all. Something that has to be clear and decisive, but still very small.

With the Bad Batch all being very different in personality, it is easier for Baker to jump from character to character to character. “For me it feels like I’m jumping from rock to rock in a stream. I can see the rock. The writing is clear. And that’s what I jump to. That character.” Fun fact, when voicing a script he will actually read the lines in order, not one clone, and then another, and so on. What a sight that must be to see him in the booth going from Hunter, to Wrecker, to Crosshair while they are having a conversation!

“I feel like I know them, and it actually helps that they’re further differentiated vocally, and also in terms of their personality and their mood, shall we say? It comes off looking more as a magic trick then it does with the Clones, but it’s still a really fascinating process as a voice actor to have these scenes where I’m just talking to myself.”

About Star Wars: The Bad Batch

“Star Wars: The Bad Batch” follows the elite and experimental clones of the Bad Batch (first introduced in “The Clone Wars”) as they find their way in a rapidly changing galaxy in the immediate aftermath of the Clone War. Members of Bad Batch – a unique squad of clones who vary genetically from their brothers in the Clone Army – each possess a singular exceptional skill that makes them extraordinarily effective soldiers and a formidable crew.

“Star Wars: The Bad Batch” makes its debut on Disney+ Tuesday, May 4, with a special 70-minute premiere, followed by new episodes every Friday starting on May 7.

Tessa Smith AKA Mama's Geeky, is a journalist that covers geek and Disney culture on her own website, as well as freelances for other sites such as What's On Disney Plus and Screen Rant. She graduated Magna Cum Laude with a degree in Marketing and loves all things geeky. She is a Disney Vacation Club member and a Founders Circle Member of Disney+. She is also an approved critic for Rotten Tomatoes and a member of the Critics Choice Association. Tessa lives in Upstate New York with her husband, two daughters, and two dogs named Sansa and Khaleesi.
View all posts
Tags: bad batch, interview, star wars