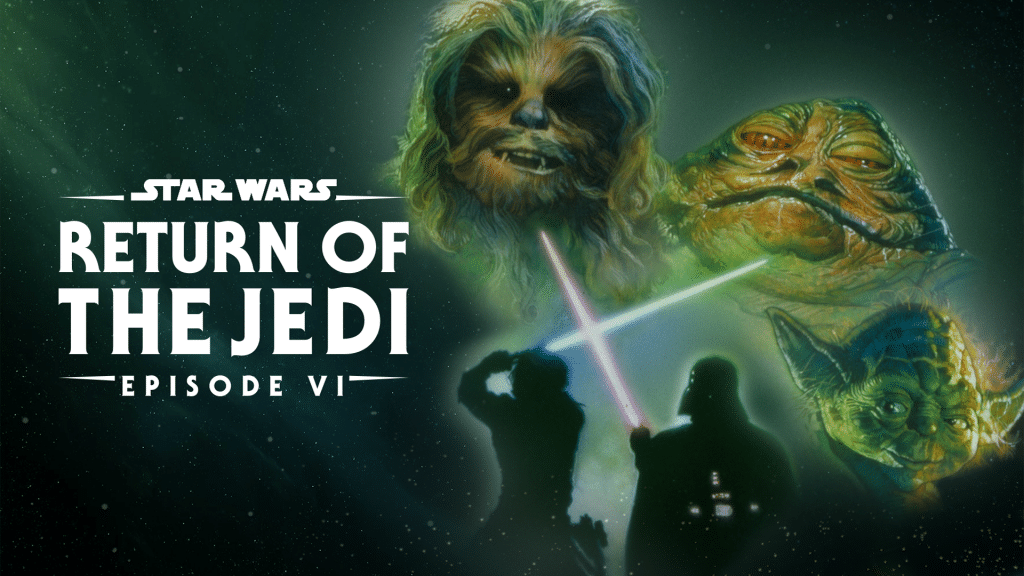 George Lucas wraps up the greatest trilogy in cinematic history with “Return of the Jedi.” It’s far from a perfect movie, but Lucas delivers a solid outing that puts a nice bow on the series.

For years, the original trilogy was the only set of movies Star Wars fans could see. Yes, there’s the long talked about Christmas special, but I don’t know anybody who had that on VHS, like people owned these. I used to watch the trilogy every month and I, absolutely, loved all three of them. The daring rescue attempt at Jabba’s palace, the Sarlaac pit, the speeder chase on Endor and the lightsaber fight on the second Death Star kept me enthralled for hours.

The growth of some of our favorite heroes is my favorite part. Luke has gone from naive farm boy to Jedi Knight. Han has gone from a hardened smuggler only out for himself to a caring, intelligent General. Lando, forced to make a deal with Darth Vader in “The Empire Strikes Back” is now saving Han and leading the attack on the Death Star. And, Anakin Skywalker, who once fell to the dark side to become Darth Vader completes his redemption arc.

The film has its flaws, of course, and one source of controversy is the Ewoks. Honestly, they are annoying and I don’t care for them. I know George Lucas intended to have them be Wookiees, and I think that would’ve better served the film. That being said, I’ll take a moon full of Ewoks over one Jar Jar Binks.

Also, the storyline developments backfire tremendously with the reveal that Leia is Luke’s sister. The most obvious is that it casts a completely new, and creepy, light on Luke’s attraction to Leia in “A New Hope” and Leia’s kiss in “The Empire Strikes Back.” A continuity error was also created in regards to Leia’s memory of her mother thanks to the prequels, but that was clearly not an issue back in 1983 when this film was originally released.

Again, the version of this film available on Disney+ is not the original, but the one released after the prequel trilogy. That creates a few problems in the scene where Luke notices the force ghosts at the end of the film. First off, Luke only saw Darth Vader with his helmet off once and he didn’t look like Hayden Christiansen. It seems to me, if Anakin were to appear as a force ghost, he’d look like he did when he died, not like he did at the height of his Jedi powers. Also, an issue is that while serving the dark side, Anakin wouldn’t have trained in the ways to become a force ghost, so he shouldn’t have been able to become one. It’s a moment that was cool in 1983, but George Lucas has changed so many times in re-releases that it’s lost its meaning. It’s now just confusing.

To me, it’s the weakest entry of the original series, but it’s still really good. If Lucas and Disney had stopped at three, it would’ve been fine.

What did you think about “Return of the Jedi?”

Jeremy has been a big Disney fan since he was a kid growing up during the Disney Renaissance. One day he hopes to go to every Disney Park in the world.
View all posts
Tags: retro review, Return of the Jedi, review, star wars