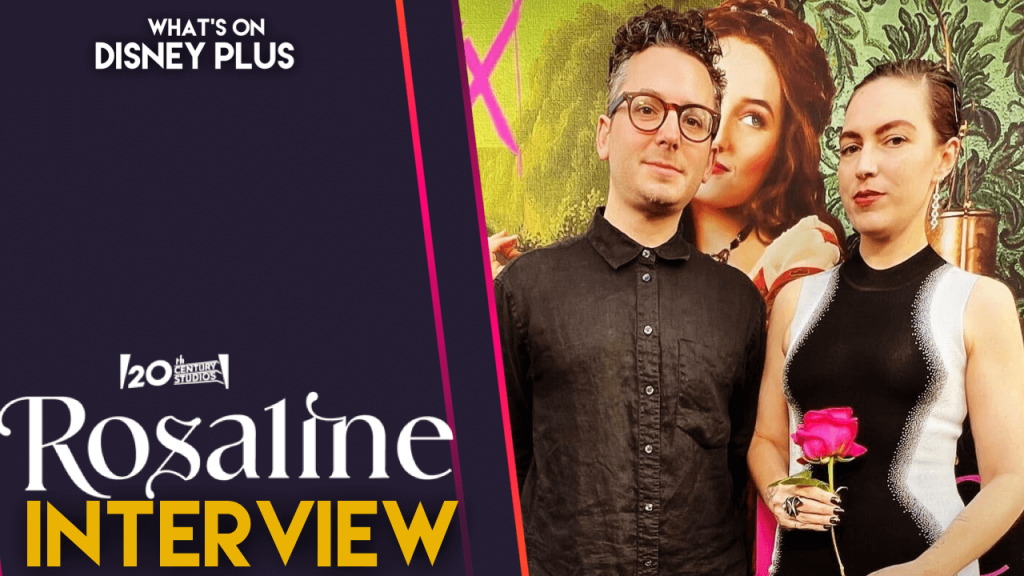 Disney’s 20th Century Studio’s latest film is “Rosaline”, which is a hilarious twist on “Romeo and Juliet” debuting Friday, October 14, exclusively as a Hulu original in the U.S., Star+ Original in Latin America and Disney+ in other territories.

“Rosaline” is a clever and comedic twist on Shakespeare’s classic love story “Romeo & Juliet,” told from the perspective of Juliet’s cousin Rosaline (Kaitlyn Dever), who also happens to be Romeo’s recent love interest. Heartbroken when Romeo (Kyle Allen) meets Juliet (Isabela Merced) and begins to pursue her, Rosaline schemes to foil the famous romance and win back her guy.

Recently, I got to speak with the composers of “Rosaline”, Drum & Lace (Sofia Hultquist) and Ian Hultquist, about creating the soundtrack to the film.

Having worked previously on Dickinson, Ian and Sofia’s musical palette translated easily to Rosaline. While Dickinson was a more lush, traditional score, Rosaline’s sound can be described as “Baroque-Pop,” using antique renaissance instruments such as harp, harpsichord, lute, Baroque flutes and wooden recorders, and a petzoldt. The pair found a way to mix orchestral and synth instruments while staying true to the quintessential story of Shakespeare.

The score is comedic, contemporary, and fun, using as many live instruments as possible. Sofia’s vocals can also be heard within the score. The film uses cover songs diegetically, having the actors perform them on screen with a unique early-2000s influence.

How did you get involved in composing films and series?

Drum & Lace: I mean, I don’t speak for Ian, but I think we both sort of fell into it. I’ve been a fan of music my whole life. I’ve been singing for as long as I can remember, and that evolved into playing some piano and picking up a guitar and playing in some bands, and being interested in music. And that led me to Berkeley College of Music when it came to picking a university. And I got in and went to Berkeley. And then, when I was there, I actually discovered the film scoring major, and I had never thought about it as a career. But I’d always loved film and film music, and there’s a big history of film and film music in Italy, where I’m from. So that’s sort of how I ended up at the composing and the scoring career and took a little detour and now have been living in LA for nearly nine years and just been going at it.

Ian: Yeah, the same for me. I was always into music, and I always left film, but never really thought about combining the two until I was a couple years in the Berkeley College of Music and realized that there was a film scoring major and that kind of set me on a new path. I didn’t necessarily jump into it right away. I was in a band called Passion Pit for quite a while, and I spent a lot of my time on tour. And then eventually kind of came back to scoring, started from the complete bottom and just really tried to work my way up.

How did he come up with the overall feel of the score for the film?

Drum & Lace: So I think Ian and I have a very specific sort of sound when we worked together. So we knew that was kind of the launching point and that we’d gotten hired because that’s what they liked. But then we got to work on camera music moments before jumping into the score since they needed us to come in while they were still shooting. So that really helped because we got to work on some Renaissance pop cover songs, and that kind of helped to set the tone because we had to pick live players from the time period that were going to be on set and on the screen. So we came up with this Renaissance ensemble to play the pop covers that are in the movie.

How did you come up with the idea of giving modern songs a Shakespearean twist?

Ian: It was just through discussions with Karen Maine, our director and Maggie Phillips music supervisor. We really wanted the score to feel exciting, and overall, we wanted the film to kind of have a little bit of nostalgia towards early 2000s romcoms like, “Can’t Hardly Wait,” “10 Things I Hate About You.” We were really trying to grab a little bit of that energy that existed back then and bring it back to this film. And our score was just like we knew there was going to be pop songs in it that were going to be kind of recreated through Renaissance instruments, and we kind of wanted our score to be able to live in the same world as those.

What was your biggest challenge working on “Rosaline”?

Drum & Lace: I think maybe the biggest challenge was finding the right tone for comedy. We always struggle with comedy cues, I think more so than drama. Just because with comedy you have to really make space for the dialogue and for the jokes to land and for the actor’s delivery to come through. So there’s a few scenes in Rosaline where there’s these very high comedy moments, especially between Rosaline and Juliet. And it was definitely challenging to find the right tone, to find the right instrumentation, to find the right rhythm so that then we could pause to allow a breath for Rosaline to say something, for example. So I think that’s maybe what was the hardest, just kind of coming up with the comedy parts of it.

What was the highlight of working on this film?

Ian: I think we had the fortune of working with all these incredible musicians at the recording sessions. We flew to New York and spent three days at Power Station and got to record string ensembles, percussionists, a whole renaissance ensemble, woodwind players. And we don’t always get that opportunity. A lot of what we do ends up staying in the synth world. So that for us was incredibly exciting.

Drum & Lace: Yeah. There was such a sense of camaraderie, and we really felt like we had a team. And you spend three days in the studio together with all these people, and by the end, you’re really sad because it’s this magical coming together. And then, as Ian said, we don’t get to do it very often with our music. So it was really, really fun.

How long did it roughly take to put the score together for the film?

Ian: I think we started writing actual score themes in December and went through about April.

Drum & Lace: Yeah. And then we recorded in May.

Ian: Yeah, we would be on and off. We would write a bit, have a week or two of downtime come back to it.  It was a nice schedule, actually. We were super lucky.

Are there any Disney-owned franchises or anything that you’d like to tackle at some point?

Ian: I would love to do something in the MCU, whether it’s a show or a film or what have you.

Drum & Lace: Yeah, I mean, I feel like same. I feel like that’s been one of Ian’s lifelong dreams. So I would be very, very satisfied even just seeing that happen for him.

And finally, what has been your favourite Disney Plus original so far?

Ian: I just watched Werewolf by Night over the weekend that Michael Giacchino directed and scored special and I thought that was really great. That was really fun.

“Rosaline” is coming out on Friday, October 14, exclusively as a Hulu original in the U.S., Star+ Original in Latin America and Disney+ in other territories.  The soundtrack will also be available on digital platforms.

Roger has been a Disney fan since he was a kid and this interest has grown over the years. He has visited Disney Parks around the globe and has a vast collection of Disney movies and collectibles. He is the owner of What's On Disney Plus & DisKingdom. Email: Roger@WhatsOnDisneyPlus.com Twitter: Twitter.com/RogPalmerUK Facebook: Facebook.com/rogpalmeruk
View all posts
Tags: interview, rosaline