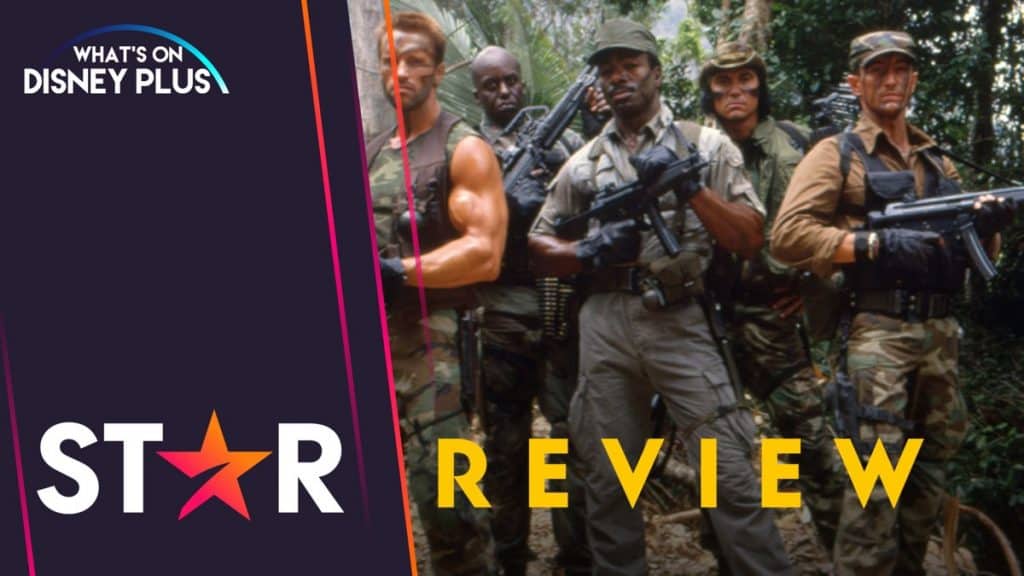 In this sci-fi action classic, a team of elite Commandos lead by Dutch (Arnold Schwarzenegger) are sent on what they believe to be a routine rescue mission in the Central American jungle. However, when things start to go wrong, they begin to realise that they’re being stalked by an extra terrestrial creature…

Predator is always a strange film for me to revisit. Whenever I go a few years without seeing it, my mind’s eye pictures it as a stereotypical 80s action extravaganza with a bit of a sci-fi twist. Especially with prime Arnie getting top billing. But then I watch it and I realise that it’s far more of an ensemble piece with a surprising amount of character-building moments. And what’s more, it’s not as action packed as those testosterone-fuelled, rose-tinted glasses may lead you to remember.

Make no mistake though, this film is still absolutely overloaded with machismo. Schwarzenegger’s Dutch is the archetypal example of this, especially thanks to the actor’s wooden performance that he was so infamous for during the zenith of his career when this was produced. Of course, the catchphrase-laden cheesy dialogue is incredibly charming and makes the film a joy to watch, but there’s no doubt that everyone looks like a chiselled G. I. Joe and is eager to demonstrate their own particular brand of über masculinity.

Besides Schwarzenegger, fellow Commandos Dillon (Carl Weathers) and Blain (Jesse Ventura) are also shining examples of this, although in more cartoony, less relatable ways. They’re both still highly entertaining, just a little more exaggerated in their personality traits. Still, even they are given the time to develop their characters (or at least what exists of them) whenever the plot slows down to let them converse.

And seeing as it’s really my job to be critical, that is perhaps my only major complaint with the film, its uneven pacing. Now, not all of this slowdown is unwarranted or without purpose. It’s nice on occasion to see these real life action figures show a bit of character, after all. But the slight problem here is that the first act is practically a self-contained short siege film that’s only tangentially linked to the rest of the plot. It’s actually great, getting to see this highly trained crew tear through a jungle outpost so efficiently. But when the rest of the film is so stop and start in an admittedly valid effort to increase the tension, it does leave the first 2 acts feeling rather lopsided.

Something that possibly doesn’t help with this slight imbalance is a surprising lack of the iconic Predator in the first half. As I’ve already mentioned, the first 30 minutes are practically standalone, with only a single glimpse of the “heat vision” that the creature is known for. It’s over 40 minutes until we get our first “hunt” kill and over 50 minutes until we get a true glimpse of the titular character. I’m sure that this was mainly to build anticipation for the final true reveal. But I always wonder if there was also a slight doubt towards showing it too much. Because truth be told, the Predator effects (at least when still wearing the helmet) have never been that convincing to me. The design is fantastic, of course, but it really does look like a man in a prosthetic costume.

But for all of my minor niggles and nitpicks, the film does a very strong overall job of building to a grand showdown between the universe’s greatest game hunter and Dutch. Thankfully, it delivers in spades. And for all the machismo that the plot parades around early on, the final battle has some decidedly cerebral elements to it that somewhat invert the parading to at least partial mockery in the sense that for all of the attempts to outgun this hunter, it ultimately took intelligence and ingenuity to get the job done.

The soundtrack is “80s action movie” to its very core but it works surprisingly well for both building up tension and pumping the adrenaline when the action kicks in. This is mainly achieved by an instantly recognisable pumping beat that can be repurposed to be both anxiety-inducing and exhilarating depending on what’s happening onscreen.

In summary, this is a classic that still holds up well today but does stall slightly when it decides to slam the brakes on its pacing repeatedly. Then again, the vast majority of this stuttering is done in the name of character development, which is always a noble endeavour for an action film at the peak of the craze for the genre. If you’re a Schwarzenegger fan, you don’t need my recommendation as you’ve already watched this ten times over. But if you’re someone who’s lukewarm to this genre then this may be one of those timeless creations that manages to shift your perspective a little.

Predator is available on Disney+ in a maximum resolution of 2160p (4K) Ultra HD and with the full suite of Dolby Vision and Dolby Atmos features on compatibility devices. This is in line with the physical releases worldwide.

Predator does include an “Extras” tab on its page, although it currently only houses the standard brief “promo clip”.

“Predator” is available to stream on Disney+ now in many countries including the UK and Ireland, Canada, Australia and New Zealand, the Netherlands, Spain and more.

What are your thoughts on “Predator”?

Jon has been a Disney fan all of his life. From wearing out those expensive VHS tapes and visiting Disneyland Paris as a child to becoming a huge fan of the MCU in adulthood, Disney has helped shape some of the happiest, most fun moments he can remember.
View all posts
Tags: predator, retro reviews, star