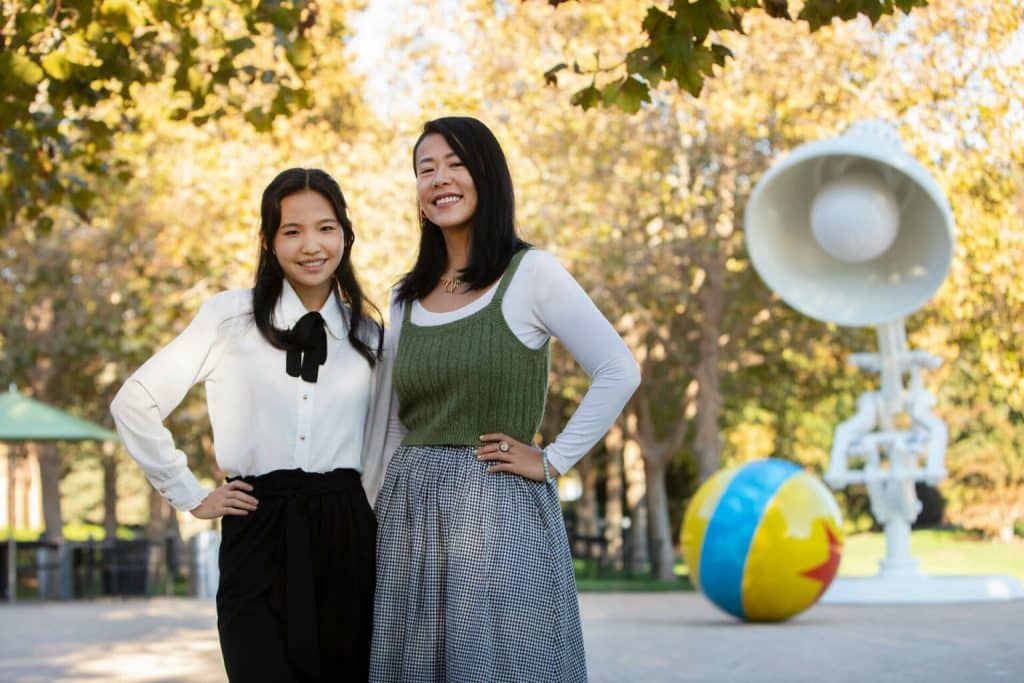 Pixar’s Turning Red is coming exclusively to Disney+ on March 11th and in celebration of the film, Pixar held an early press day where the creators behind it discussed their inspiration and techniques. There are many firsts for Pixar associated with Turning Red, including the first female-led team, isolated motion, and even a character breaking the fourth wall.

Turning Red is a unique take on adolescence and puberty. It takes the changes a teenage girl’s body goes through and makes it quite literal by transforming Mei into a red panda at the most inopportune time. Because of these changes, Mei is much more emotional, and has a hard time composing and controlling herself. This is something everyone goes through in their life, making this movie extremely relatable.

Director Domee Shi explains what an honor it is for her to be making history like this. She says that Turning Red is made for the tween her to show girls, and kids, around the world that women, and women of color, can lead big feature film productions and be successful. Even though this movie was pushed from a theatrical release to a Disney+ release, there is still a lot to be proud of.

This movie is the very first Pixar film that has a character breaking the fourth wall, something Mei does quite often. Having seen the first thirty minutes of the film, we can totally see what Domee Shi means when she says she took inspiration from shows she watched growing up, like Lizzy McGuire. “I wanted to take that energy and put that in this movie,” Shi explains. Well, she succeeded.

The creative team also confessed that there is something in Turning Red that is very unique to Domee Shi. This is something she requested of the team, and something none of the animators had ever been asked to do before. That is isolated motion. This is when only one part of the character moves, and everything else stands still. It took a lot of practice for the team to get used to this style, and for many scenes they had to do multiple versions to truly nail it. Isolated motion can be seen in the Turning Red trailer, when red panda Mei pushes the girl back into the bathroom stall after she discovers her standing there.

Clearly red pandas have a huge part of this film. In order to get things right, the creative team did a lot of research and toured zoos in order to study red pandas. One thing they discovered, that Supervising Animator Aaron Hartline discovered during this time is that red pandas throw their hands up in the air when they are startled. Go ahead and search YouTube for adorable videos of this, we will wait.

Anyways, this was something so unique and fun that Hartline knew he needed to include it in the film. So whenever you see Mei getting startled, she will throw her hands up in the air, just like a red panda does. “It’s so cute and weird and odd, and we had to use this.” Hartline explains.

But why red pandas? Was any other animal ever on the table? Nope. Director Domee Shi explains that there was never any other option for Turning Red. She wanted to bring them into the spotlight because they seem to be the less popular panda. Something she loves about them is that they stay cute for their entire lives. Plus, they are native to an area of China where her family is from, the Sichuan province, so it is a homage to her background as well. 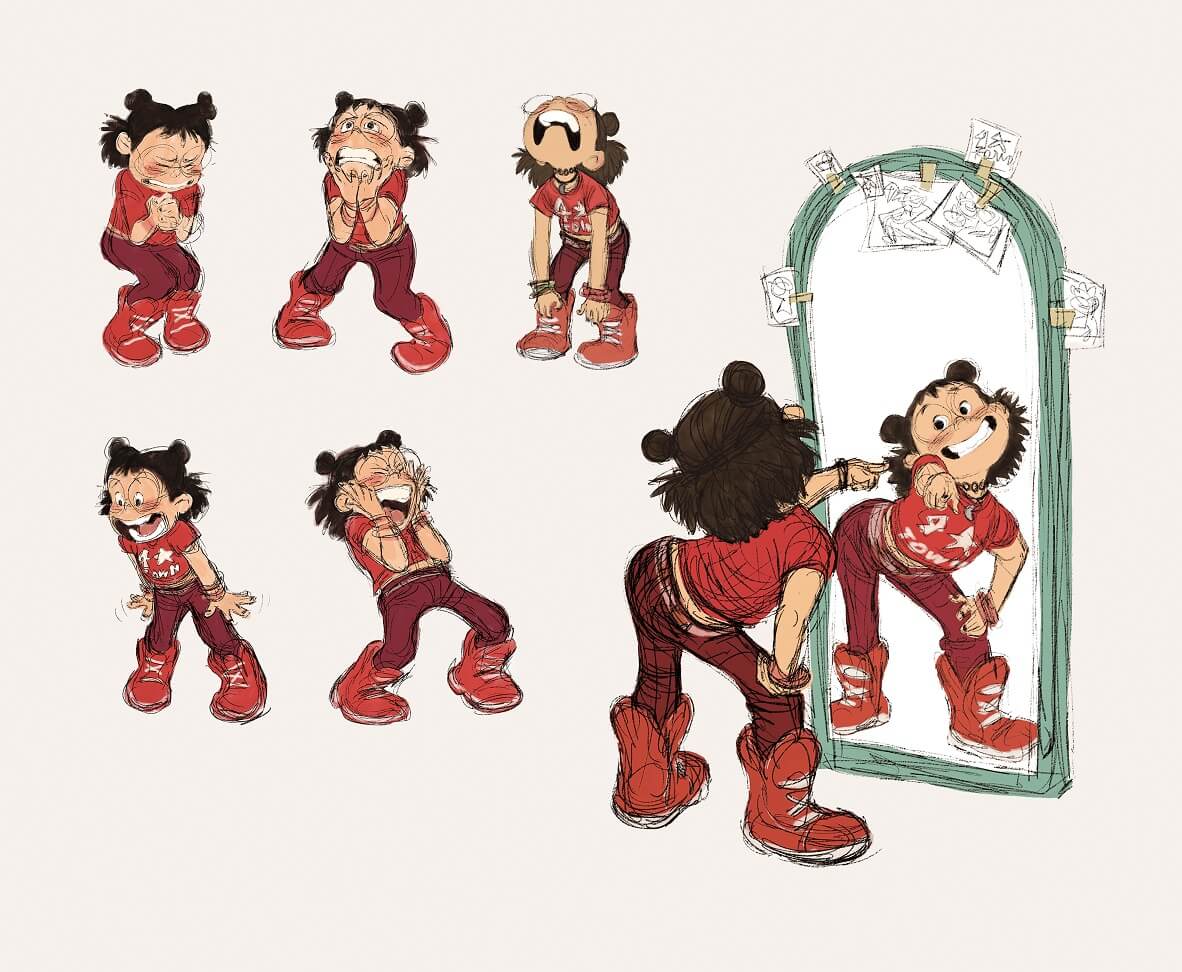 Turning Red is very much inspired by anime, something that Domee Shi loves. In order to pull this off, they needed to incorporate all sorts of elements to make something new. The anime inspiration is clear from the start, but it doesn’t overshadow the movie or the Pixar feel of it. This is something Domee was determined to pull off with her team.

The biggest inspiration taken from anime television shows and movies is the expressive eyes of the characters. If you have ever seen an anime style character than you know they give off their feelings with their eyes. For example, stars when they are excited, big tears when they are upset, and tiny pupils when they are in shock. Mei is a hormonal teenager (her transformation into a red panda is a nod to puberty after all), so her emotions are all over the place. These techniques are used in order to help the audience understand exactly what she is feeling in each moment.

Something else that was taken from anime, and is not common at all in 3D animation, is the side profile shots with just one eye showing. This is, once again, the first time this technique is used in a Pixar film. 2D hand drawn cartoons were used as inspiration to help animators perfect using this style. During the press day we were shown versions of scenes with both eyes showing, and then with just one eyes showing. The difference is noticeable, and it is clear the side profile works best with this story.

There is a lot of real life inspiration weaved into Turning Red as well. Domee Shi took a lot of moments that she had with her own mother and incorporated them in to the story. She explains that so many of the interactions between the two are cringey because they came from her actual life. She even admits that she had a secret journal that she hid under her bed, just like Mei, and she is unsure if her parents ever discovered it.

When it comes to Mei’s friends, her ride or dies, a lot of them are based on people from her life as well. One of them even voices the character that is inspired by her — how cool is that?

“I put one of my friends in the movie. Abby Park in the movie, she’s a short fused friend of Mei’s who was definitely, loosely, inspired by my real life friend, colleague, and fellow Pixarian, Heyin Park, who also does the voice of Abby. We’ve been friends since college and she’s always been that ride or die friend who gets angry for you when things become unfair.” Shi continues, “I thought it was a really cool character to put in the movie because she’s so specific, but also unique, and I haven’t seen a character like her in a movie before.”

Turning Red comes exclusively to Disney+ on March 11, 2022 and after having seen the first thirty minutes, we can guarantee it will be a massive hit!

Tessa Smith AKA Mama's Geeky, is a journalist that covers geek and Disney culture on her own website, as well as freelances for other sites such as What's On Disney Plus and Screen Rant. She graduated Magna Cum Laude with a degree in Marketing and loves all things geeky. She is a Disney Vacation Club member and a Founders Circle Member of Disney+. She is also an approved critic for Rotten Tomatoes and a member of the Critics Choice Association. Tessa lives in Upstate New York with her husband, two daughters, and two dogs named Sansa and Khaleesi.
View all posts
Tags: pixar, turning red