Pixar’s Lightyear takes one of the most popular animated characters of all time, Buzz Lightyear, right out of his franchise Toy Story, and puts him in a whole new surrounding. The Toy Story films, as fans know, star the toy version of Buzz Lightyear. This new film, however, is the billed as Andy’s favorite movie. This is the one that he fell in love with, and that made him want a Buzz Lightyear toy.

During the press conference with the cast and filmmakers there were lots of laughs as they discuss the details of how Lightyear fits into the Toy Story universe, voicing new versions of iconic characters, creating the music for the film, and so much more.

Chris Evans On Voicing A New Version Of Buzz Lightyear

Tim Allen has been Buzz Lightyear for years, decades even. So to bring Chris Evans into this role, for him that must have been a bit nerve-wracking. The saving grace here is that this is a different version of Buzz, and not the one that fans already know and love. That Buzz was the toy, this is the man. When asked about bringing this version of the character to audiences, Evans says that he was excited to get to explore a character that we all know, in a slightly more nuanced interpretation.

“The Buzz that we all know is obviously a toy. And as a toy, there are certain ways that they can move through the world without the weight that we may carry. A toy knows its purpose. A toy doesn’t have to worry about disease. The downstream impacts of the choices that we make as people are a little bit more consequential, and it’s fun to put Buzz against that backdrop.

Evans was also asked about two iconic lines he has now spoken – “To Infinity and Beyond” and “Avengers Assemble.” He says it is impossible to choose a favorite, but in his mind the first one it Tim Allen’s line. Not his. “As honored as I am to to be a part of this universe now, that line belongs to someone else. It almost felt like I was wearing someone else’s clothes or something. So you do your best to honor it, and put your own spin on it, but let’s be honest, that’s Tim Allen’s line. So personally, at least with ‘Avengers Assemble’, I was the first one in the pool for that one.”

When Keke Palmer is asked about how she connects with her character, Izzy Hawthorn, she didn’t even have to think about it. “Her love for her grandmother, Alicia, and the legacy that she wants to uphold. She wants to make her family proud. And that’s something that I think we all can relate to. And the fact that she’s not afraid to pivot, I really admire that about her. I feel like she displays so many great leadership qualities that sometimes we overshadow. She knows how to push her friends forward. She knows how to see something in somebody so they can carry out their duty, she empowers others.” When you see Izzy on screen, you will know exactly what Keke is talking about, because that is Izzy to a T.

Taika Waititi lends his voice to the character of Mo in Lightyear, but he is no stranger to filmmaking himself. His newest film, Thor: Love and Thunder, is set to release less than one month after Lightyear. When asked if he took any notes on how Pixar makes that film, that he will bring into his own filmmaking journey, he had nothing but praise for them.

“Especially with Pixar, it’s the relentless pursuit of a perfect story. You can see that time and time again with their movies. I always go back to their movies, not only just for entertainment or to feel something emotional, but I go back to study how they structure their films and the economy of storytelling and the way that they write their scripts. Annoyingly, they get it right every time, so I’m not afraid to rip off those practices that they use. It’s inspiring to see as a filmmaker – to see these guys make these perfect films all the time.”

Dale Soules On Darby’s Past

Dale Soules’ character Darby has a mysterious past that viewers never find out about. There are glimpses, but not much. When asked if she created her own backstory for Darby, or what she was told about it from the filmmakers, Dale points out that they wanted to keep her past mysterious. “We do know that she was incarcerated. Everyone else is voluntary in the junior zap patrol, but she isn’t exactly voluntary. She’s there in the hope that she will reduce her a parole if she does well. And so that’s the part. In a lot of ways, I suppose she is like me. She’s no nonsense, she’s gruff. And very loyal to those who do treat her with respect.”

Later during the interview, she jokes that she wants a Darby and Sox spin-off show, and we think fans everywhere will second that. They would certainly be an interesting duo, and she promises, she would never blow him up.

Sox is Buzz Lightyear’s robotic animal companion and trust us when we say he is going to steal everyone’s hearts. He is voiced by the talented Peter Sohn, who finds a great balance between robot and lovable to Sox the cat. When asked how he came up with that, he gives all the praise to Director Angus MacLane.

“That was all Angus, and the team. They’re really fun to work with, and I’ve known Angus for a long time. We nerd out a lot on Wrath of Khan and our favorite Sci-Fi movies. It was really easy to go from a militant ‘Yes, Captain. Warp one lightspeed.’ and then go into a friendly buddy. It’s so funny, when we were talking about Sox, he’s a cat, but he’s so loyal like a dog, and I’m a dog guy. So I can totally jump into the idea of whatever you want. I’ll bring you your snacks. I’ll bring your newspapers. It was really in the room, but that was made with Angus the most.”

When asked about bringing something new to an iconic character like Zurg, James Brolin admits that what helped him was knowing very little about the story for Lightyear.

“I walked in there cold. The night before I got a sheet with some of the dialogue. None of it quite made sense. It was one of five sessions. I thought I’ll knock this out in a half hour — four hours later of sweat with each session with Angus saying ‘try it like this’. Each day I learned more, of course, out of common sense, about what the character was about, but I had to piece it together. I haven’t seen a polished film yet. And I’ll see it tomorrow night to see what my character was all about. I have no idea.”

Including The Same-Sex Kiss

At one point in time, Pixar removed the lesbian kiss from Lightyear. But after a bit of backlash, it is back and here to stay. This makes the filmmakers very happy. Producer Galyn Susman explains “It was very important. That whole relationship is about showing Buzz what he doesn’t have. And we really just wanted to show a loving, meaningful relationship. And having a kiss as part of that. We were really, really happy that we could do that.”

Director Angus MacLane adds, “And certainly representation was something we were excited about. But more than anything, it’s a reflection of the reality of the world that we live in. And we feel like science fiction was always my entrée into a more diverse society. Starting with Star Trek, at the time, was very diverse for a movie for a show of its era. And so it’s in that spirit that we take from Star Trek of trying to find the most diversity we can in our cast.”

Is Lightyear Live-Action Or Animated In Andy’s World?

Lightyear might be an animated feature from Pixar, but there has been much debate online as to whether Lightyear is an animated or live action film in the Toy Story universe. During the Lightyear press conference Director Angus MacLane and Producer Galyn Susman confirmed that Lightyear is, in fact, a live action movie that Andy watched, and not an animated film.

This is part of the reason they went with such a hyper-realistic animation style. The Buzz Lightyear in this film looks much more realistic, and has natural human proportions, compared to the one in Toy Story. These are all indications that Lightyear is considered to be live action, in Andy’s world. 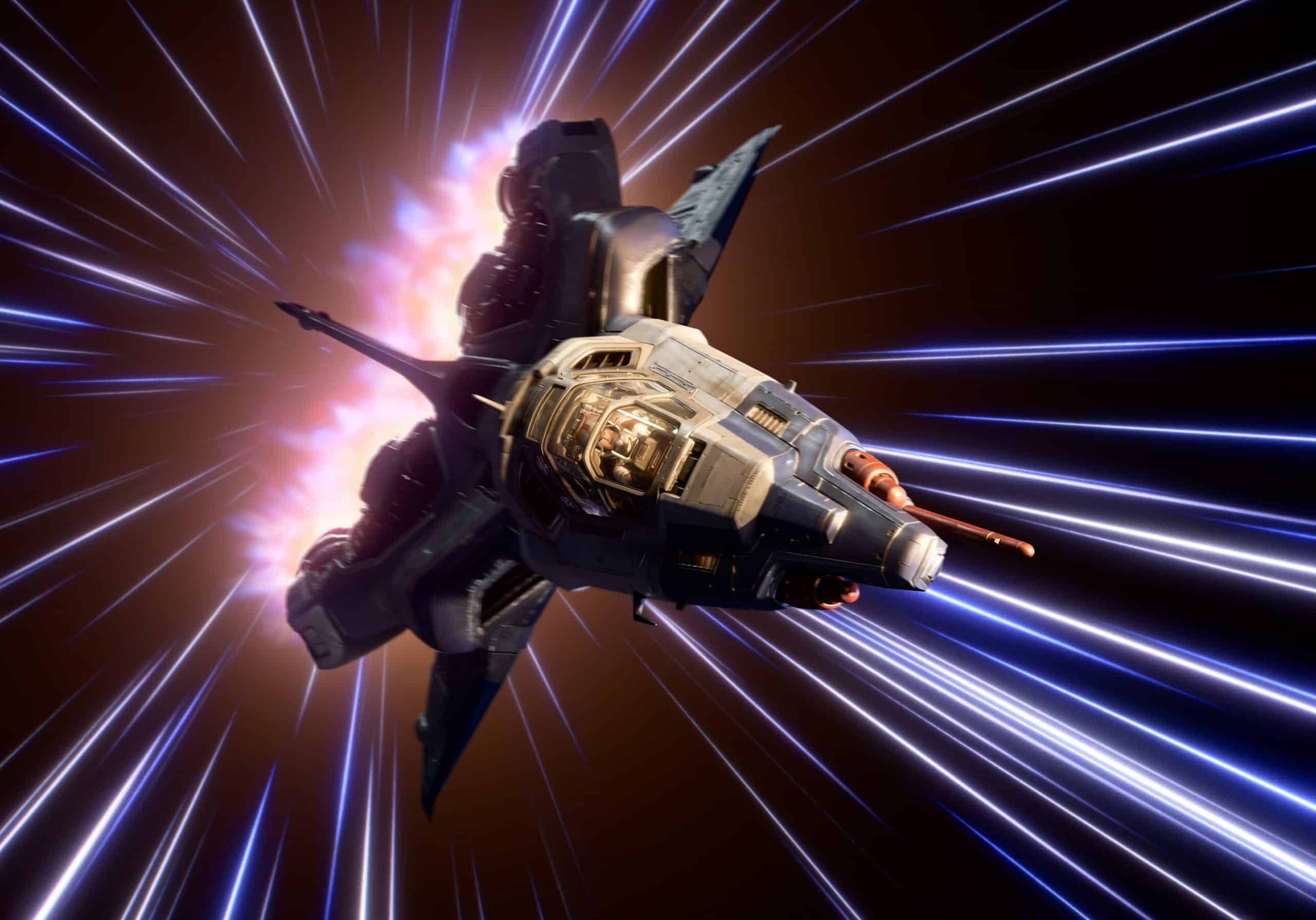 Composing the Music For Lightyear

Lightyear needed to have an iconic score because this is his favorite movie. This is essentially Andy’s Star Wars. Composer Michael Giacchino does fantastic work, and is a great choice to come up with the score for Lightyear. When asked about what elements went into it, he explains that these are the types of movies he grew up on.

“I was pretty much was raised on [movies like this]. I ate them up as a kid. I used to sneak a small tape recorder into the movie theaters when I was a kid. And I would record the movie audio, and it would have the audience response, all of that on it. And I would listen to it. There was no VHS when I was growing up. There was nothing. There was no Internet. The only way for me to experience that movie again, when it was out of theaters, was to listen to it. So I would record them. And then I would sit at home. And every night, I would play them under my pillow. Because I loved to listen how the sound worked in these movies, and how music worked with sound effects and dialogue and all of that. So it’s like, ingrained in my head in a massive way. So working on this was like if someone had asked me, at 12 years old, hey, you get to make your own one of these things. What do you want to do with it? That’s what I love about working with Angus, we always are sidelined into some crazy conversation about whether it’d be a movie from a certain era, or a character actor from a certain era, or whatever it is. We have such love for what came before and what introduced us to everything that we’re now playing with today. It was not hard to find the inspiration for this.”

Lightyear hits theaters on June 17th and prepare to be swept away, and see a whole new side of Buzz Lightyear.

Tessa Smith AKA Mama's Geeky, is a journalist that covers geek and Disney culture on her own website, as well as freelances for other sites such as What's On Disney Plus and Screen Rant. She graduated Magna Cum Laude with a degree in Marketing and loves all things geeky. She is a Disney Vacation Club member and a Founders Circle Member of Disney+. She is also an approved critic for Rotten Tomatoes and a member of the Critics Choice Association. Tessa lives in Upstate New York with her husband, two daughters, and two dogs named Sansa and Khaleesi.
View all posts
Tags: lightyear, pixar