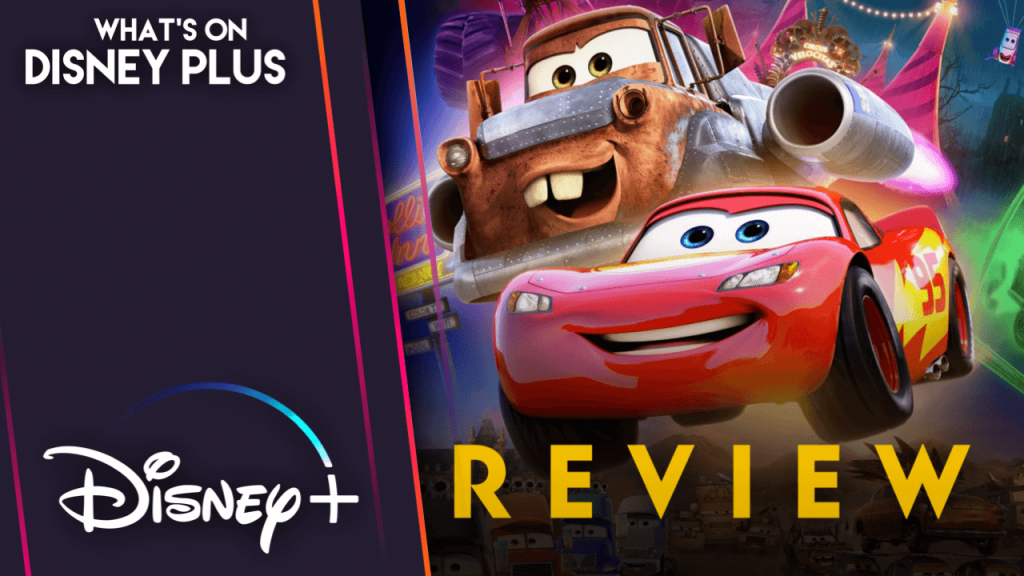 One of Pixar’s biggest franchises returns this Disney+ Day with a collection of nine brand new shorts featuring Lightning McQueen and his best friend Mater, who head east from Radiator Springs on a cross-country road trip to meet up with Mater’s sister.

Each short is about eight minutes long, but that includes an intro and credits. So altogether, there is around an hour of new adventures featuring the “Cars” characters.  The short format allows the creators much more freedom to tell different stories, that just wouldn’t be possible in a film.   The format works exceptionally well and could quickly become a staple of Disney+.  I actually think it’s a great way for Disney to continue the franchise, giving younger audiences something to enjoy, more often.

The Road Trip format allows the series to spread its wings a little, as each stop along the way has a different little adventure.  There’s an episode where they visit an outrageous roadside attraction like a Dinosaur Park, resulting in a story about Dinosaur versions of cars.   They also stop by a haunted hotel and have a run-in with some ghosts.  Other topics covered in this short series include Meter becoming a land speed racer, visiting a circus and even joining a group of campers who are trying to track down Big Foot.

One of the things I really like about this series, is that the quality hasn’t been skipped just because it’s a collection of shorts on Disney+.   Graphically, this looks just as good as any of the films.   Most of the shorts are generally just a singular story, that you can just jump into, but there are a couple of episodes that are connected.

If you’re a fan of the “Cars” franchise, you really can’t go too wrong with this collection of shorts.  They are all easy to watch, and I’m sure younger viewers will be watching these shorts on repeat. And I think that’s the most important thing to remember, adults can enjoy these shorts , but it does feel like it’s more suited to kids, and the short format means the pace of the storytelling is much faster, because the stories are much more focused on one specific topic.

Overall, “Cars On The Road” is a fun-filled collection of shorts that captures the spirit of “Cars” and delivers a delightful series of shorts, that’s full of the charm of the films.   If you love “Cars”, you’ll enjoy this series of shorts. I know I did.

All episodes of “Cars on the Road” begin streaming on Disney+ Day, September 8th 2022, only on Disney+.

Roger has been a Disney fan since he was a kid and this interest has grown over the years. He has visited Disney Parks around the globe and has a vast collection of Disney movies and collectibles. He is the owner of What's On Disney Plus & DisKingdom. Email: Roger@WhatsOnDisneyPlus.com Twitter: Twitter.com/RogPalmerUK Facebook: Facebook.com/rogpalmeruk
View all posts
Tags: cars on the road, review