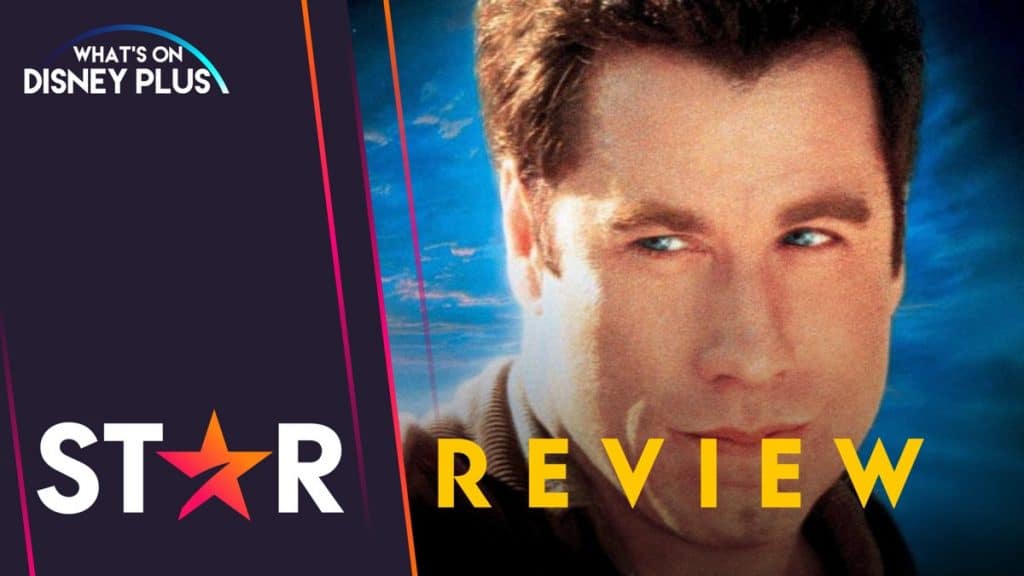 In this sentimental, sci-fi-fantasy drama George Malley (John Travolta) is an unremarkable, everyman mechanic who lives in a sleepy little town and is liked by all. On his 37th birthday, he is knocked of his feet by a blinding light which proceeds to give him genius level intellect and strange telekinetic powers. While George tries to make the most of his new gifts, his friends increasingly become terrified by them…

I’ve always had a vague memory of Phenomenon since I watched it on TV at some point in the late 90s. Because it managed to make enough of an impression to stick around in the old memory banks for over 20 years, I assumed that it must have been of good quality. Indeed, I was quite genuinely enthused to press play when it was recently made available for streaming in the UK. As it turns out, it’s… fine. It’s main flaw is trusting John Travolta to put forward a strong acting performance.

Okay, that was a little harsh. Travolta isn’t terrible here. He does exhibit some range. He’s sad when he should be, happy, frustrated, angry etc. I think the real problem is that he has very little to work with and isn’t a strong enough performer to draw more out of what’s written on the page. Allow me to elaborate by spotlighting the character he portrays.

George Malley is a nice guy. That is quite literally his only personality trait. With or without his extraordinary new abilities, he’s helpful to all, considerate of others and immediately apologetic for even the slightest offence caused to those around him. Ironically, the only times he comes across as imperfect is during his early stalker-like behaviour towards his love interest, Lace (Kyra Sedgwick) but considering the film positions this as normal, I don’t think this was intended as a flaw. It’s obvious that Malley is created as an immaculate protagonist purely as a way to carry the film’s rather bland and sappy message of acceptance because if he wasn’t such a stand up guy, the townspeople would seem more justified when they begin to be concerned. I get why it was done, but it stretches credulity. In a film depicting telekinesis, no less.

I mentioned Lace earlier and unfortunately she isn’t much stronger as a character either. We get the briefest of references to her past but nothing particularly substantial. She only ever states that she doesn’t want to be in a relationship to “keep things simple” but there is no outright explanation of why. The closest we get is a mention of her children’s father “going away” with vague allusions to fear of abandonment. Yes, I suppose these snippets of dialogue can technically class as backstory but it’s a threadbare as possible if so. This gives the impression that her only purpose in the story is to fall in love with George. She doesn’t grow as a person in her own right. She changes because she meets him. And of course, this potential love affair is drawn out for as long as possible with numerous stops and starts to their affection. It’s all very textbook and cliché.

I want to briefly pause in not being particularly flattering towards the acting and characterisation to acknowledge the solid contributions of Al (David Gallagher) and Glory, (Ashley Buccille) Lace’s children. They’re both very likeable yet realistically childlike in their behaviour. I’m not about to say they’re both a gold standard for child acting but they do deliver some emotional weight in key scenes (sometimes outperforming Travolta) and manage to avoid being wooden. That deserves some credit.

I wish I could say the same about the rest of the supporting cast but I’m not sure I can. Well, in truth, Nate (Forest Whitaker) is more of a strange addition to the narrative than anything else. Serving the role of George’s unconditional best friend, the strange quirks they give him unintentionally suggest mental illness. He is obsessed with Diana Ross to the point that he “talks to her” through the two-way radio set he owns, lets his house get messy to the point of possible hoarding and proceeds to immediately fall in love with the housekeeper that George sets up a meeting with. Yes, I know that this is common in films when a B plot needs to get rushed along. But the awkward pairing of this instant romance with Nate’s other odd quirks leaves the character feeling awkward to modern eyes.

Back on a more positive note for a moment, I will admit that I was quite happy with the depiction of “Doc” (Robert Duvall) who is the town Doctor and quickly established as a father figure for George. His motives and behaviour are always consistent and he behaves in perfectly believable ways to the strange goings on without descending into pantomime hysteria and mistrust like the rest of the townspeople. The credit should absolutely go to Duvall, who shows plenty of nuance as he battles with conflicting emotions. Yes, it’s perhaps a little spoiled by a rather “holier than thou” speech towards the end but even that is well delivered and actors can mostly only work with what’s on the page.

The music is about as average as the rest of the production. There are a couple of decent love ballads and an instrumental motif that’s used multiple times throughout that’s perfectly fine, even when it is tied to the most blatantly sentimental, heartstring-pulling moments of the film. I doubt that most people would remember this soundtrack over 20 years later. I barely do even after this most recent rewatch.

And in summary, I think the best way to label this film would be as distinctly average. It looks nice at times and the message that the film is trying to tell is well meaning but it’s all so cookie cutter (even for the mid-90s) that very little of it is actually as impactful as it’s numerous attempts at passionate speeches seem to believe it is. And that’s fine. It’s still totally inoffensive anyway.

Phenomenon is available on Disney+ in a maximum resolution of 1080p HD and standard 5.1 surround sound on compatibility devices. This is in line with the Blu Ray releases worldwide.

Once again, Phenomenom does not include an “Extras” tab on its page. Therefore, not even a standard trailer or “promo clip” is available.

“Phenomenon” is available to stream on Disney+ now in many countries including the UK and Ireland, Canada, Australia and New Zealand, Spain and more.

What are your thoughts on “Phenomenon”?

Jon has been a Disney fan all of his life. From wearing out those expensive VHS tapes and visiting Disneyland Paris as a child to becoming a huge fan of the MCU in adulthood, Disney has helped shape some of the happiest, most fun moments he can remember.
View all posts
Tags: phenomenon, retro reviews, star, touchstone pictures