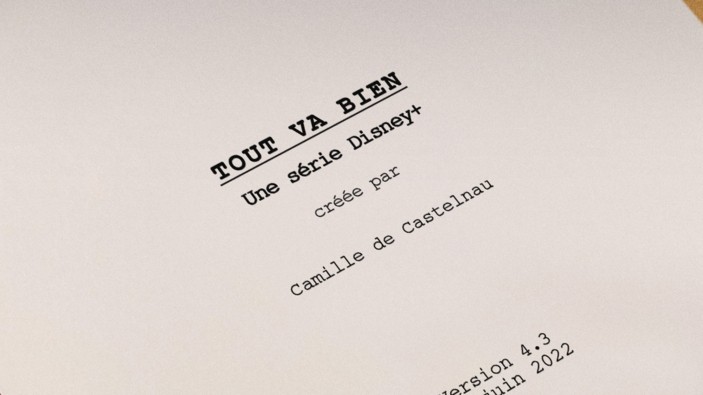 “Tout va Bien” immerses us in the daily life of an ordinary family, therefore inevitably neurotic and conflictual, but when confronted with a catastrophe – the serious illness of one of their children – this affects the life of each of its family members, in particular two generations of women.

This choral dramatic comedy with a fierce tone explores the question of the strength of ties, and also showing how the catastrophe forces everyone to reveal themselves, to think about what matters and deal with things that have been left unsaid and put aside grudges.

“Tout va Bien” is a drama in which we can discover Anne ( Nicole Garcia ), the matriarch of the Vasseur tribe, a successful author of personal development books confronted with a #metoo that affects her publisher and lover. Her husband Pascal ( Bernard Le Coq ) seeks his place with this woman. Claire ( Virginie Efira ), who is very involved and disturbed by her niece’s illness, must also forge ties with the daughter of her companion Antonio ( Eduardo Noriega ). Marion ( Sara Giraudeau ) tries to keep her family life afloat with Stéphane ( Yannik Landrein) and to bear the illness of his daughter Rose ( Angèle Miele ) by escaping into a relationship with Louis ( Mehdi Nebbou ). Or even Vincent ( Aliocha Schneider ), Claire and Marion’s brother, a steward who appears to be detached from everything but who is going to take the full force of the reality of life.

“I want ‘Everything is fine’ to be a realistic and therefore often funny series. I know how much a child’s serious illness can frighten an increasingly demanding public, which we sometimes imagine doesn’t want to see “that”. But I want us to feel warm in this series, that there is a pleasure of fiction, because we share the lives of characters struck by one of humanity’s worst nightmares… but who continue to live, with “that”, in spite of “that”, or for “that”. With their personal stakes, their shameful little secrets, their less official but sometimes joyful disasters”

“Tout Va Bien” will be streaming on Disney+ in France in 2023 and will likely be released internationally on Disney+, similar to other shows like “Weekend Family” and “Oussekine”.

Roger has been a Disney fan since he was a kid and this interest has grown over the years. He has visited Disney Parks around the globe and has a vast collection of Disney movies and collectibles. He is the owner of What's On Disney Plus & DisKingdom. Email: Roger@WhatsOnDisneyPlus.com Twitter: Twitter.com/RogPalmerUK Facebook: Facebook.com/rogpalmeruk
View all posts
Tags: Tout va Bien