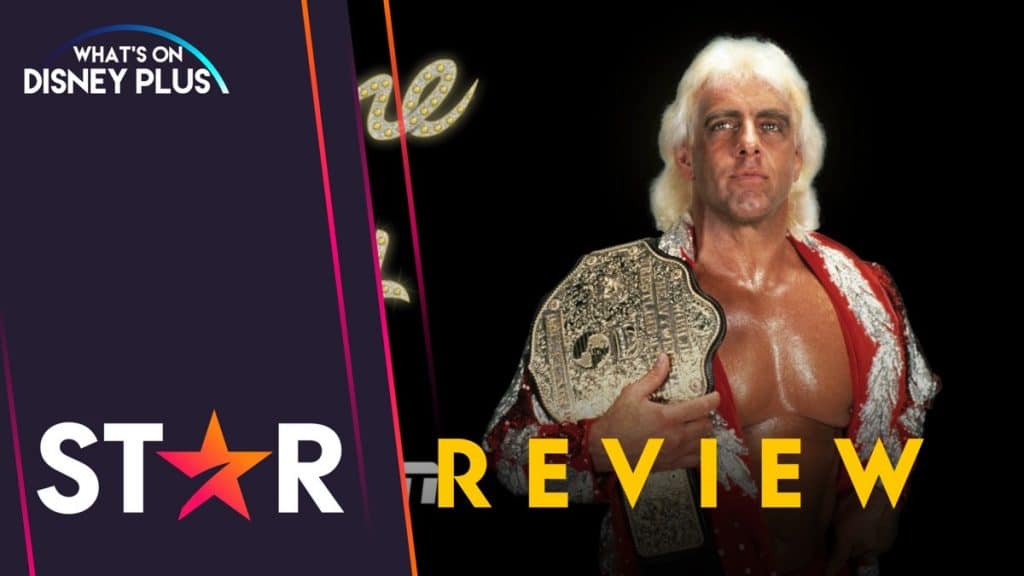 In this feature-length episode of ESPN’s groundbreaking “30 For 30” sports documentary series, we take a detour into the wild and crazy world of professional wrestling. More specifically, the spotlight is placed on 16-time (at least) World Champion, “Nature Boy” Ric Flair. A man known not only for his prowess in the ring but also his jet setting lifestyle outside of it…

I’m writing this review as a long time pro wrestling fan. So much so that what began as a childhood obsession with colourful characters eventually evolved into co-founding my own specialist news website which I ran for nearly 5 years. As a result, a documentary like “Nature Boy” is extremely basic to me. And yet, I think that the fact it keeps things simple and refuses to get too deep into the history of the industry of the man it’s profiling works to its advantage. This film endeavours to get beneath the surface of the spectacle and drill into the core humanity of Ric Flair. And it mostly succeeds at that goal.

I alluded to this in the opening paragraph but for those not familiar with the subject of this film, Ric Flair is a professional wrestler who rose to prominence in the 1980s (though his regular in-ring career continued well into the 2000s). While the larger than life Hulkamania ran wild for the WWF, Flair main evented for the rival NWA. As Hogan made kids cheer while delivering spectacle, Ric was the “ultimate professional wrestler” in the ring and outside of it. He prided himself both on being able to out-wrestle the very best and being able to afford the very best of lifestyles. He was the perfect character for the greedy 1980s. A man who was a success and revelled in it. Thus, his popularity exploded and Ric Flair became a household name throughout America whether you were a hardcore or casual pro wrestling fan.

However, while the broad story of Ric Flair’s career is covered here, that isn’t really the true narrative thread. What this film does a terrific job of is digging below the surface of Ric Flair to probe into the psyche of Richard Fliehr; the man behind the legend. You see, Ric Flair was not just a character on TV. Richard Fliehr was Ric Flair. So, he always spent more money than he really had to spend. He was incapable of being faithful to his many wives and thought nothing of bragging about sleeping with multiple women every night. And yes, that meant he was often an absent father who tried to buy the love of his children with endless gifts. All of this is openly discussed and is what will mostly likely be riveting for those barely even aware of the larger subject. At the core of this story is the study of a flawed yet fascinating human being.

Another aspect that ESPN deserves credit for is the broad spectrum of interviewees. Flair himself is obviously the man asked the central questions but there is real effort to pull in names from all eras of his career. All of them have something worthwhile to the conversation and most importantly, it’s not all positive. The only potential glaring omissions from this stellar lineup are Vince McMahon and Eric Bischoff (the closest equivalent to a “boss” that he had at the two biggest companies) but it’s entirely possible that both were approached and refused to participate.

It is worth noting at this point that WWE as a corporate entity were fully cooperative with this production, even going so far as to provide the vast majority of the archive footage used. This is particularly surprising when you consider the unflinching portrayal of Flair throughout. In fact, he ends up coming across as a somewhat pitiable, pathetic figure by the time the end credits roll. But even then, Paul “Triple H” Levesque (a top executive in the WWE both back in 2017 and especially now) is shown openly acknowledging and discussing the deep flaws of a man he idolises and patterned his main event in-ring career after. Considering that the WWE has painstakingly mythologised Flair over the last 20+ years, seeing representatives being so forthright is eye opening.

In conclusion, the wrestling history aspect of this documentary is threadbare and barely passable, even if that comes from an understandable desire to be accessible to a casual audience. However, what it glosses over in that area it makes up for by going for a deep dive into the psychology who became his character and didn’t know how or when to stop (quite literally, as Flair had his supposed “last match” just 2 weeks ago – as of writing – at the age of 73!) Because of this more human focus, I’d recommend this regardless of your history with pro wrestling as this is a cautionary tale worth listening to.

Nature Boy is available on Disney+ in a maximum resolution of 1080p Full HD on compatible devices. This particular episode of “30 For 30” did receive a North American DVD release back in 2018 but that is now out-of-print, leaving only relatively expensive second-hand copies on the market at a comparatively low quality.

Nature Boy does not currently include an “Extras” tab on its page as of writing, meaning that not even the standard “promo clip” is available.

“Nature Boy” is available to stream on Disney+ now in many countries including the UK and Ireland, Australia and New Zealand, the Netherlands, Spain and more. It is scheduled to come to Disney+ in Canada on August 19th, 2022. U.S. readers will find the documentary on ESPN+.

What are your thoughts on “Nature Boy”?

Jon has been a Disney fan all of his life. From wearing out those expensive VHS tapes and visiting Disneyland Paris as a child to becoming a huge fan of the MCU in adulthood, Disney has helped shape some of the happiest, most fun moments he can remember.
View all posts
Tags: 30 for 30, espn, Nature Boy, star