National Geographic has announced details on the release of a brand new documentary, “Rebuilding Paradise”, which is from Academy Award-winning director Ron Howard and Imagine Documentaries in select theatres (physical and digital) on July 31st, 2020. For every ticket sold, $1 will go to charities supporting the town of Paradise, California. Hailed by The Hollywood Reporter as “a sincere and skillfully assembled tribute to a community’s fortitude,” Rebuilding Paradise is a moving story of resilience in the face of tragedy, as a community ravaged by disaster comes together to recover what was lost. The doc premiered to positive reviews at the 2020 Sundance Film Festival, was a recent selection at AFI Docs and will play next week at the Edinburgh Film Festival.

“Now more than ever, we need to remember that when people come together for the greater good we can make a positive change on our shared future. The passion and commitment of the people of Paradise, to one another and to rebuilding their community, is a reminder of the strength and resilience of the human spirit,” stated director Ron Howard. 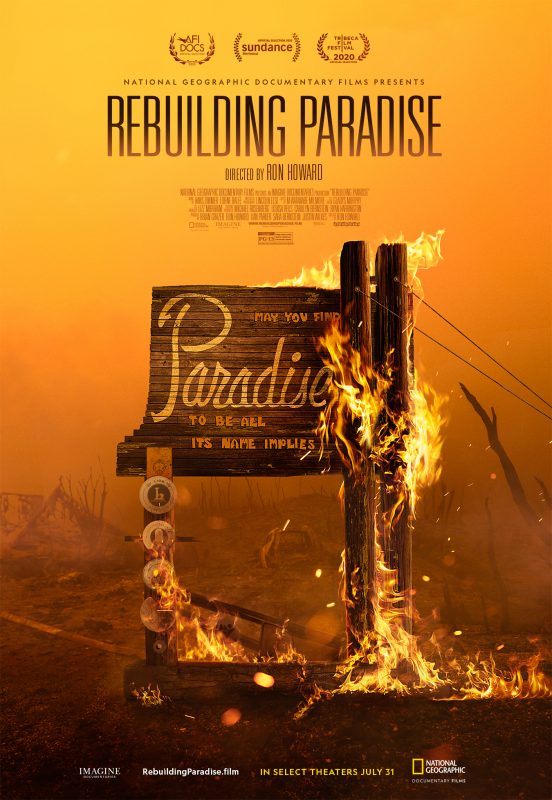 On the morning of Nov. 8, 2018, a devastating firestorm engulfed the picturesque city of Paradise, California. By the time the Camp Fire was extinguished, it had killed 85 people, displaced 50,000 residents and destroyed 95% of local structures. It was the deadliest U.S. fire in 100 years — and the worst ever in California’s history.

As residents faced the damage to their lives, to their homes and to more than 150,000 acres in and around their 141-year-old town, they did something amazing: They worked together to heal. The community members went on to forge a bond stronger than what they had before the catastrophe, even as their hope and spirit were challenged by continued adversity: relocations, financial crises, government hurdles, water poisoning, grief and PTSD.

From the moment the crisis began, Oscar-winning director Ron Howard led a filmmaking team to the city and would go on to spend a year with Paradise residents, documenting their efforts to recover what was lost. The Camp Fire and its overwhelming aftermath became a de facto lesson in what we all must do: Protect our environment, help our neighbors, plan for future dangers and remember to preserve the traditions that unite us — just as these resilient citizens did when they began the important task of REBUILDING PARADISE.

The film is being released through the leading distributor of documentary films, Abramorama.   No Disney+ release has yet been confirmed.

Are you excited to see this new Nat Geo documentary?

Roger has been a Disney fan since he was a kid and this interest has grown over the years. He has visited Disney Parks around the globe and has a vast collection of Disney movies and collectibles. He is the owner of What's On Disney Plus & DisKingdom. Email: Roger@WhatsOnDisneyPlus.com Twitter: Twitter.com/RogPalmerUK Facebook: Facebook.com/rogpalmeruk
View all posts
Tags: national geographic, rebuilding paradise