The magazine will feature in-depth, behind-the-scenes stories from each leg of the series, which traveled around the globe to Peru, Morocco, Hawaii, New Zealand, Laos and Alaska, along with supplemental content on each location found only in the National Geographic archives. In addition to the digital hub, print editions will be available at select events throughout the country. The digital magazine and hub were produced by National Geographic Channel in promotion of the series.

“It was an extraordinary expedition to bring Uncharted to life,” said Ramsay. “And this magazine gives us the opportunity to take each episode a step further, exploring the incredible people, cultures and experiences from my journeys, along with ideas of how to re-create at home some amazing dishes from around the word. I hope it inspires people’s taste for adventure and leads them to embark on their own journeys.”

“For more than 130 years, National Geographic has been using our media platforms to explore the world’s cultures, a mission we see echoed throughout Gordon’s new series,” said Geoff Daniels, executive vice president of National Geographic unscripted entertainment. “That’s what made Uncharted the perfect television project with which to harness the power of our media content to go deeper in exploring the people and places seen in the series. The magazine is the perfect primer for those excited to tune in, and the perfect companion piece for those who have seen episodes and want to learn more.” 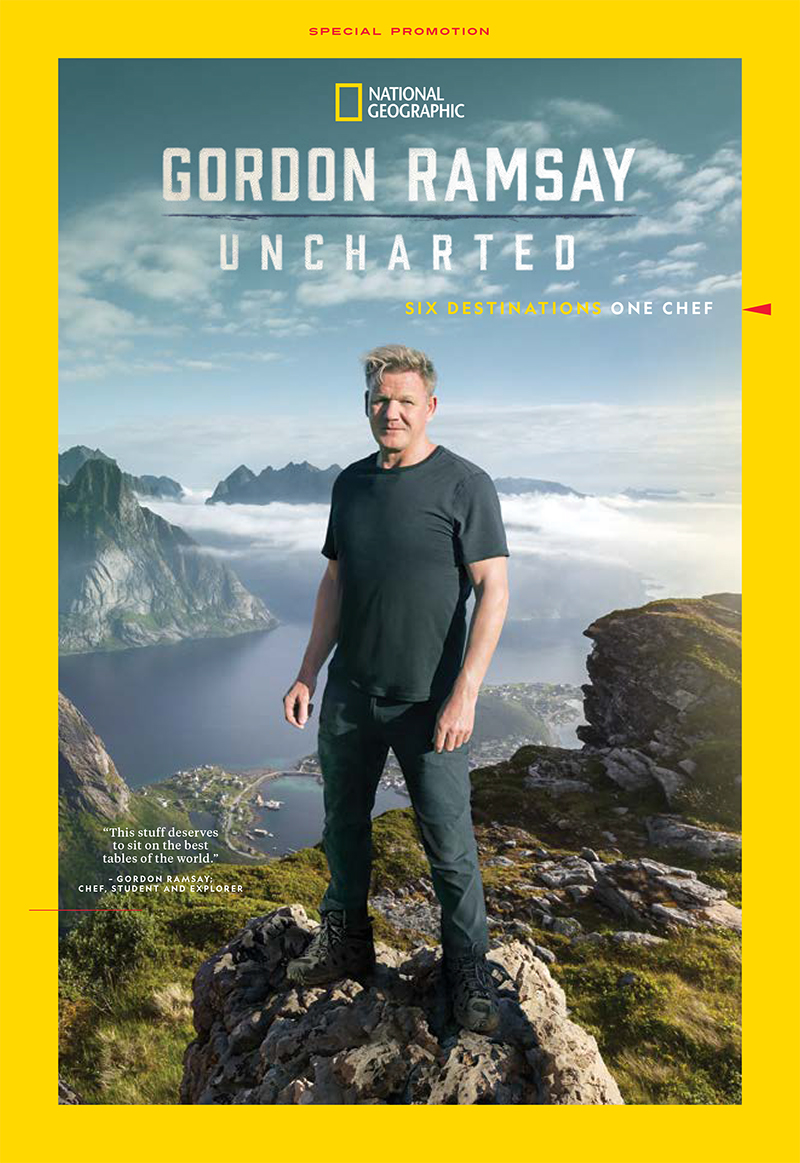 Additional content that will be featured in the magazine and as part of the digital experience includes:

The digital experience will be regularly updated with new content leading up to the premiere of the series.

Gordon Ramsay: Uncharted will premiere Sunday, July 21, at 10/9c. The multi-Michelin-starred chef and Ironman athlete meets with indigenous people and local food legends around the globe to learn about the cultures, dishes and flavors unique to each location. Every ingredient he harvests and dish he tastes will inspire a new recipe from scratch, created to represent the heart of that culture. Each episode concludes with Ramsay challenging himself with a local food legend by his side — putting his newfound skills to the test as they cook a feast together for the natives. For Ramsay, food is the gateway to culture, and every adventure is a portal into the soul of the people and place. From Peru, Laos and Morocco to Hawaii, Alaska and New Zealand, he’ll be roaring through valleys, diving into oceans, hiking through forests and scaling mountains on his relentless pursuit of culinary inspiration. Food and adventure programming is familiar ground for Ramsay, whose 2010 U.K. series for Channel 4, “Gordon’s Great Escape,” saw the venerable chef explore the food culture of India and Southeast Asia.

The series will also air globally in 172 countries and 43 languages. Gordon Ramsay: Uncharted is produced by Studio Ramsay. A second season of the series was announced earlier this spring and will begin production this fall.

Roger has been a Disney fan since he was a kid and this interest has grown over the years. He has visited Disney Parks around the globe and has a vast collection of Disney movies and collectibles. He is the owner of What's On Disney Plus & DisKingdom. Email: Roger@WhatsOnDisneyPlus.com Twitter: Twitter.com/RogPalmerUK Facebook: Facebook.com/rogpalmeruk
View all posts
Tags: gordon ramsey, national geographic, uncharted