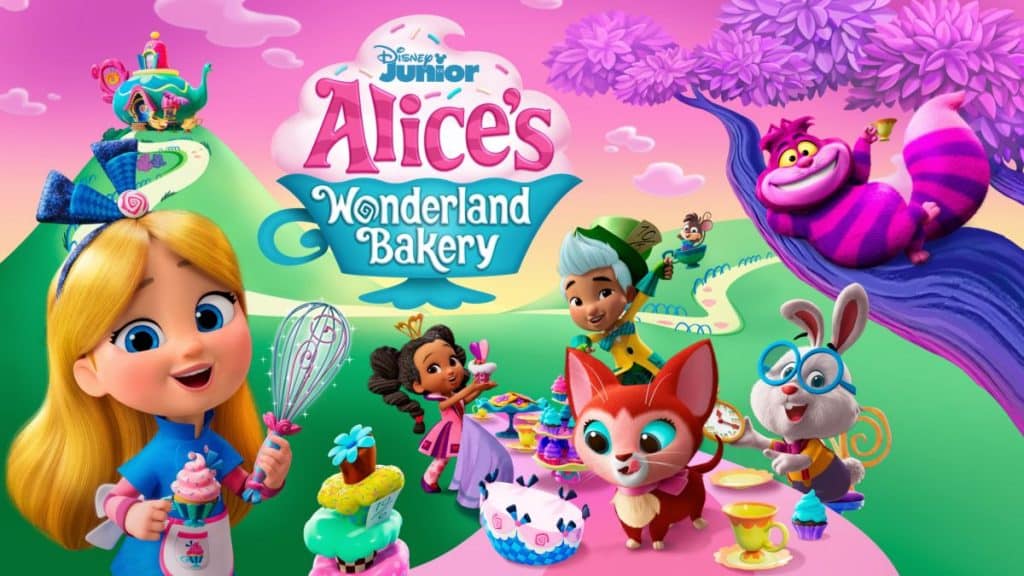 Disney has announced that four new episodes of the first season of the Disney Junior animated series, “Alice’s Wonderland Bakery”, will be coming to Disney+ in the United States on Wednesday, 19th October 2022.

Disney Branded Television’s “Alice’s Wonderland Bakery” is Disney Junior’s fantastical animated series for preschoolers and their families inspired by the beloved world of “Alice in Wonderland.” The series centers on Alice, the great-granddaughter of the original heroine and a budding young baker at the enchanted Wonderland Bakery, where her magical treats help bring a new generation of friends and families together.

Geared to kids ages 2-5 and their families, “Alice’s Wonderland Bakery” features Alice’s recipe adventures with her best pals—Fergie, a white rabbit; Hattie, her madcap friend; and Rosa, the Princess of Hearts, as well as her great grandmother’s magical cookbook, Cookie. Alice is inquisitive, persistent and resourceful as she experiments with her baking and invents out-of-the-box solutions for problems that arise. Food is an important part of Alice’s identity, connecting her family from generation to generation and allowing her to discover the distinct family heritages of her friends, each with a wide array of tastes and traditions.

Featuring reimagined versions of familiar iconic characters and introducing memorable new ones, the series puts a vibrant, new take on the classic 1951 film “Alice in Wonderland.” The series highlights diverse cultures and characters as Alice and her friends learn about community through their adventures in the Wonderland Bakery, a magical kitchen that serves the families of Wonderland. Wonderland is home to all sorts of unique families, including the Dodos, the Flowers, the Caterpillars, and the Royal Family, each with their own fascinating cultures and traditions, which Alice and her friends will learn about through their explorations with food. The series’ creative team works with a wide range of consultants who advise on some of the specific cultural elements that are featured.

“Alice’s Wonderland Bakery” is guided by an established curriculum that nurtures multiple areas of child development: physical, emotional, social and cognitive, critical thinking and creative skills, as well as moral and ethical development. Each episode features two 11-minute stories that demonstrate the importance of counting, measuring, cause-and-effect and following directions. The show celebrates the culture and creativity of food, highlights self-expression and imparts age-appropriate social and emotional lessons about friendship, collaboration and community.

The first sixteen episodes of “Alice’s Wonderland Bakery” are available on Disney+, as Disney has been dropping new episodes in batches.

Are you looking forward to having new episodes of “Alice’s Wonderland Bakery” arrive on Disney+?