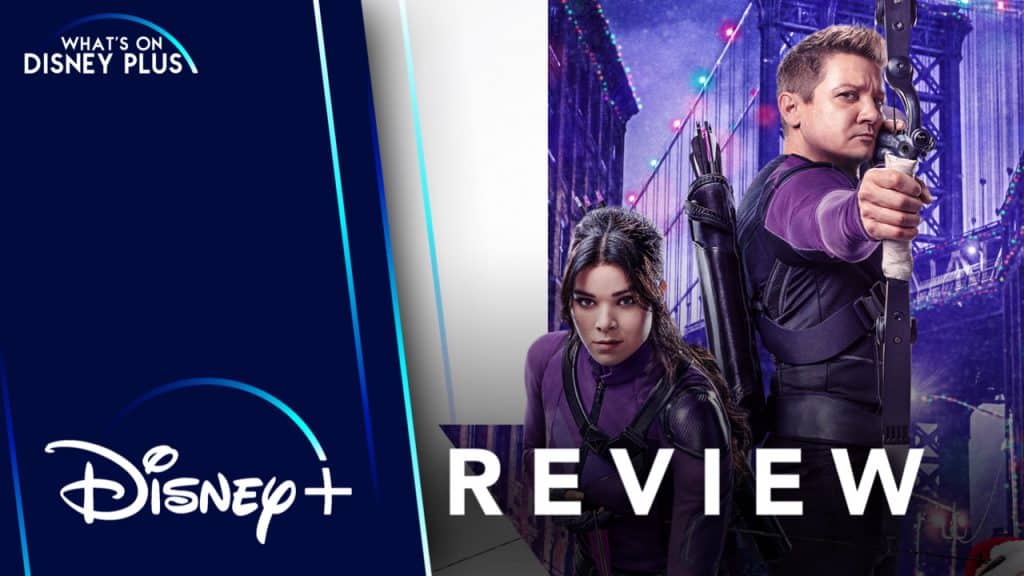 Marvel Studios latest live-action series to head to Disney+ is “Hawkeye”, which is set in a post-blip New York City at Christmas and introduces Kate Bishop into the Marvel Cinematic Universe.

The first two episodes are being released on Disney+ on Wednesday 24th November 2021 and is the perfect way to introduce Kate Bishop and set up her friendship with Hawkeye.

It all begins during the Chitauri invasion in New York from the original “Avengers” movie when a young Kate is saved by Hawkeye and serves as the inspiration for her.  With a quick animated credits montage and some little moments throughout the first episodes, it’s quickly established that Kate is an excellent archer and has also become a master in multiple martial arts, including fencing.

The majority of the first episode is about establishing who Kate is, where she’s from and how she smells a rat with her future step-father, who seems so generically sleazy that he could be a Scooby-Doo villain.

Meanwhile, in the first episode, Clint Barton is just in New York City spending quality time with his kids, which includes checking out “Rogers: The Musical”.  We see him just adapting to everyday life after his family returns after defeating Thanos in the events of “Avengers: Endgame”.  One of the things that quickly becomes apparent is that he is suffering on multiple levels, the loss of Natasha, the loss of hearing in one ear, and generally being the forgotten member of the “Avengers”.

But when Kate Bishop comes into contact with the Tracksuit Mafia, who are trying to steal some expensive “illegal” items from an underground auction, she ends up wearing the “Ronin” suit that Hawkeye wore during the time when his family had been taken.  During that time, he was a violent vigilante, who took to the streets of New York and didn’t care who he killed. 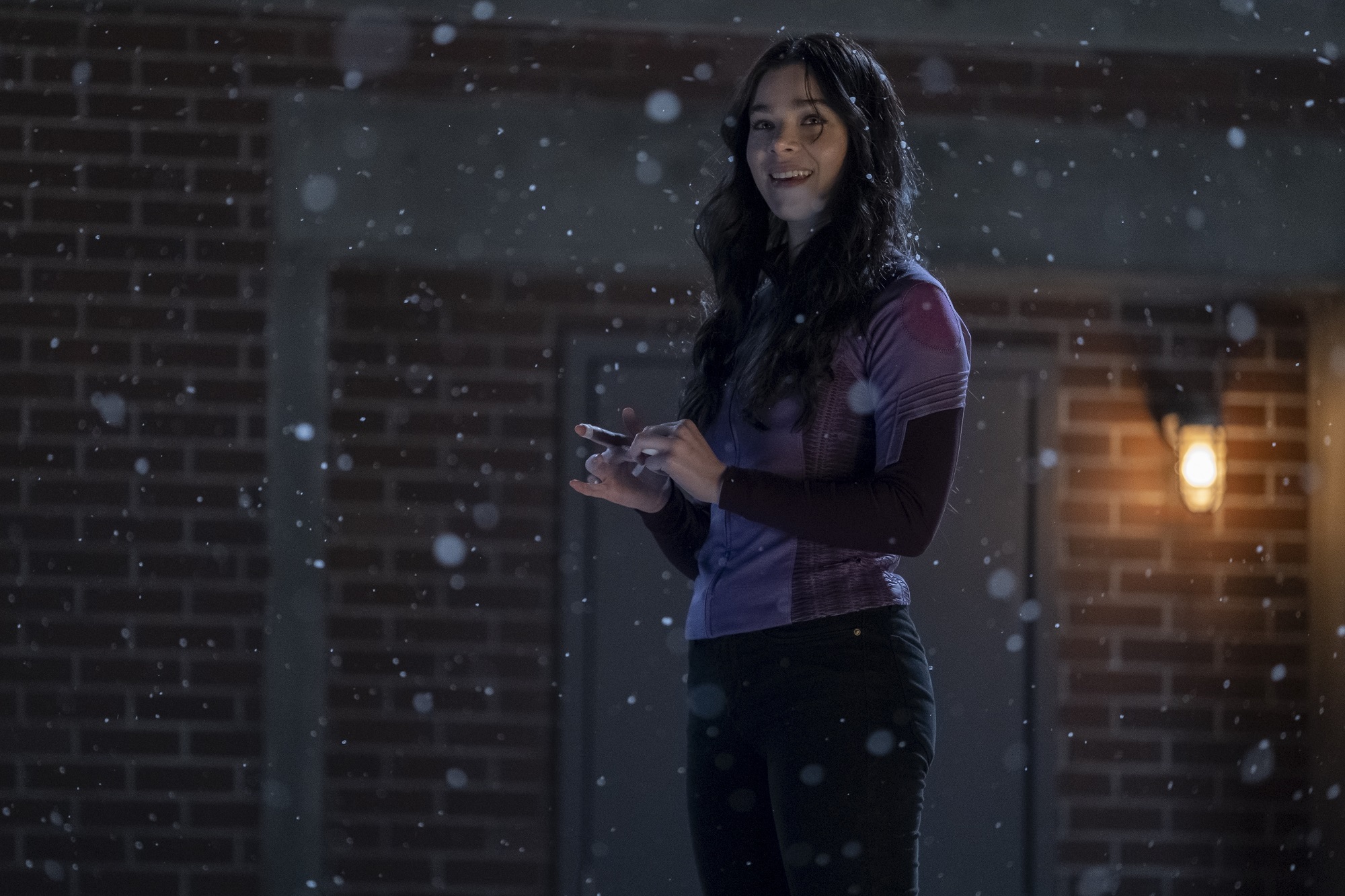 His time as Ronin comes back to haunt him as he tracks down Kate Bishop, bringing him into conflict with some old enemies and introduces us to some new ones. With this being a Disney+ series, they’ve got a little more time to build out both Kate and Clint as characters slowly.

Hawkeye has always played second fiddle in any movie he has been in. He is the forgotten Avenger, and while he is often the heart of the group, he will never match up with iconic characters like Captain America Hulk or Thor.   So it’s nice to see him getting some screen time to give us a chance to know him even more.

Much like “Black Widow”, this series is overdue, as both members of the Avengers have just been background characters, but now, as the MCU expands, we get that extra time.   After I watched “Black Widow”, I felt that it could have benefited from being a Disney+ series, since all the new characters were so interesting.

With “Hawkeye”, based on the first two episodes, it does feel like having that extra time to develop the characters is really going to help and, more importantly, set up the next generation of Avengers with Kate Bishop. 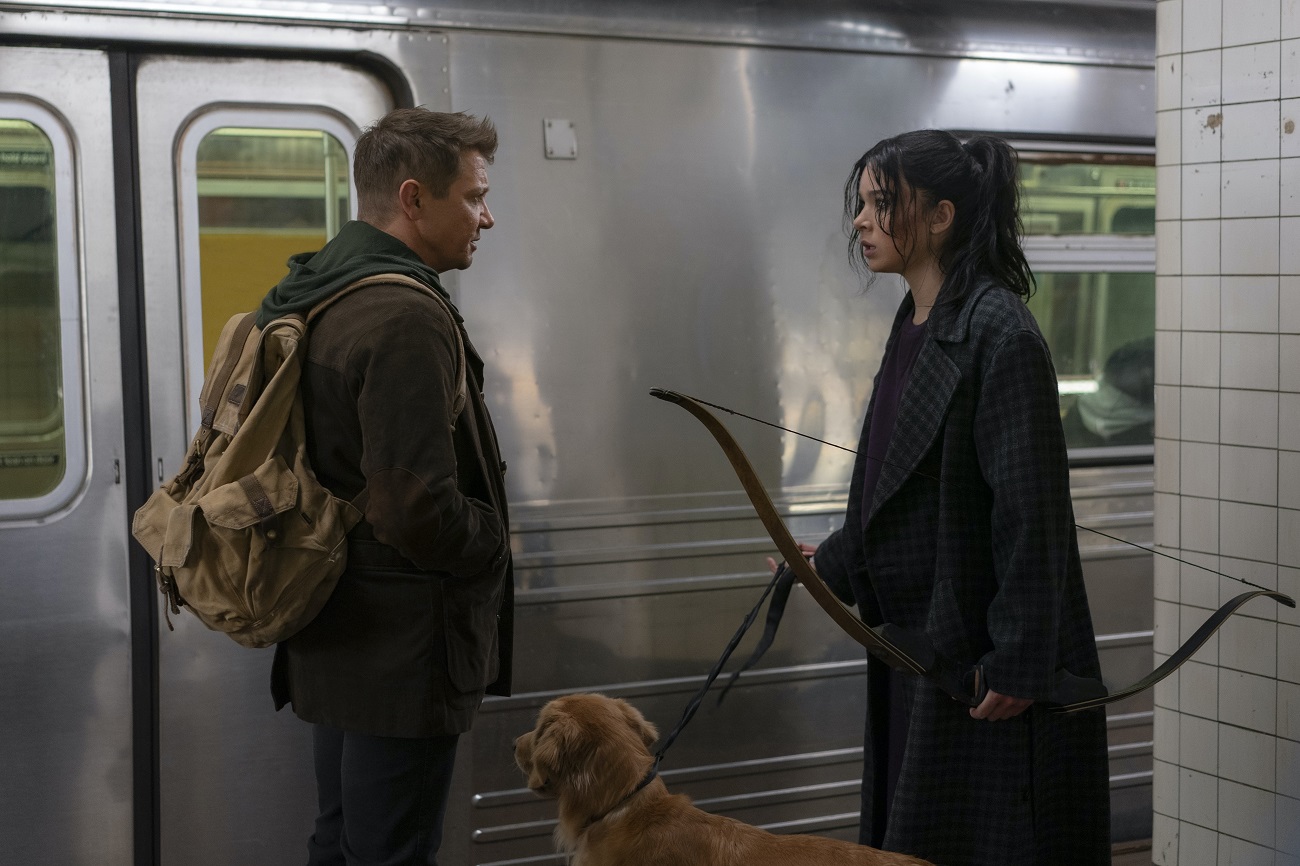 I think Disney dropping both two episodes is a good idea, because the first episode is mainly about Kate Bishop, and it’s in the second episode, where we see the connection between both archers grow and development.  Had just one episode been released, many fans might have been disappointed, but that second episode takes the story to the next level, since it ends just when the storyline moves past the introduction stage.

One thing that is very noticeable about the “Hawkeye” series, is that it’s much more grounded in reality.  It’s about two ordinary people, with many talents and skills, who come together for the greater good.  There isn’t anything in these first two episodes (bar the opening scene with the Aliens invading!) that feels crazy.

Unlike “WandaVision” and “Loki”, which raised the level in craziness, “Hawkeye” is down to earth simple crime-fighting.  It’s a massive difference to many of the other Marvel shows and films we’ve seen this year.  It’s more in the same category as “The Falcon And The Winter Soldier”, though even more simplistic.

That’s what’s nice about “Hawkeye” and I’m really looking forward to seeing where this story goes.  It also shows why a Disney+ series can provide Marvel with opportunities, that just wouldn’t be possible on the big screen.  There is no way Kate Bishop would be as fleshed out as a character in a film so quickly.

Ultimately, the first two episodes, “Hawkeye”, are a delightful first step into the series. There is plenty of humour and character-building moments.   It actually reminds me more of the Netflix Marvel series than the Disney+ series so far, since they also were much more grounded, separate from the rest of the universe, but also entertaining to watch.

Roger has been a Disney fan since he was a kid and this interest has grown over the years. He has visited Disney Parks around the globe and has a vast collection of Disney movies and collectibles. He is the owner of What's On Disney Plus & DisKingdom. Email: Roger@WhatsOnDisneyPlus.com Twitter: Twitter.com/RogPalmerUK Facebook: Facebook.com/rogpalmeruk
View all posts
Tags: hawkeye, review