At last years D23 Expo, Disney announced it would be bringing Hilary Duff back to our screens as Lizzie McGuire, which resulted in millions of fans getting excited about the revival of this popular show.

Over the winter, two episodes of the new series were filmed and at the beginning of the year, we saw a sneak peek trailer for everything coming to Disney+ in 2020, giving us a small hint at what was to come.

However following that, it was revealed that the original showrunner Terri Minsky was no longer involved in the project.

And shortly afterwards, actress Hilary Duff took to Instagram to openly discuss some of issues with the upcoming Disney+ Original Lizzie McGuire revival series.   She said:

“Was incredibly excited to launch ‘Lizzie’ on D+ and my passion remains! However, I feel a huge responsibility to honor the fans’ relationship with LIZZIE who, like me, grew up seeing themselves in her. I’d be doing a disservice to everyone by limiting the realities of a 30 year old’s journey to live under the ceiling of a PG rating. It’s important to me that just as her experience as a preteen/teenager navigating life were authentic, her next chapters are equally as real and relatable. It would be a dream if Disney let us move the show to Hulu, if they were interested, and I could bring this beloved character to life again.”

When Hilary Duff went on her honeymoon, the show production was paused and now with the current coronavirus situation closing down filming, the show is currently delayed.

There is some good news, as a new image was shared on Instagram by Lizzie McGuire fan account @peterstanslizzie, showing the creative team behind the show, including Terri Minksy, working together on a virtual meeting.  Which does give us some hope that Disney are working on bringing this series to our screens and hopefully ironing out the issues with the series. 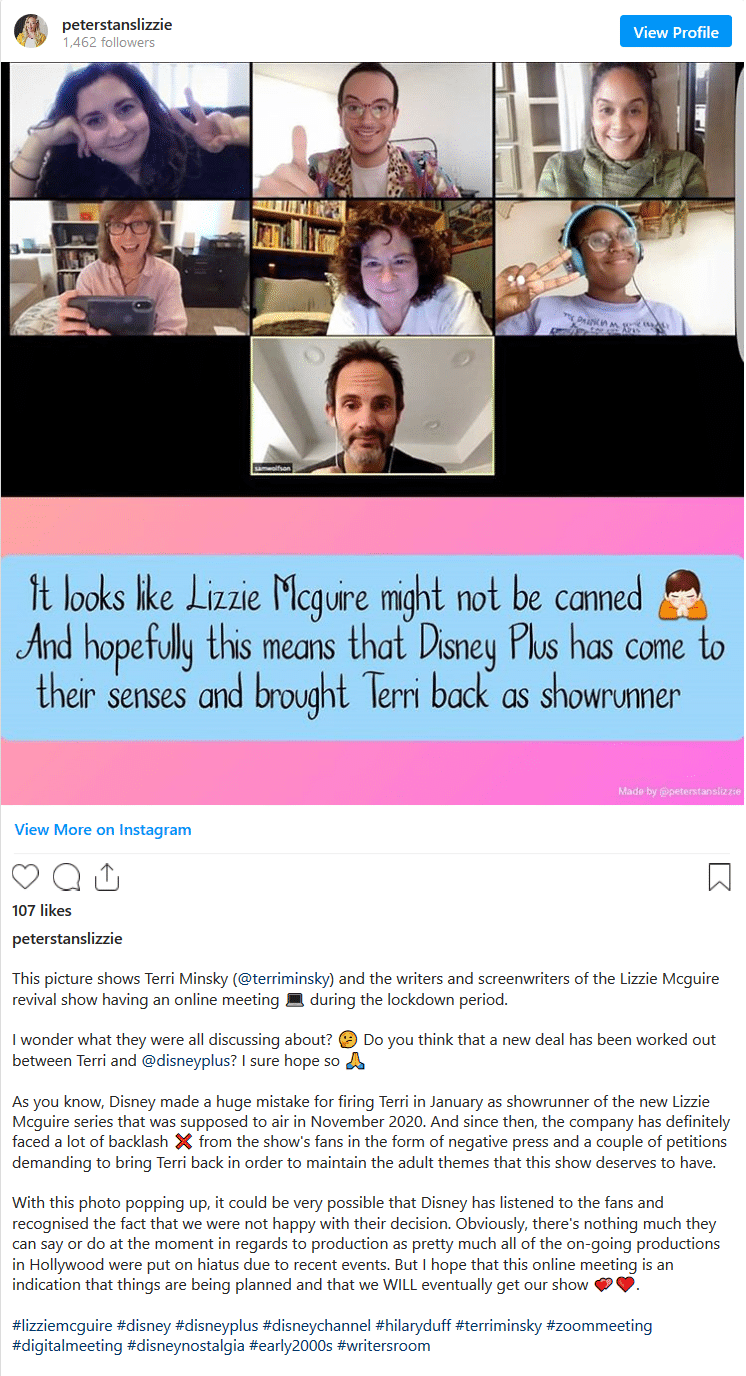 Hilary Duff and Terri Minsky have been vocal about the show respecting the Disney Channel original character, while also staying true to real life, since she is no longer a 14 year old girl living with her parents, but a 30 year old woman living in New York City.

Hilary spoke with People magazine that

“There’s still conversations going on in hopes that we can find a way to meet in the middle and both bend a little bit. I understand that they have to protect their brand and there’s pretty strict guidelines on what that looks like.

I just have to make sure it’s the right move for me and that I feel like I’m honoring her and the character, and that it will be relatable to the people who grew up with her because those are the people I really want to speak to.”

Hopefully with this extra time being available to work together on the show will bring Lizzie McGuire back to Disney+ soon.

Are you looking forward to the new Lizzie McGuire series?