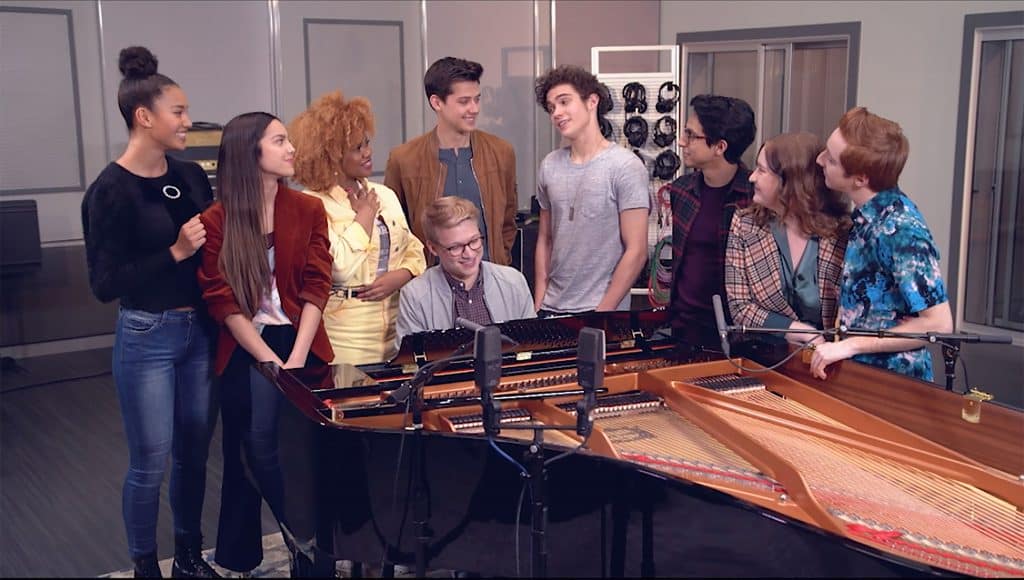 Disney has announced that production has resumed in Salt Lake City on the second season of the popular Disney+ series “High School Musical: The Musical: The Series” as the East High drama students prepare to perform “Beauty and the Beast” as their Spring musical. Slated for a late 2020 debut on Disney+, the second season will include reimagined musical numbers from both the “High School Musical” movies and the stage production of “Beauty and the Beast,” in addition to brand-new songs that join hits from season one like “Born to Be Brave” and “Just for a Moment.”

Created and executive-produced by Tim Federle (Golden Globe and Academy Award-nominated “Ferdinand”), the series has been “Certified Fresh” on Rotten Tomatoes as measured by a consensus of reviews by top critics and audience members.  It was recently nominated for a GLAAD Media Award.

The soundtrack entered the Billboard 200 at (#31). Most recently, the single “All I Want,” written and performed by Olivia Rodrigo, has garnered over 52 million streams globally across all platforms. Rodrigo will perform the song on “Live with Kelly and Ryan” on Thursday, February 6 (please check local listings).

“We’re excited about Tim’s plans for the new season.  He continues to amaze and surprise us with the relationships and stories he’s creating for this unbelievably talented cast.  Season two will be filled with even more of the humor, heart, and music that made HSMTMTS a break-out series on Disney+,” said Ricky Strauss, president, Content & Marketing, Disney+.

Gary Marsh, president and chief creative officer, Disney Channels Worldwide, said, “The opportunity to ‘borrow’ one of the most classic Disney scores – and build our second season of HSMTMTS around it – is like having your wish upon a star granted.”

“The outpouring of love and support for season one has been incredibly exciting, and I’m thrilled that the Wildcats are putting on ‘Beauty and the Beast’ in season two,” said Tim Federle. “It was one of the first Broadway shows I ever saw, when I was 14, and it’s got all the perfect metaphors for the high school experience: Do people judge me for how I look? What is true love? Will I achieve the future I dream of? And, perhaps most importantly, it’s got dancing forks.”