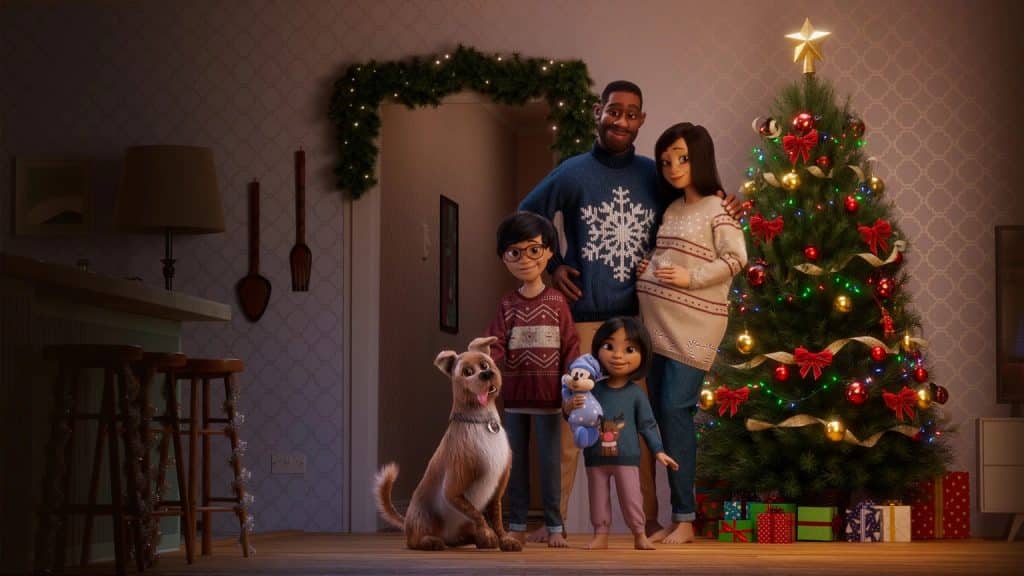 Disney has released a magical new Christmas advert to mark the holiday season, supporting long-term charity partner Make-A-Wish. “The Gift” is a three-minute animated short that celebrates the comfort that storytelling brings families during times of change and how it deepens their bonds through togetherness.

The advert is the final instalment of Disney’s ‘From My Family To Yours’ trilogy, which premieres on Wednesday, 2nd November 2022, across TV and Digital plus Disney’s own channels in 46 countries across Europe, North America, South America, Africa and Asia.   The short will be released on Disney+ on Friday 4th November 2022.

Disney’s first-ever Christmas advert, ‘Lola’ was released in 2020. In this first instalment, fans were introduced to Nicole and her grandmother, Lola, and watched how their bond deepened as festive traditions were passed down through the generations.

Last year’s sequel, ‘The Stepdad’, followed a grown-up Nicole and her own children, Max and Ella, who welcomed stepdad Mike into their home. At the heart of the story was a very special storybook that celebrated the magic that small moments like reading together creates for families.

Both the 2020 and 2021 adverts reached over 184 million views worldwide combined.  The previous shorts had also been released on Disney+ for a limited time.

“The Gift” is a powerful story of sibling relationships, experienced through the eyes of youngest child Ella, as she adjusts to the changing family dynamic. At the heart of the story is a beloved glow in the dark Mickey Mouse soft toy, which connects both past, present and future. Whilst the elder brother, Max is first shown giving Ella the Mickey Mouse to comfort her at night, Ella then gifts the soft toy to her new-born sibling at their first meet, welcoming them to the family.

Check out “The Gift” below:

“For the last three years millions have watched our characters in our ‘From Our Family To Yours’ animated series, as they spend time together building connections and making memories. We set out to create a family unit that would resonate with audiences world-wide. We are truly grateful for the support we have received for this festive campaign and hope that families and fans enjoy this fitting, heart-warming final instalment of the trilogy.”

Providing a powerful vocal narrative to this year’s story, Jessica is best-known for voicing Luisa Madrigal in Disney Encanto and singing the viral sensation Surface Pressure, which reached the top three in the UK single charts earlier this year, with over 276 million YouTube views.

Jessica Darrow, star of Encanto who performs the soundtrack ‘A Little More’, said:

“The holidays hold such a special place in my heart and what better way to come together with family and loved ones than through the joy of music? It was such a wonderful song to perform, and I can’t wait for everyone to see the heart-warming story which concludes this inspiring trilogy.”

A collection of products inspired by the advert, including the glow in the dark Mickey Mouse soft toy by Simba, are available for fans to purchase at selected retailers across EMEA.

Disney’s 2022 ‘From Our Family To Yours’ campaign will once again support long-term charity partner and  Disney is encouraging fans all over the world to join in and donate to Make-A-Wish and will match all qualifying donations up to $100,000 helping to grant even more wishes.

“The Gift” has been developed and produced by Disney’s Consumer Products, Gaming & Publishing creative team, led by Angela Affinita, Director of Brand Marketing and Creative, in partnership with Flux Animation Studios in New Zealand.

Roger has been a Disney fan since he was a kid and this interest has grown over the years. He has visited Disney Parks around the globe and has a vast collection of Disney movies and collectibles. He is the owner of What's On Disney Plus & DisKingdom. Email: Roger@WhatsOnDisneyPlus.com Twitter: Twitter.com/RogPalmerUK Facebook: Facebook.com/rogpalmeruk
View all posts
Tags: the wish