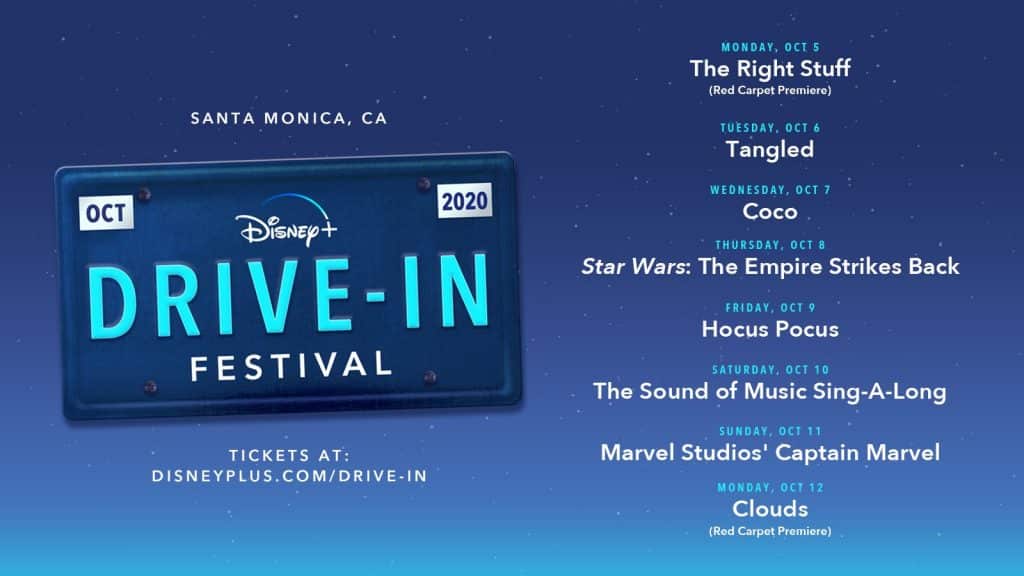 Disney has announced it will be hosting a special Disney+ Drive-In Festival from October 5-12, 2020, Disney+ will come to life at the Disney+ Drive-In Festival at the Barker Hangar in Santa Monica, California. The screening series will bring guests together to enjoy the best of Disney, Pixar, Marvel, Star Wars, and National Geographic under the stars in a safe and entertaining experience. The week will kick off with the world premiere of “The Right Stuff” before it starts streaming Friday, October 9 on Disney+. After six nights of fan-favorite screenings open to the public, the series will wrap with the premiere of the Disney+ Original Movie “Clouds,” debuting October 16 on the service.

The festival will be filled with beloved movie nights celebrating the 10th anniversary of the Walt Disney Animation Studios film “Tangled” and the 40th anniversary of “Star Wars: The Empire Strikes Back” alongside the Los Angeles return of “The Sound Of Music Sing-A-Long” for the 55th anniversary of the Rodgers & Hammerstein classic film. In honor of Hispanic Heritage Month, the festival will feature the Pixar Animation Studio film “Coco” on Wednesday, October 7 while Marvel Studios’ “Captain Marvel” will screen on Sunday, October 11 in celebration of International Day of the Girl. On Friday, October 9, guests can join Disney+ for a frightfully fun Halloween-themed night featuring “Hocus Pocus” and more spooky surprises in store. Each night will get started with a classic animated short, fan-favorite episodes of “The Simpsons” or sneak peek trailers from Disney+ Originals on the big screen.

In compliance with State and County requirements, the Disney+ Drive-In Festival will follow safety guidelines to protect all guests and staff:

Will you be attending this event?

Roger has been a Disney fan since he was a kid and this interest has grown over the years. He has visited Disney Parks around the globe and has a vast collection of Disney movies and collectibles. He is the owner of What's On Disney Plus & DisKingdom. Email: Roger@WhatsOnDisneyPlus.com Twitter: Twitter.com/RogPalmerUK Facebook: Facebook.com/rogpalmeruk
View all posts
Tags: disney, drive in