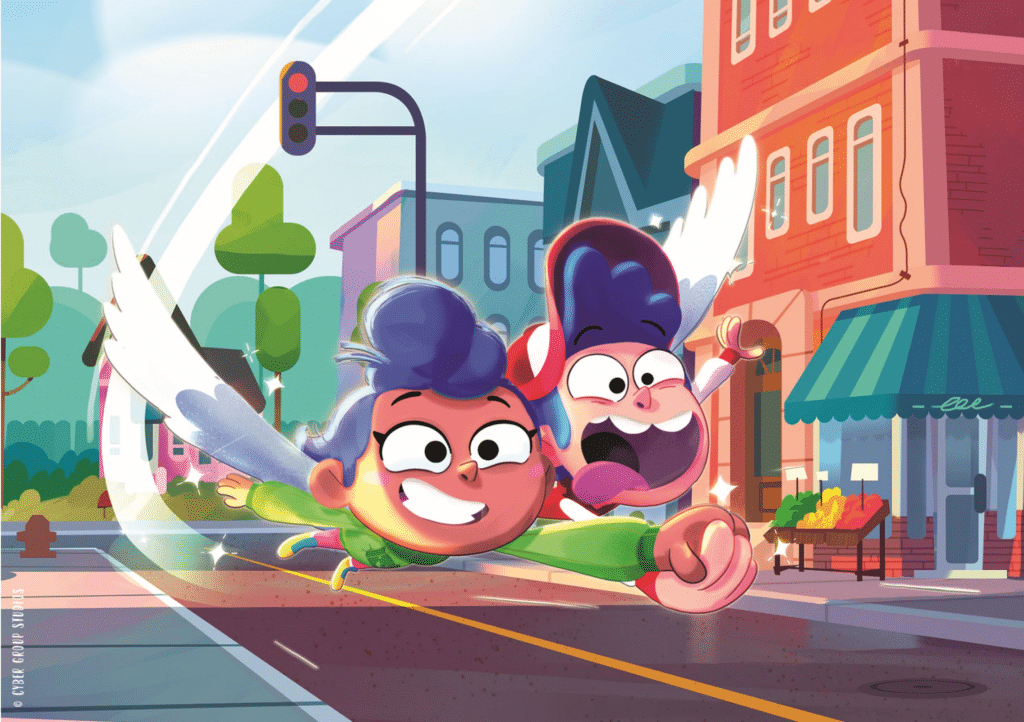 Disney has recently signed a deal with Cyber Group Studios, who are the creators behind the Gigantosaurus series, to bring a brand new animated series “50/50 Heroes”.

This new series consists of 52 episodes, that are 11 minutes each.  It’s aimed at children from 6 to 10 years old, follows the adventures of Mo and Sam, half-brother and sister, aged 11 and 9. One day they find out that they have inherited some powers from their great-great-great-grandma who had a fling with a superhero many moons ago. But, as half-siblings, they must share these powers down the middle. Upshot: these two “sorta superheroes” run half as fast, turn half-invisible! No latex suits for these heroes, and no missions to save the planet. But having superpowers can be actually very cool when you are a kid. What about using it to get this ice cream or to go to the movie theater with your friends while you have to be somewhere else with your mom at the same time! All our half-brother & half-sister Mo and Sam will need to do to make these superpowers work is simply to be on the same page…. But this will be quite a challenge!

50/50 Heroes is based on an original idea of Romain Gadiou and Chloé Sastre, co-writers of Cyber Group Studios’ Mirette Investigates and Tom Sawyer animated series. Graphic designs have been made by two key artists from renown “Collective Steak”: Yann de Preval for character designs and Anthony Vivien for the backgrounds, who have worked on series such as 101 Dalmatian Street and Muffin Jack. The series will be directed by the talented Cédric Fremeaux, who served as Storyboard Supervisor on the Chip’N’Dale reboot for Disney+ series.

The series has been commissioned by France Télévisions and is currently in production and has been pre-acquired by The Walt Disney Company for Germany and Eastern Europe.  No other international releases have yet been announced, but they are working with Disney on a number of projects, so hopefully we will see it arrive on Disney+ around the globe.

Thanks to DisneyTVA News for the tip off

Roger has been a Disney fan since he was a kid and this interest has grown over the years. He has visited Disney Parks around the globe and has a vast collection of Disney movies and collectibles. He is the owner of What's On Disney Plus & DisKingdom. Email: Roger@WhatsOnDisneyPlus.com Twitter: Twitter.com/RogPalmerUK Facebook: Facebook.com/rogpalmeruk
View all posts
Tags: 50/50 Heroes