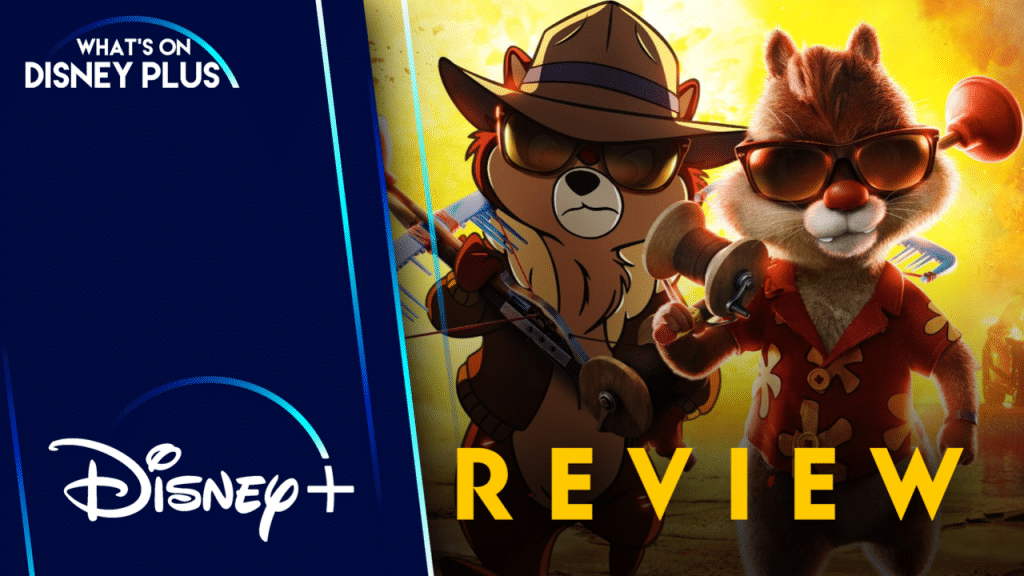 Chip ‘n Dale: Rescue Rangers gives fans what feels like an inside look at the real lives of their favorite chipmunks. This isn’t your typical Rescue Rangers movie, this time Chip and Dale are merely actors that were given their own show. Years after it is canceled, the two estranged toons must come together to solve a real life mystery and save a friend in need. It is clear that Who Framed Roger Rabbit influenced this film, which is a very good thing.

The style is hybrid live action and CG, and it really works. Getting to see this side of characters like Chip, Dale, Gadget, Zipper, Monterey Jack, and even Peter Pan, is a whole lot of fun. Sometimes the human to toon interactions look a bit off, but that is to be expected with this style of film. It doesn’t ruin the movie, or take away from any major plot points, so it can be forgiven. Kiki Layne, who plays Ellie, does the best that she can as the main human being in the film. Her chemistry with the chipmunks is wonderfully portrayed on screen, which says a lot about her acting skills considering she was likely talking to green beanbags.

Speaking of the acting, John Mulaney as Chip, and Andy Samberg as Dale, were the perfect casting choices. If they didn’t record in a booth together, it doesn’t come across in the movie. Their comedic timing and chemistry adds many great moments to this film. They are absolutely hilarious together. Throw in Seth Rogan as Bob and Will Arnett as Sweet Pete and there are a lot of laugh out loud moments. It is clear these comedians put a hundred and ten percent into these roles, and enjoyed playing these characters.

Mulaney and Samberg don’t just bring the laughs, they throw in a little bit of heart too. There aren’t any tear shedding moments, but there are some emotional ones. Every good kids movie gives the viewers some solid life lessons to walk away with, and this one is no different.

When it comes to the jokes in this movie, some of them are eye-rolling. However, the majority of them will make viewers react anywhere from giggling to full on knee-slapping laughing. The important thing is that the kids will enjoy them, even if some of them don’t hit for adults.

The trailers for Chip ‘n Dale: Rescue Rangers show just a fraction of the fun cameos that are in store for fans when they watch this movie. The list length is on par with that of Space Jam: A New Legacy. Some of them are extremely obscure, which just makes it all the more fun when you realize what property you recognize that character from. The cameos are a blast to pick out in nearly every scene as the story unfolds. There is one surprise character that absolutely steals the show, numerous times. Besides the cameos, there are also many references to other films in lines and Easter Eggs placed strategically throughout the film. These add to the fun, and don’t take away from the main plot, which is exactly as it should be.

Chip ‘n Dale: Rescue Rangers is a very family friendly movie, although there are some references to things adults will pick up on, and that will fly over kids’ heads. The mystery is pretty dark when you think about it. Toons are being physically altered in a procedure they call “bootlegging”. The darkness of the crime is right on par with the “dip” in Who Framed Roger Rabbit so children that can handle that movie, will be just fine with this.

17The runtime is just over an hour and a half, which is perfect for a film like this. The plot itself is interesting enough to hold the attention of audiences, even if it is a bit predictable. It is very much for families and kids, although adults were certainly have a good time with it as well. Yes, it drags at times, but the slow moments are sprinkled in between some incredibly fun action scenes, which helps with the pacing. For the majority of Chip ‘n Dale: Rescue Rangers audiences will be having a blast picking out their favorite characters and movie references, cheering on Chip and Dale, and laughing at the on screen antics and gags.

Tessa Smith AKA Mama's Geeky, is a journalist that covers geek and Disney culture on her own website, as well as freelances for other sites such as What's On Disney Plus and Screen Rant. She graduated Magna Cum Laude with a degree in Marketing and loves all things geeky. She is a Disney Vacation Club member and a Founders Circle Member of Disney+. She is also an approved critic for Rotten Tomatoes. Tessa lives in Upstate New York with her husband, two daughters, and two dogs named Sansa and Khaleesi.
View all posts
Tags: Chip ‘n’ dale Rescue Rangers, review