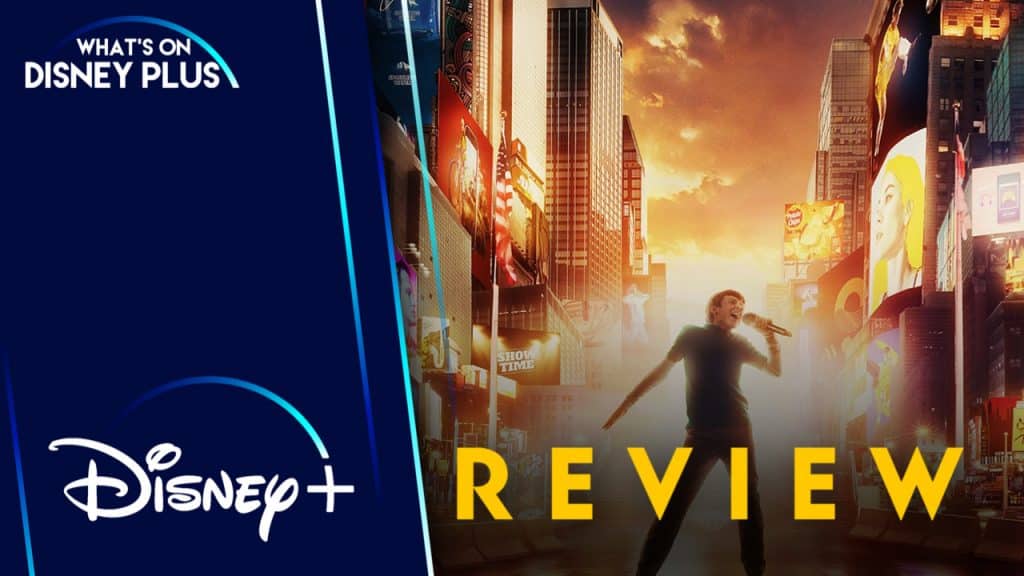 “Better Nate Than Ever” is the latest Disney+ Original Movie, which tells the story of thirteen-year-old Nate, who has big Broadway dreams.

But when he isn’t cast in the school play, he and his best friend Libby sneak off to the Big Apple to audition for “Lilo & Stitch: The Musical”, where we get to see Nate as his true self.  However, when he’s unexpectedly reunited with his long-lost Aunt Heidi, played by “Friends” Lisa Kudrow”, things take a turn as they all learn what it means to be true to themselves.  I also really enjoyed seeing “High School Musical’s” Joshua Bassett.

I could easily see this film becoming a classic entry-level musical, with some great songs, including “Big Time”, which catch the film’s vibe in one song.  This is an excellent film for the whole family, mainly because it includes big musical moments that perfectly capture the “Broadway” feel.  There is also a fantastic performance right in the middle of Times Square, that just instantly took me back there, since it just oozes that New York vibe.

It’s a film all about acceptance. Nate is a theatre kid; he loves performing and doesn’t fit in with the normal.   While the film doesn’t say Nate is gay, it’s implied, and it’s great to see how everyone completely accepts him for just being “Nate”, with no judgments and offer him their full support in chasing his dreams to be a star on the stage.

There is only one specific scene where Nate explains to his best friend, that he’s just not into her in the way she’d like him to be.  The subject is tackled subtly, with lots of care not to make the issue more significant than it needs to be.   There isn’t anything in this film that will shock parents.

Given all the controversy surrounding the LGTB+ community, “Better Nate Than Ever”, possibly couldn’t be “coming out” at the best possible time.  Since this film is all about being who you are, accepting it and wanting to live the best life possible.

“Better Nate Than Ever” is a lovely musical film for the whole family.   It’s got a great feel-good story about following your dreams, with an excellent soundtrack of original songs.  It’s a delightful film that I would recommend to anyone who loves musicals.  It might not be in the same league as “West Side Story” or “The Greatest Showman”, but it’s also a major step up from any Disney Channel Original Movie.  It’s highly recommended.

Roger has been a Disney fan since he was a kid and this interest has grown over the years. He has visited Disney Parks around the globe and has a vast collection of Disney movies and collectibles. He is the owner of What's On Disney Plus & DisKingdom. Email: Roger@WhatsOnDisneyPlus.com Twitter: Twitter.com/RogPalmerUK Facebook: Facebook.com/rogpalmeruk
View all posts
Tags: better nate than ever, review