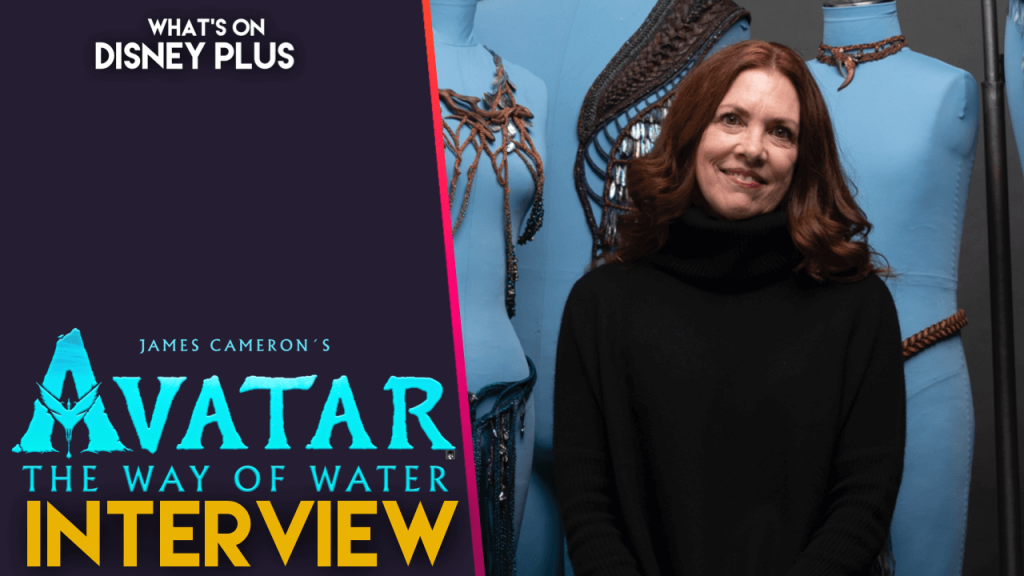 “Avatar: The Way Of Water” has quickly become one of the most successful films of all time and recently, I got to speak with the Oscar-winning costume designer, Deborah L. Scott , who has also worked on “Titanic”, “Back to the Future”, “Avatar” and “E.T”.

In a unique filmmaking effort, Scott invented a new costume paradigm, making detailed and finely crafted principal costumes and thousands of bespoke pieces and props that were then digitized for the film (one bespoke costume for each digital costume). In addition, she created the live-action costumes and helped customize the motion capture suits for the actors’ performances.
Over the course of five years, she and her team hand weaved, stitched, beaded, embroidered, and braided, using a craft-based sampling-led design process. They then blended it with the technological innovations of her collaborators at Wētā FX to help bring the Na’vi of Pandora to life.
With the creation of a unique, rich culture inspired by the indigenous craft techniques of Oceania, she achieved the following:

Could you give us a brief introduction of how you got into creating costumes for films?

Well, I started very early. When I went to college, I was studying theater, and then I very quickly started to study design, and took it from there. Did a little regional theater, Shakespeare festivals, things like that, getting my skills up. Then, had the opportunity to jump into the film business, which I always wanted to do. So, it’s been a really amazing time in the journey.

Did you have to create the costumes in real life?

Yes, we absolutely had to make them in real life. That was really dictated by a couple of things. One was Jim, because we learned from the first Avatar that you really needed that physical sample to translate to the digital world. The designs that we were going to do for 2, as I did, were very complicated, in terms of, even my drawings aren’t that accurate. The drawings don’t do it justice, so we decided that we would make all the costumes, for that reason, to give the digital people an absolute roadmap of what to follow. So, they’re absolutely 100% real, made out of all real things.

Also, we use them to inform the actors. We couldn’t use them in performance capture. I’m pretty sure your audience is familiar with that concept now, but we could put them on and do reference, and have them understand the way the costumes moved. Also, that reference video was sent to the digital people so that they could understand, their animators and their simulators could understand the movement of the costumes, because they’re so unique and the spoke in each piece is different, that there weren’t programs to tell them kind of what that was.

So, it was complicated, and it was really an amazing journey to stay with the project through the post-production, working with the digital artists to get it exactly how I wanted it. I’m very pleased with the results. I think there are a lot of talented people involved.

Did you even test the costumes underwater?

No, no. We did. Sometimes we didn’t put the absolute real garment underwater because of the damage that it would do to it, and we knew we needed it for other purposes. But, we would duplicate or replicate many, many things to see, not only how the actors felt in them underwater, but also the reference material for the digital animators to see how the costumes would flow, float, sink, however, they performed, and to get it to a level that it behaved the way Jim wanted it to behave underwater, and the way I wanted it to behave underwater. Because there’s a lot of fringe, and things like that, and it can easily get knotted up. For Jim, it has to be absolutely real. So, proof of concept is 100% the brief. So, you had to prove that it would work and look pretty. 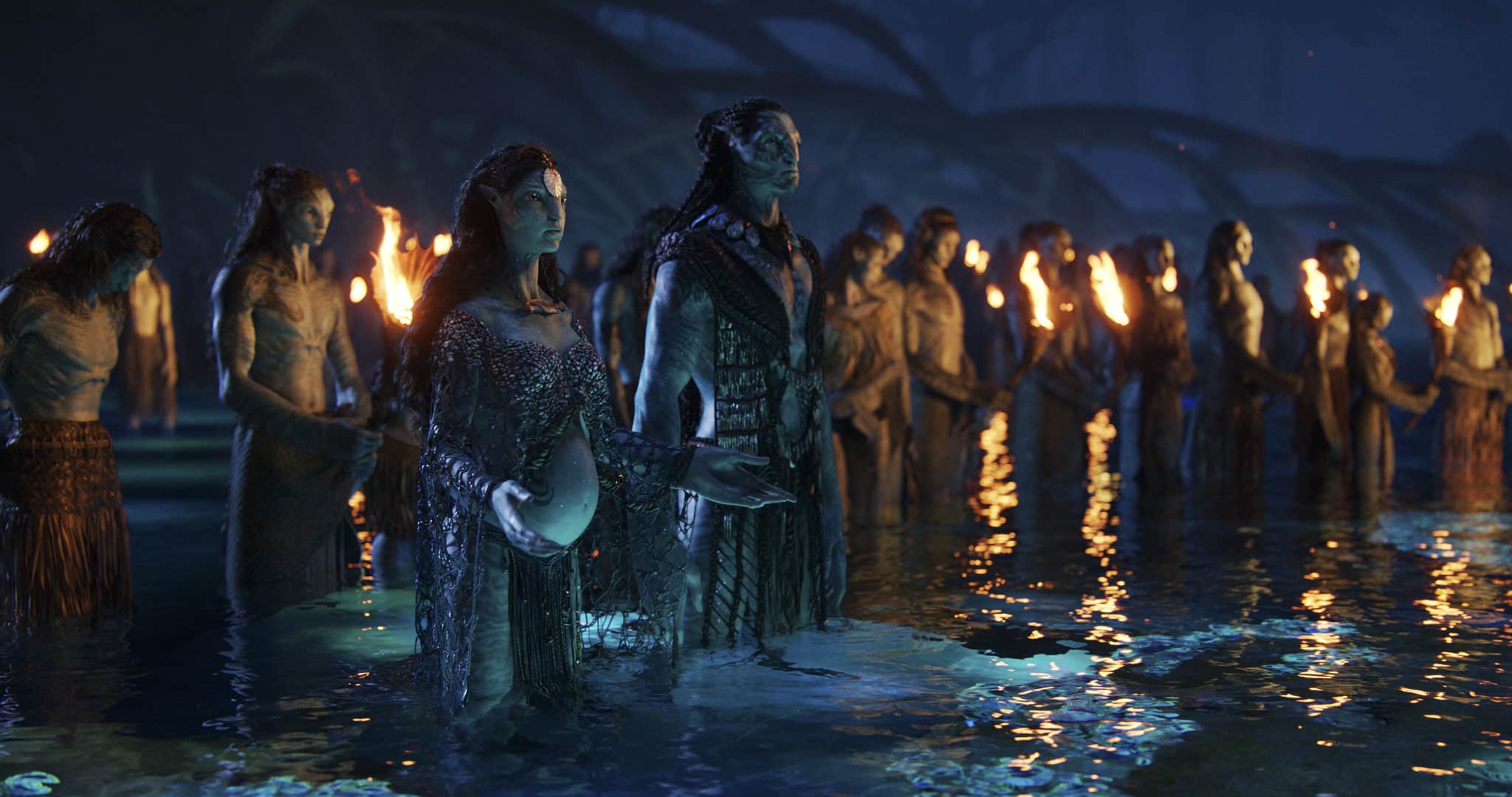 Where did the inspiration for the designs come from?

Well, a lot of it was just a lot of imagination. We did a tremendous amount of research because, again, the movie is very much based in the real world. It’s not meant to be a science fiction, strange. You’re meant to actually understand all the people, so you understand all these nine foot tall blue people as being real to us. You lose that artifice right away, that they’re a stranger or different.

We had the template from the first movie. We knew, with the Forest People, the basic rules of the guidelines for us to have for designing the costumes. Then, I was allowed to take it a lot further. So, that was really fun. The new clan, the Ocean Clan, we studied mostly indigenous peoples who live on or near the water, literally all over the world. You learn a lot of basic truths about what people do.

They tend to make their own clothing. They tend to make it from their environment, they use their environment. They’re often quite decorative. They group together as a people, so that you understand where they come from. They’re not confusing like us Western people where you’re like, “I don’t know where you’re from.” Then we settled in the warmer climate area, because Pandora is quite warm, and we knew they weren’t going to be very well-clothed.

So we settled in, I would say, greater Polynesia, which you can see mostly in the hairstyles. People don’t run around in loincloths anymore. Most of these cultures, Hawaiians, even people in Tonga and Samoa, usually it’s a skirt, in their traditional clothing. There’s a lot of departures. But I think you see it mostly in the hair, actually. The hair is extremely Polynesian, those long dark curls, with the new clan. Jim really wanted that, because he loved the way it moves underwater. He’s a great believer in motion in costume, and I think you can see it in the movie. We worked really hard on that, all through the process, to get that quite lovely and natural.

Was there much of a difference between the first and the second “Avatar” films in how you approached making costumes?

Yeah. Oh, absolutely. It was way, way more in-depth. The first one, everyone was getting to understand a tiny bit of it. There’s so many new technological advances. The abilities of the VFX people to go very in-depth. They were challenged. You’re going to have to make water. Also, then to blend the real world, the live-action shooting. Which, I did all that too, the real world where we built all the uniforms, and the masks, and all this technical stuff.

For me, it was how to make the two cultures different. But for the digi artists, they had to make sure that they could all exist in the frame at the same time, and look actually real. The goal was to make it so that, as an audience member, you could watch the movie and feel like you could literally reach out and touch what the people were wearing. That’s how real it should be.

What were the highlights of working on “Titanic”?

Well, Titanic, being James Cameron again, he’s just a stickler for detail. You’re going to have to get it 100% accurate. So, we studied. There’s just so much research that went into that. It was easier research, in a way, because we weren’t using it as a jumping-off point. We were using as actually, “Here’s the template. This is what people look like.” There’s photographs of people boarding the Titanic. It was a period where photography was that you could use it. The only thing was that most of the photography was black and white. So we had to go really in-depth and look at real garments of the time to understand the colors, and things like that.

Creating fashion for the 1900s was really easy, in a way. It was fun, but very, very detailed. The blend I did on that movie was to use real-world things, like actual period hats for one thing, which are extraordinary, and having the ability to find them, purchase them, and sometimes rehabilitate the garments. But to put those against the things that I was making, and hoping that they looked equal, that the old things didn’t look better, because they’re extraordinarily well-made, to the new things that we constructed. 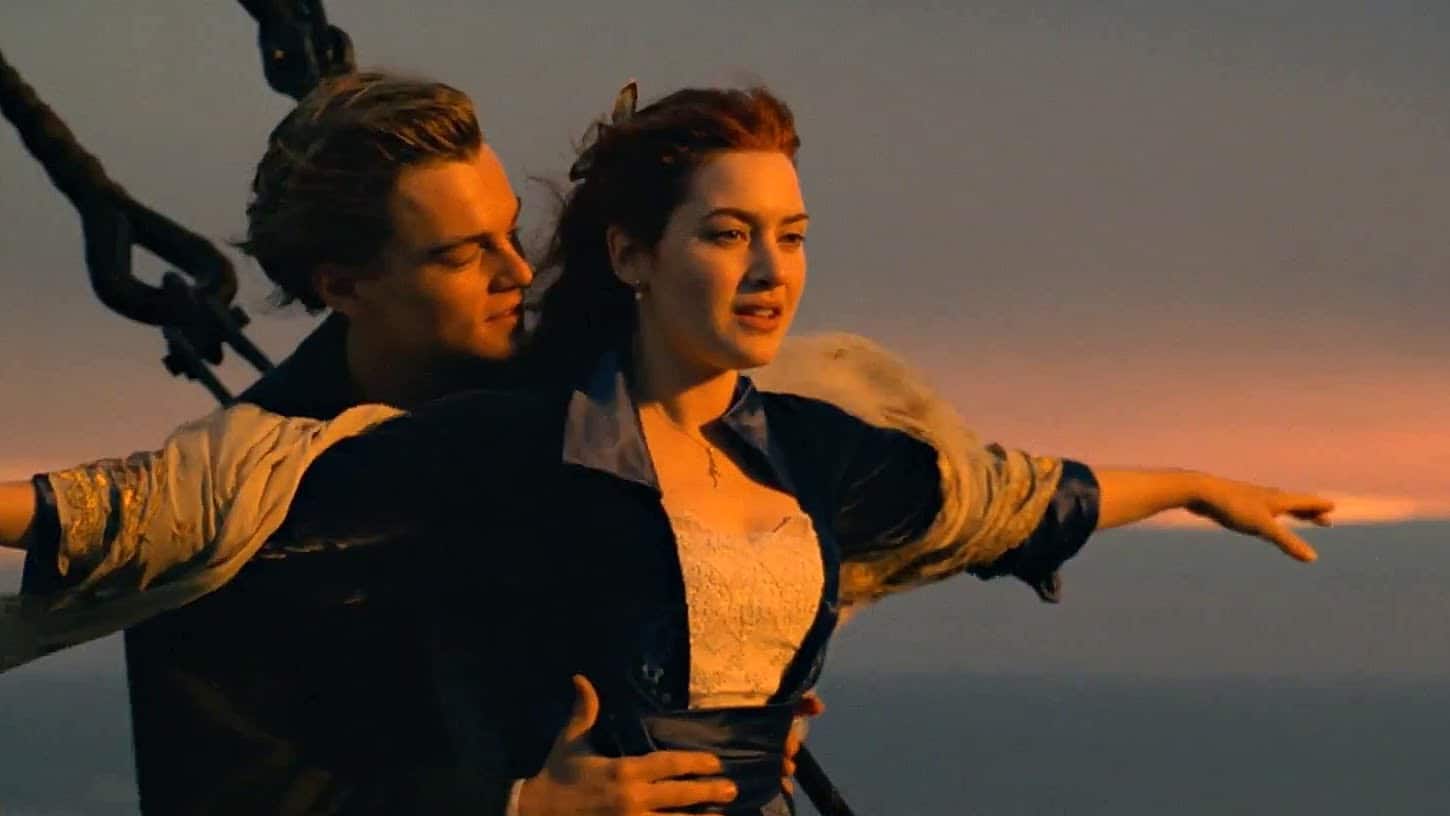 “Avatar: The Way Of Water” is in cinemas now, and “Titanic” is coming back to cinemas for Valentine’s Day.  “Avatar” is available to stream now on Disney+.

Roger has been a Disney fan since he was a kid and this interest has grown over the years. He has visited Disney Parks around the globe and has a vast collection of Disney movies and collectibles. He is the owner of What's On Disney Plus & DisKingdom. Email: Roger@WhatsOnDisneyPlus.com Twitter: Twitter.com/RogPalmerUK Facebook: Facebook.com/rogpalmeruk
View all posts
Tags: avatar, avater: the way of water, interview, titanic