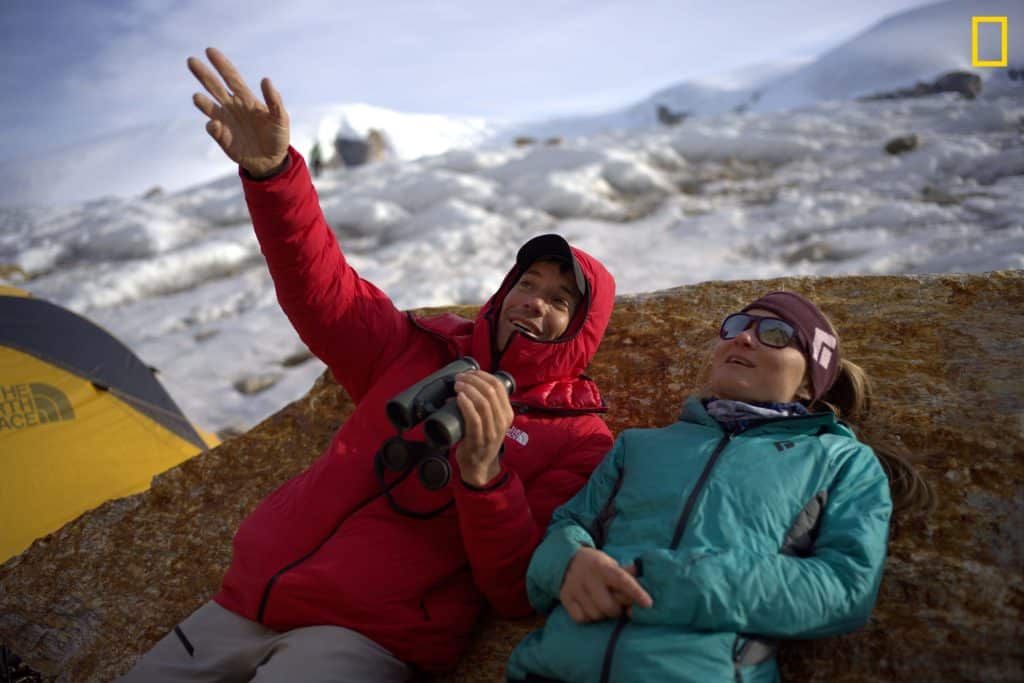 Last year, National Geographic announced it was creating a new three-part documentary series called “On The Edge With Alex Honnold”, and today, Disney has released some new details and a brand new poster for the show and stated that the show will be coming soon to Disney+.

Produced by Plimsoll Productions, “On the Edge with Alex Honnold” sees Honnold embark on a lifelong dream – an epic climbing quest across the remotest and toughest walls and peaks of Greenland, a country on the frontline of the climate crisis.

Honnold, subject of white-knuckled Oscar-winning documentary, “Free Solo” (also available on Disney+), has always dreamt of exploring Greenland and summiting its most challenging and remote peaks. But this isn’t just adventure for adventure’s sake – along the way, as he attempts a once-in-a-lifetime climbing challenge that will push his physical limits, Honnold will meet the scientists working on the frontline of climate change and witness the impacts of the rapid melting for himself.

With an overabundance of virgin climbs, impossible walls, world class and deadly, Greenland is considered the world’s last great climbing frontier and has also become the crucible of the climate crisis. In 2020, 300 billion tons of Greenland ice disappeared, the biggest annual melt in recorded history. As Honnold explores the impact that has had, he and his team will face intimidating icebergs, dangerous moulins (sinkholes on glaciers), difficult rockfalls and ice storms.

His ultimate test will come from Peak 3342, to-date unclimbed and one of the highest peaks in Greenland. Though there’s more exposed rock and less snow and ice, this is uncharted territory and Honnold will need to draw on all of his experience to reach the top safely.

Earlier this week, while filming the upcoming original series from National Geographic for Disney+, ON THE EDGE WITH ALEX HONNOLD, world-class climbers Alex Honnold (“Free Solo”) and Hazel Findlay made the first-known ascent of Ingmikortilaq, one of Earth’s tallest unclimbed natural monoliths. The cliff, composed of 3-million-year-old granite and gneiss, rises 3,750 feet out of a remote peninsula jutting into a fjord on Greenland’s eastern coast. The team began the climb from a dinghy at the base of the formation and camped out on what is known as a “shiver bivvy” — overnighting in their sleeping bags safely clipped in as they progressed up the face. Honnold and Findlay were able to free-climb the entire route of the 3-million-year-old rock. For the last 150 feet of the climb, they were able to disconnect from their ropes and walk safely to the summit.

In the lead-up to Ingmikortilaq (pronounced Ing-mick-ort-till-lack), which in Greenlandic means “the separate one,” the team was joined by ​​Dr. Heïdi Sevestre, a glaciologist working with the Arctic Monitoring and Assessment Program, and Adam Kjeldsen, a Greenlandic guide, to complete what might be the first true crossing of the critical Renland ice cap from the Pool Wall. As they traversed the Renland ice cap, Sevestre and team dragged a special radar that took real-time measurements of the depth and density of the snow and ice below them.

The team approached the “4000-foot wall that came straight out of a fjord” in ocean-up style, according to Honnold, meaning they rowed a dinghy from a nearby land basecamp to the monolith and began their dramatic ascent. From there, Honnold and Findlay expertly navigated a route up the steepest and tallest section of the wall, by Tuesday reaching the 3,750-ft tall summit – approx 750 ft higher than El Capitan, and almost three times the height of the Empire State Building. 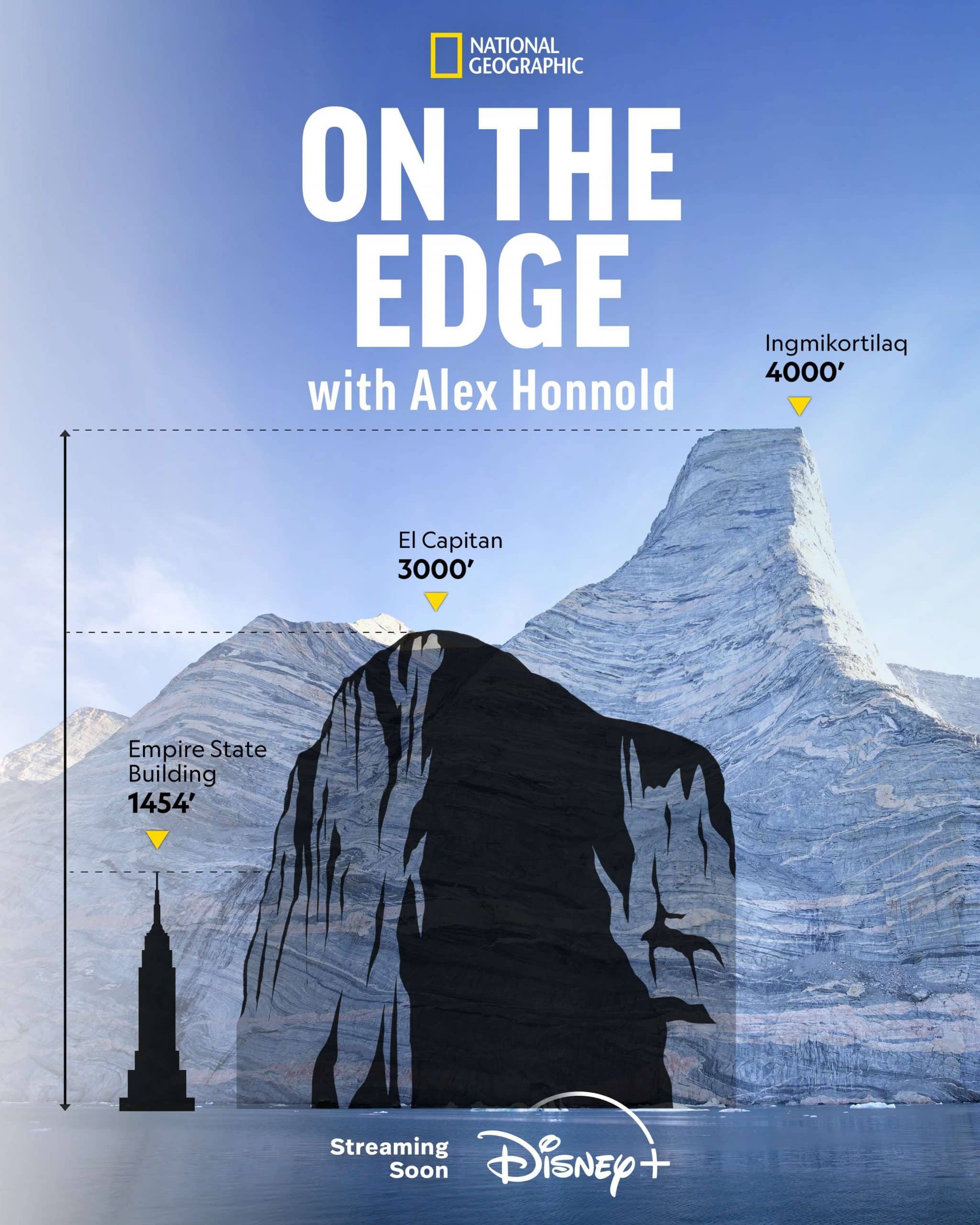 Honnold is a professional adventure rock climber whose audacious free solo ascents of America’s biggest cliffs have made him one of the most recognized and followed climbers in the world. He is also the founder of the Honnold Foundation, an environmental nonprofit devoted to fighting climate change by promoting solar energy for a more equitable world. A gifted but hard-working athlete, Alex “No Big Deal” Honnold is known as much for his humble, self-effacing attitude as he is for the dizzyingly tall cliffs he has climbed without a rope to protect him if he falls. Honnold has been profiled by “60 Minutes”and The New York Times, featured on the cover of National Geographic, appeared in international television commercials and starred in numerous adventure films, including the Academy Award-winning documentary feature “Free Solo”, released by National Geographic Documentary Films, and the Emmy-nominated “Alone on the Wall.” He is also the co-host and co-creator of the chart-topping podcast Climbing Gold. Honnold is sponsored by The North Face, Black Diamond, La Sportiva, Ando and Stride Health and is a board member of El Cap Climbing Gyms. To this day, he maintains his simple “dirtbag-climber” existence, traveling the world in search of the next great vertical adventure.

“On the Edge with Alex Honnold” will be produced by Plimsoll Productions for National Geographic. For Plimsoll Productions, James Smith, Martha Holmes and Grant Mansfield are executive producers. For National Geographic, Bengt Anderson is executive producer and vice president, production and Alan Eyres is senior vice president, production and development.

Roger has been a Disney fan since he was a kid and this interest has grown over the years. He has visited Disney Parks around the globe and has a vast collection of Disney movies and collectibles. He is the owner of What's On Disney Plus & DisKingdom. Email: Roger@WhatsOnDisneyPlus.com Twitter: Twitter.com/RogPalmerUK Facebook: Facebook.com/rogpalmeruk
View all posts
Tags: on the edge