What's On Disney Plus > Blog > Brands > Disney > The Wonderful World of Mickey Mouse Episode 2: The House of Tomorrow Review

In the second episode of the “The Wonderful World of Mickey Mouse” original series on Disney+, Mickey, Donald and Goody visit Professor Von Drake’s new house of tomorrow and get an early sneak peak that turns disastrous. The house tries to anticipate their every need but becomes jealous when the house learns of Minnie. The trio are only able to defeat the house when Goofy can’t decide what he needs and unveils all of his needs at once causing the house to catch fire.

This series of shorts looks to have something for everyone. One episode after being set in the old west, it moved to a futuristic setting. While I personally liked the “Cheese Wrangler” episode better, both showed they will be wacky and zany. I can’t wait to see where this series of shorts goes.

There’s some nice call backs to other Disney properties in this 8-minute short. The entire setting is reminiscent of Tomorrowland at the Disney Parks. Also, it’s very similar to the futuristic setting of the mid-2000s Walt Disney Animation Studios film, “Meet the Robinsons.” The mid-2000s were a weird time for Disney as it looked to evolve from the musicals of the Renaissance but hadn’t found its groove with the Revival. However, I think “Meet the Robinsons” is an underrated gem from that time frame. 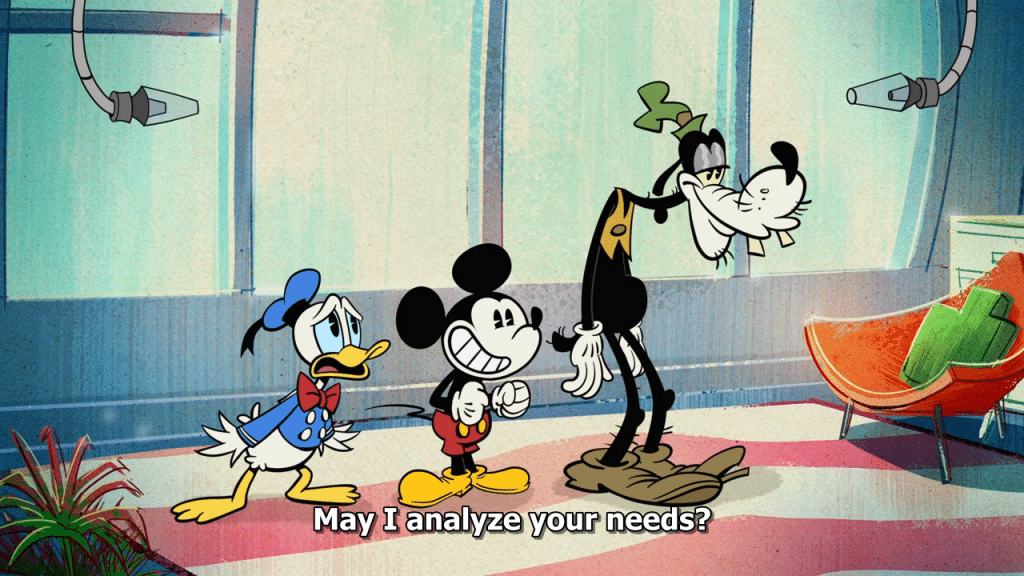 If I have one complaint about this series of shorts, it’s the way Goofy is drawn. It really doesn’t appeal to me. Mickey, Minnie and Donald all look pretty much the same as they did before. Goofy looks different. Maybe it’ll grow on me, but it hasn’t appealed in the first two shorts. Bill Farmer still does an excellent job voicing the character. He sounds and acts like the goofy of old, he just looks different.

Overall, I’m enjoying this series of shorts. The first two were really good and I want to see more. The first episode was more entertaining to me. But, there’s a lot of good stuff here for any Mickey fan.

Jeremy has been a big Disney fan since he was a kid growing up during the Disney Renaissance. One day he hopes to go to every Disney Park in the world.
View all posts
Tags: “The Wonderful World of Mickey Mouse”, disney, Disney+ Original