The mouse that started it all is back in a new series of shorts exclusively on Disney+. “The Wonderful World of Mickey Mouse” is basically a continuation of the Mickey Mouse shorts that ran on Disney Channel during the 2010s with a similar animation style. It’s grittier and less polished than what you’ll find in Disney Jr. shows like “Mickey Mouse Clubhouse” and “Mickey and the Roadster Racers.” But, it’s still a lot of fun.

The first episode is called “Cheese Wranglers.” In the 9-minute short, Mickey is a wrangler hired by Minnie to get her wheels of cheese to the market. He takes Minnie’s two farm hands, Donald and Goofy, with him as he drives the herd. But, along the way, a cheese rustler; played by Pete; uses a group of weasels to steal the herd. Mickey, Donald and Goofy must get the herd back and wrangle them the rest of the way to the market to meet up again with Minnie. 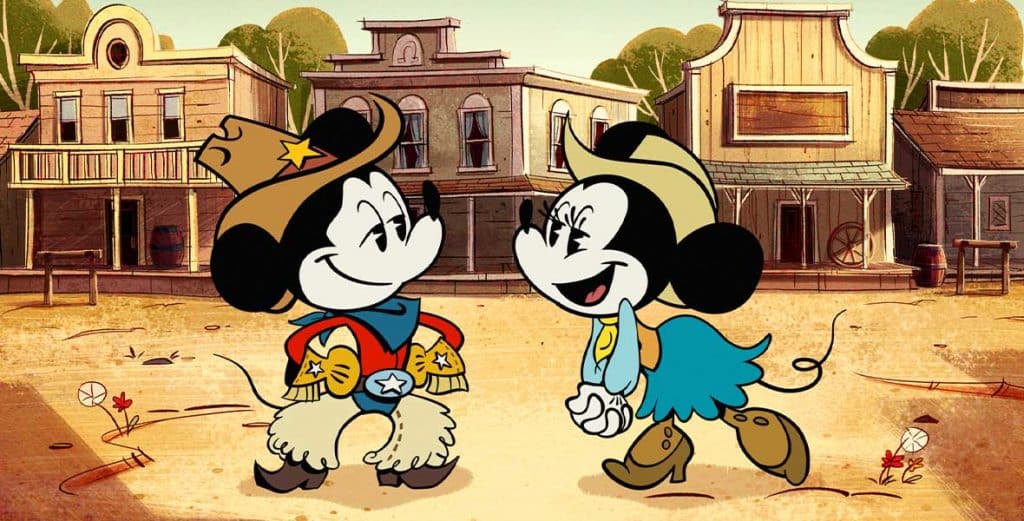 It’s a fun little short that evokes some of Disney’s best and Disney’s worst. The old west setting harkens back to the mid-2000s and “Home on the Range.” If you read my “Home on the Range” review, you know that I believe it to be the worst movie I’ve ever seen from Disney’s primary animation studio. This is a far more enjoyable representation of the old west. Although, it still doesn’t hold up to the “American Tail” films made by a competing company in the 1980s. Meanwhile, the weasels are eerily reminiscent to Disney’s retelling of “The Wind in the Willows” from “The Adventures of Ichabod and Mr. Toad.” They are more fun here than they were in the 1940s. And, as Mickey frees the cheese wheels from Pete, he plays a song on his tail in a similar manner to how he played the cat way back in the 1920s in “Steamboat Willie.” This is a nice callback to a classic while improving upon it by removing the animal cruelty aspect.

It’s got some nice Easter Eggs and was a lot of fun. I watched it with my 9-year-old son and he seemed to really enjoy this short a lot better than any Mickey Mouse shorts he’s seen in a while. He’s outgrown the Disney Jr. Mickey Mouse shows and the ones that ran on Disney Channel were a little too grown up for him for a while. This continuation comes at the exact right time for him, while still being enjoyable for me.

Jeremy has been a big Disney fan since he was a kid growing up during the Disney Renaissance. One day he hopes to go to every Disney Park in the world.
View all posts
Tags: “The Wonderful World of Mickey Mouse”, Cheese Wranglers, disney, review