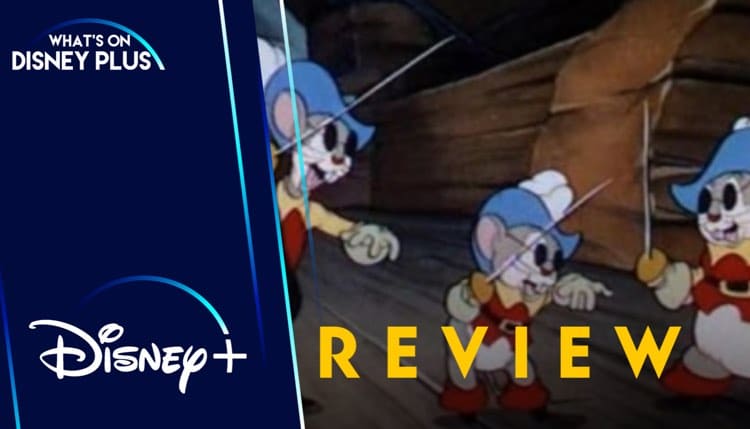 The three blind mice meet the three musketeers in the 1936 Walt Disney Animation Studios short, “The Three Blind Mouseketeers.” In this eight minute short, Captain Cat is trying to set a trap for the Three Blind Mouseketeers. But the Mouseketeers keep avoiding the traps intended to capture them by luck and chance since they can’t see that he’s set a trap for them. They eventually wake him up when accidentally hitting him with wine corks. And, as he tries to capture them, they keep accidentally finding ways to scare him or beat him before finally escaping.

I didn’t know what to expect when watching this short, but it was a lot of fun. I love the physical comedy that you can work into animation because no one will get hurt and this is one of the best I’ve ever seen from the 1930s. It’s another one of those shorts where everything is completely predictable and yet still amazingly funny. My favorite part was when the cat managed to catch one of the Mouseketeers tails, but he was surrounded by glass bottles. When he kept jumping up in the air saying “All for one and one for all,” his reflection in the bottles made it look like there were nearly 100 mouseketeers rallying before attacking. That scared the cat he turned tail and ran. It was funny and perfect for the story they were telling. I wish I had scene this short before because I genuinely enjoyed myself. I don’t know if the Three Blind Mouseketeers return, but I really hope they do. I want to see them escaping more impossible scenarios by accident and sheer luck. I don’t want to see them too often because eventually there would be diminishing returns, but I wouldn’t mind seeing them reappear every once in a while.

There’s no reason for me to like this one as much as I do, but I just really enjoyed myself while watching this short. Is this the absolute best early animated short I’ve seen from the Walt Disney Animation Studios? No. These characters are not on par with Mickey, Minnie, Goofy, Donald or Pluto. But, it was a lot of fun.

What did you think of “The Three Blind Mouseketeers?”

Jeremy has been a big Disney fan since he was a kid growing up during the Disney Renaissance. One day he hopes to go to every Disney Park in the world.
View all posts
Tags: disney, retro review, review, The Three Mouseketeers, Walt Disney Animation Studios