The bare necessities of life will come to you. Jon Favreau takes one of the most beloved Disney classics and gives it the live action/CGI remake and, quite honestly, “The Jungle Book” is one of my favorite of the live action Disney remakes.

Much like “Beauty and the Beast,” “The Lion King” and “Aladdin,” “The Jungle Book” is essentially a shot for shot remake of the original animated classic. While that can be hit or miss; “Beauty and the Beast” was a hit with me, “The Lion King” was a miss; this one was a definite hit. Jon Favreau is one of my favorite directors and he’s the one I would trust with most of the live action remakes, even if I didn’t enjoy his version of “The Lion King.” I think he perfectly captures the essence of what made animated version of “The Jungle Book” and turned it into an excellent version.

The CGI animals in this film are spectacular. While some movies with this many animals is quite obviously CGI, the effort in this film made them look very believable. Bagheera, Baloo, Shere Khan, Kaa and all the rest shine here. I can tell what emotions they are expected to convey at the right times. That is sometimes an issue with CGI animals, but here they got it done right. 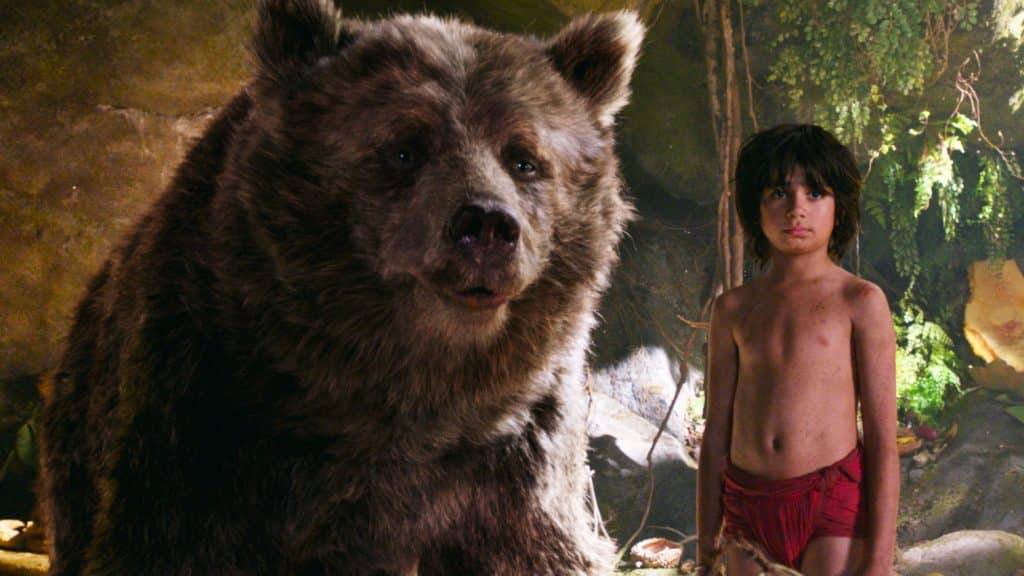 This is an all star cast that was amazingly well done. Ben Kingsley as Bagheera, Bill Murray as Baloo, Scarlett Johansson as Kaa and Idris Elba as Shere Khan were all excellent voicing these characters. If I have one complaint in the cast, it’s Giancarlo Esposito as Akela the leader of the wolf pack. I like Esposito in most roles I’ve seen him in, but they’ve all been villainous. From “Breaking Bad” to “Revolution” to “The Mandalorian,” Esposito excels as a villain. Akela is not a villainous role. Maybe that’s why I just don’t care much one way or another about the character. Esposito does a perfectly fine job, but he doesn’t stick out as much as I’m used to. Maybe, if he and Elba were swapped and he played Shere Khan while Elba played Akela, he would stand out, but then we would lose Elba’s excellent portrayal Shere Khan, so I don’t really know what to choose here. Overall, an excellent job by an excellent cast.

The other complaint I have with this film is with the song “The Bare Necessities.” It’s one of my all time favorite songs in the Disney canon. It’s amazing and several of its covers have been excellent, as well; see the Zach Brown Band’s performance at the Mickey Mouse 90th Birthday Celebration; but this one falls flat. The song is performed admirably, but it doesn’t come through the way the filmmakers intended. On the other hand, I think I enjoy this version of King Louie’s “I Want To Be Like You” more than the original. It’s my absolute favorite moment of this movie.

What did you think of the live action version of “The Jungle Book?”

Jeremy has been a big Disney fan since he was a kid growing up during the Disney Renaissance. One day he hopes to go to every Disney Park in the world.
View all posts
Tags: disney, live action remake, review, The jungle book