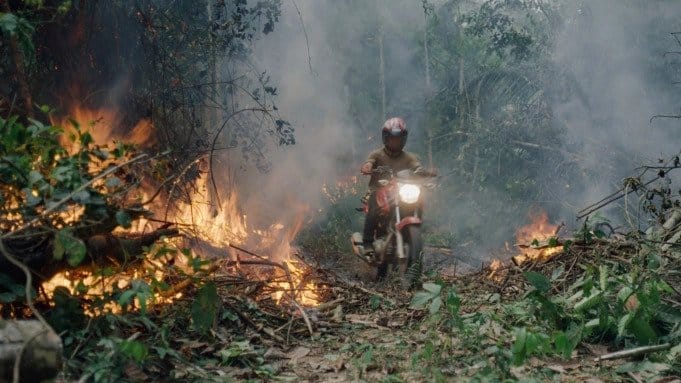 This documentary is about the Indigenous Uru-eu-wau-wau people, who have seen their population dwindle and their culture threatened since coming into contact with non-Native Brazilians. Though promised dominion over their own rainforest territory, they have faced illegal incursions from environmentally destructive logging and mining, and, most recently, land-grabbing invasions spurred on by right-wing politicians like President Jair Bolsonaro. With deforestation escalating as a result, the stakes have become global.

With unprecedented access, and co-produced by the Uru-eu-wau-wau community, The Territory drops the audience into the center of this conflict. Young Indigenous leaders like Bitate and Ari, along with their mentor, environmental activist Neidinha, risk their very lives to defend the rainforest. On the other side, Sergio leads an association of indigent farmers eager to establish a settlement, while others like Martin, impatient and entitled, strike out on their own, clear-cutting the forest to establish a homestead. With the government unwilling to stop this brazen encroachment, the Uru-eu-wau-wau set up their own media team, using technology to expose the truth and fight back.

“The Territory is an urgent story of courage and resilience, beautifully told by first-time feature director Alex Pritz. We are honored to bring the story of the Uru-eu-wau-wau people to the world and help further the conversation and raise awareness around the endangered Amazon rainforest and its indigenous people.

We are equally excited to be working with our longtime friend Sigrid Dyekjær whose talent for shepherding stories of impact and advocacy is unprecedented and with our frequent collaborator Darren Aronofsky, a visionary storyteller with an unmatched eye for breakthrough talent.”

“The Territory” is the debut feature film from director Alex Pritz and has been co-produced by the Indigenous Uru-eu-wau-wau community, with activist Txai Suruí onboard as an active executive producer. The project is produced by award-winning filmmaker Sigrid Dyekjaer (THE CAVE), Darren Aronofsky’s Protozoa Pictures (THE WRESTLER, BLACK SWAN, WELCOME TO EARTH), and Passion Pictures (THE RESCUE), along with Will N. Miller, Lizzie Gillett and Gabriel Uchida. “The Territory” has been made by Documist, Associação Jupaú do Povo Uru-eu-wau-wau, Real Lava, Passion Pictures and Protozoa Pictures in association with TIME Studios and XTR with backing from Luminate and Doc Society.

Initial praise for  “The Territory” was strong out of Sundance with Variety describing it as “urgent,” “riveting” and “sharply crafted,” while Indiewire praised it as “Gorgeously [and] ingeniously conceived,” noting the film “[paints] an intimate first-hand portrait of joy, pain, and community, before bursting with rip-roaring intensity as it captures a high-stakes struggle for survival unfolding in the moment.”

Additionally, the team behind  “The Territory” will launch an impact campaign with the goal of elevating Indigenous voices and fighting deforestation through nature and community-based solutions. Among multiple tactics and partnerships, they will support global Indigenous-led efforts to hold the international community accountable for the protection of the Amazon rainforest and cessation of violence against land defenders worldwide.

National Geographic will be releasing the documentary later this year in cinemas before being released on Disney’s streaming services, which include Disney+, Hulu and Star+.

Roger has been a Disney fan since he was a kid and this interest has grown over the years. He has visited Disney Parks around the globe and has a vast collection of Disney movies and collectibles. He is the owner of What's On Disney Plus & DisKingdom. Email: Roger@WhatsOnDisneyPlus.com Twitter: Twitter.com/RogPalmerUK Facebook: Facebook.com/rogpalmeruk
View all posts
Tags: the territory